We’ve rounded up the best Dallas Cowboys quotes in a celebration of football and America’s team. There’s a whole lot to dig into here for any Cowboys fan, so take your time.

But, if you’re in a hurry, check out our Top 10 which we’ve conveniently located at the top of the list.

2.) If ifs and buts were candy and nuts, we’d all have a Merry Christmas.
Don Meredith

5.) More than any other sport, football is a team-oriented game.
Emmitt Smith
6.) I’m a strong believer that you practice like you play, little things make big things happen.
Tony Dorsett

7.) We’re the glitz and the glamour of the NFL. We want to kick their you know what with glitz and glamour.
Jerry Jones

8.) Terry Bradshaw couldn’t spell cat if you spotted him the c and the t.
Thomas “Hollywood” Henderson

9.) Mommas, let your babies grow up to be left tackles.
Gil Brandt

10.) Texas stadium has a hole in its roof so God can watch his favorite team play.
Unknown 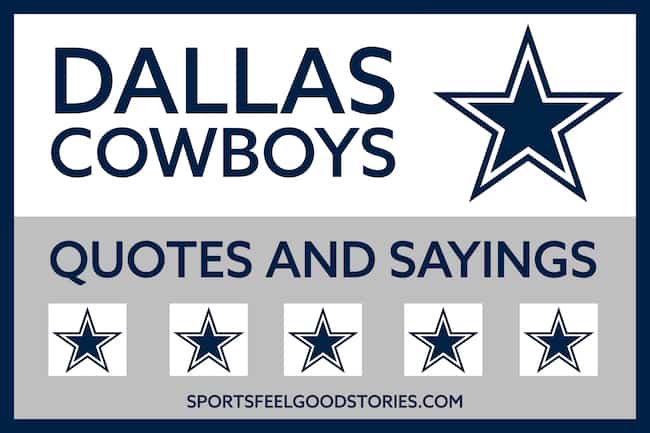 11.) Tom Landry is such a perfectionist, if he was married to Raquel Welch, he’d expect her to cook.
Don Meredith

12.) You wouldn’t want to see the size of the check that I would write if it would for sure get the Dallas Cowboys a Super Bowl.
Jerry Jones

13.) When I die, I want to come back as Bobby Layne’s chauffeur.
Don Meredith

Check out: Cowboys Schedule for 2019.

14.) You can have the talent at one level, but when you get to the next level, it just doesn’t happen. It’s like a young guy selling insurance. One year, he sells $6 million of life insurance, and then his bosses say, ‘Wait until he really learns how to sell.’ But then he’s got a boat and a country-club membership, and all of a sudden, he’s not as good. That’s what happens with players.
Gil Brandt

15.) I just took the good and the bad from all of the coaches I’ve been around.
Charles Haley

16.) You find stable, quality players who can grow within your system. Part of our success was that the heroes lived in the area and were there this season and also tomorrow, you create your own tradition and heritage.
Tex Schramm

17.) The only thing worse than a coach or CEO who doesn’t care about his people is one who pretends to care. People can spot a phony every time.
Jimmy Johnson

18.) One thing I can say about the Dallas Cowboys: They have always had talent around them. They have been one of the most talented football teams in all of football.
Emmitt Smith

19.) Leadership is getting someone to do what they don’t want to do, to achieve what they want to achieve.
Tom Landry

20.) I understand what’s expected of me. I understand the lineage for the running back position of the Dallas Cowboys.
Ezekiel Elliott 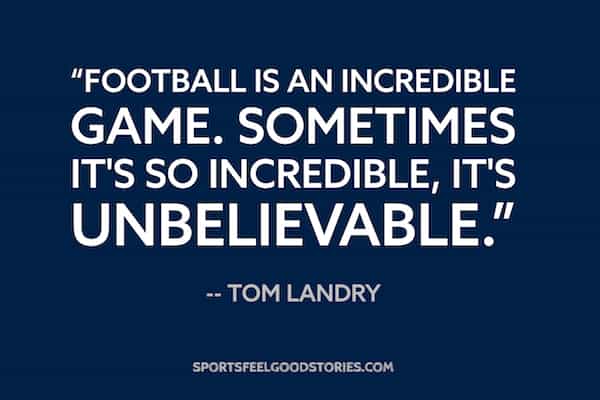 21.) There are 500 coaches who could have won the Super Bowl with our team.
(On the firing of Jimmy Johnson from owner Jerry Jones perspective.)

22.) Just about as low as a crippled cricket’s ass.
(On losing players to injuries.)

23.) I know more about pigs than Mark does. I was taught as a Razorback to be lean and mean, not a little fat pig.
(On Cuban’s criticism of the NFL’s greed.)

What did Jerry Jones say?

24.) Disloyalty… I couldn’t handle the disloyalty. Whether it was right or not, by every measurement you can go, I had paid so many times a higher price to get to be there than he had paid, it was unbelievable I’d rather have won that one with Barry 10 times more than doing the same thing with Jimmy, a thousand times more than having done the same thing with Jimmy. Just simply because I guess I am still that damn frustrated with the way everything happened with Jimmy.

25.) I intend to have a complete understanding of contracts, jocks, socks, and TV contracts. There’s no way I can look in the mirror if I don’t understand anything about this business. 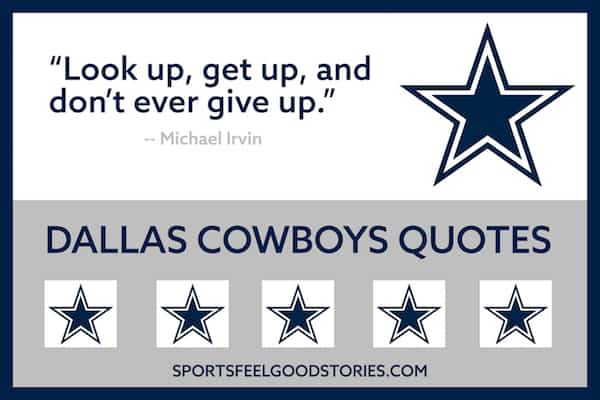 27.) I don’t think I can fully explain what happens when you take on the role of the quarterback of the Dallas Cowboys. Sometimes, I can’t even explain it to myself.
Troy Aikman — Check out more Troy Aikman Quotes & Net Worth.

28.) We would bring in more free agents than half a dozen other teams combined, and we were very active in scouting the smaller schools. No other team was putting that effort into those schools, and it paid off again and again for us.
Tex Schramm

29.) The Cowboys are the Notre Dame of professional football.
No matter where they play, their fans are there to greet them.
Their faces are recognized by fans all across this country.
The sum total of their stars are a galaxy.
They are the Dallas Cowboys… America’s Team.
Bob Ryan 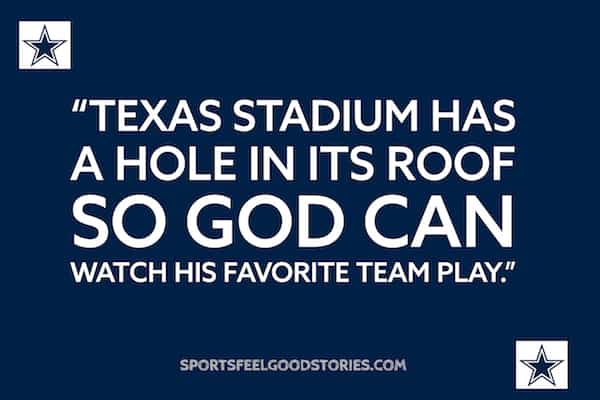 34.) As for me and my family, we will always back the star.
Unknown

35.) You can’t help miss something you’ve done since you were 8 years old, my body was saying it was time to play football.
Randy White

36.) I don’t think about it, ‘Wow! I’m the quarterback of the Dallas Cowboys.’ For me, this is my job. This is what I’ve been preparing to do. And I really want to win badly.
Tony Romo

37.) In any team sport, the best teams have consistency and chemistry.
Roger Staubach

38.) I attribute my entire football career, as far as getting me started, getting me interested, keeping me that way was my father. He went to every game even though he was crippled and wasn’t real healthy.
Bob Lilly

39.) A win’s a win. We have to build off this and continue to grow. Winning these games and playing the way we did against Washington, nobody scares us in this division.
Jason Witten

40.) This is a tremendous honor to be here. I really loved everything Coach Landry stood for.
Rayfield Wright

41.) Treat a person as he is, and he will remain as he is. Treat him as he could be, and he will become what he should be.
Jimmy Johnson

43.) I don’t think being too smart can ever hurt you. All you have to look at is what kind of competitor he is. This guy is one of the great competitors of all time.
Gil Brandt

44.) Give people enough guidance to make the decisions you want them to make. Don’t tell them what to do, but encourage them to do what is best.
Jimmy Johnson

45.) If you were to see me as a cheerleader, that would mean I was only watching instead of thinking.
Tom Landry
46.) Tom had icicles an inch and a half long sticking down from either nostril. He looked a little weird.
Lee Roy Jordan, on playing in the Ice Bowl in Green Bay
47.) Winning isn’t getting head of others. It’s getting ahead of yourself.
Roger Staubach

48.) It takes absolutely no talent to hustle or compete. Set that standard.
Head Coach Jason Garrett
49.) When my number’s called, I’m going to do my job. That’s the way I look at it.
Dez Bryant
50.) I think Deion really did revolutionize the man-to-man football game of taking half the field away. What he did in essence was outrun the football. If you threw the ball his way, he would outrun the ball.
Ray Horton
51.) I want to go where I’m the difference. (And) I want to make something out of nothing. I want to be the reason someone is great.
Dak Prescott (Prior to his first training camp)
— Mike O’Halloran
O’Halloran, editor of Sports Feel Good Stories and a former contributing writer to USA Football (the Youth arm of the NFL), compiled these Cowboy quotes.