Our collection of funny Ezekiel Elliott Fantasy Football Names will give you some things to think about if you were lucky enough to draft this phenomenal back. At Ohio State University, he was second only to the famous Archie Griffin in terms of career yards and yards per game.

The fourth overall pick in the draft by the Dallas Cowboys, Elliott had a sensational rookie season earning all-pro honors. Only 21 years old as a rookie, he looks to have many great seasons ahead of him.

Check out our cool and funny Ezekiel Elliott fantasy names.

Get your Zeke On.

Zeke and Ye Shall Find the End Zone. 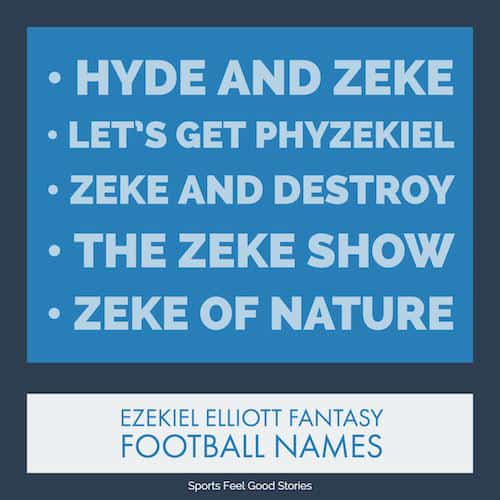 The Book of Ezekiel.

If you have any suggestions for cool and funny Ezekiel Elliott fantasy team names, please let us know via our Contact page. Thanks!

Elliott surpassed both Tony Dorsett and Herschel Walker by rushing for 1,631 yards in his rookie season. That total also led the NFL.

How to Pick a Good Team Name Video

Have More Fun in Your Fantasy Football League