John McKay’s press conferences after Tampa Bay football games are the stuff of legend. These quotes below reflect that. Enjoy!

When asked about his team’s execution: “I’m in favor of it.”

We didn’t tackle well today but we made up for it by not blocking.

Intensity is a lot of guys that run fast.

We’ve broken down the expansion teams and they’ve averaged winning 2.7 games their first year, which to me is rather difficult. I figured out the 2, but the .7 has got me wondering what the hell is going on.

Emotion is highly overrated in football. My wife Corky is emotional as hell but can’t play football worth a damn.

Kickers are like horse manure. They’re all over the place.

If you have everyone back from a team that lost ten games, the experience isn’t too important.

On how coaching an expansion team is like a religious experience: “You do a lot of praying, but most of the time the answer is ‘no.’

I’ll probably take a little time off and go hide somewhere. We will be back. Maybe not this century, but we will be back and we will be a better football team.

On the Buccaneers ineffective special-teams play, “They were absolutely horrible and that’s the best thing I can say. Besides that they were bad. These people are not poorly paid you know.

On the Joe Namath’s play during the Jets 34-0 victory over Tampa Bay, “Namath is still Namath, but I must say that our guys were nice to him. I noticed when they knocked him down, they helped him to his feet. That was gentlemanly. I thought one stood around long enough to get his autograph.”

There were times I felt like leaving the stadium and hitchhiking home. (On how badly the Bucs looked in losing to the Steelers 42-0)

When he heard that one of the kickers during training camp, Pete Rajecki, had said he was nervous kicking in front of his coach, McKay asked that the press “Tell Mr. Rajecki that I plan to attend all the games.”

If a contest had ninety-seven prizes, the ninety-eighth would be a trip to Green Bay.

Mike has authored 3 coaching books and is the publisher of Sports Feel Good Stories. 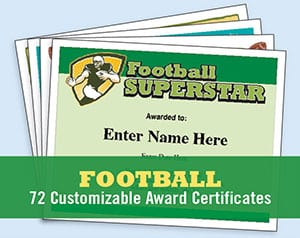