Our Jordy Nelson fantasy football team names might be used by the sentimental owner to recognize this retired wide receiver.

The former Packer and Raider will now be focused more on tractor routes than post routes, but everyone should take a minute to appreciate what a player he became. 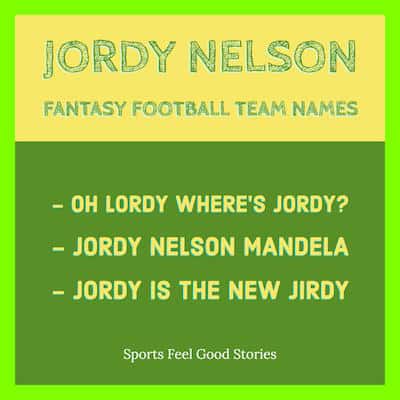 Jordy is the new Jirdy.

Nelson won the National AAU Championship at the age of 10 for the 400 meters.

He started a foundation called the Nelson Family Community Foundation to benefit families where he lived in Kansas.

Jordy played QB in high school and pulled double duty as a defensive back.

He attended Kansas State and was set to play defensive back, but was moved to wide receiver.

When football season is over, Jordy returns to the family farm and works hard. He’ll put in 12 hour days at times.

Nelson grew up on the family farm that has been in his family for four generations.