Matthew Stafford Fantasy Football team names place their brand behind the former Georgia Bulldogs QB who has gone on to have more than a few good seasons with the Detroit Lions. 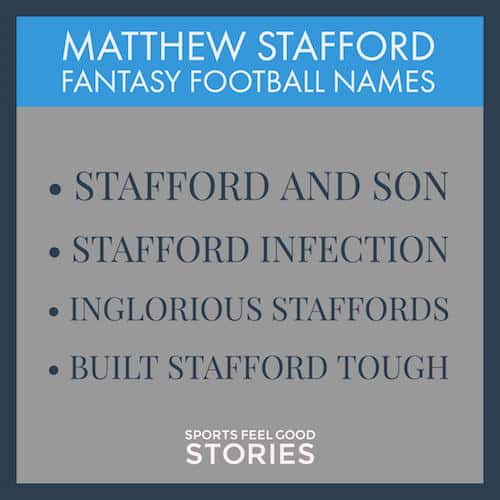 The Lions are owned by Martha Ford, one of the few female owners in the NFL. She took over the helm after her husband William Clay Ford passed away.

The Lion’s last championship was in 1957. Let’s just say, it’s been too long.

Check out Stafford’s career stats with the Lions

2.) One of only four quarterbacks to throw for over 5,000 yards in a single season.

3.) He’s the oldest of five siblings.

5.) He was the youngest quarterback in the NFL to throw five touchdown passes in a single game.

10.) Stafford married Kelly Hall, a cheerleader at the University of Georgia when he played football there.