Oh yeah, these Rob Gronkowski fantasy football names might have you thinking nostalgically as the Gronk announced his retirement. But, maybe, you pick one of his names for old time sakes.

Gronk! In the rich tradition of great football names like Butkus, Nagurski, and Nitschke, Mr. Gronkowski’s surname is made for football. Because of that, if you get Rob on your fantasy team, you’ll want to look for ways to leverage the Gronk.

Take a gander at these funny Rob Gronkowski fantasy names. 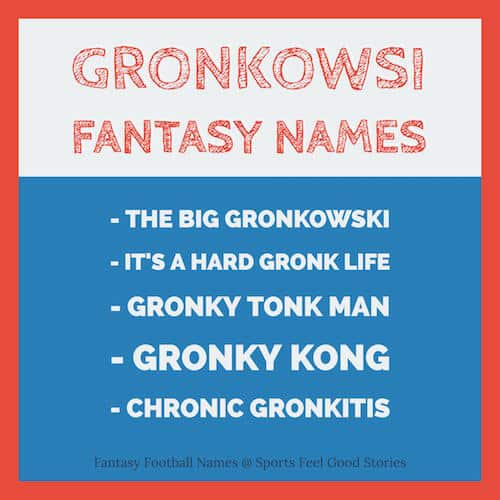 Beyond football, what other sport was Gronkowski offered a college scholarship in? Gronk started at center for his high school team and had offers to play basketball in college. Three of the Gronkowski brothers played in the NFL. Rob was selected in the second round of the NFL Draft.

Check out the Fan Guide for the New England Patriots.

The Big Bronkowski. (Brady and Gronkowski)

Gronk if you love Touchdowns!

He’s the youngest NFL player with 3 TD’s in a game. He accomplished it at 21 years of age. He was also the first tight end to lead the league in receiving touchdowns. It would seem he’s a virtual lock for the Football Hall of Fame.

Check out these other New England Patriots Football Team Names.