You are here: Home / Sports Poetry

Sports Poetry goes hand-in-hand with sports. Read from our selection below.

Casey at the Bat

The outlook wasn’t brilliant for the Mudville nine that day;
The score stood four to two with but one inning more to play.
And then when Cooney died at first, and Barrows did the same,
A sickly silence fell upon the patrons of the game.
A straggling few got up to go in deep despair. The rest
Clung to that hope which springs eternal in the human breast;
They thought if only Casey could but get a whack at that —
We’d put up even money now with Casey at the bat.

But Flynn preceded Casey, as did also Jimmy Blake.
And the former was a lulu and the latter was a cake;
So upon that stricken multitude grim melancholy sat.
For there seemed but little chance of Casey’s getting to the bat.
But Flynn let drive a single, to the wonderment of all,
And Blake, the much despised, tore the cover off the ball;
And when the dust had lifted, and the men saw what had occurred,
There was Johnnie safe at second and Flynn a-hugging third.

Then from 5,000 throats and more there rose a lusty yell;
It rumbled through the valley, it rattled in the dell;
It knocked upon the mountain and recoiled upon the flat,
For Casey, mighty Casey, was advancing to the bat.

There was ease in Casey’s manner as he stepped into his place,
There was pride in Casey’s bearing and a smile on Casey’s face.
And when, responding to the cheers, he lightly doffed his hat,
No stranger in the crowd could doubt ’twas Casey at the bat.

Ten thousand eyes were on him as he rubbed his hands with dirt;
Five thousand tongues applauded when he wiped them on his shirt.
Then while the writhing pitcher ground the ball into his hip,
Defiance gleamed in Casey’s eye, a sneer curled Casey’s lip.

And now the leather-covered sphere came hurtling through the air,
And Casey stood a-watching it in haughty grandeur there.
Close by the sturdy batsman the ball unheeded sped —
“That ain’t my style,” said Casey. “Strike one,” the umpire said.

From the benches, bleak with people, there went up a muffled roar,
Like the beating of the storm waves on a worn and distant shore.
“Kill him! Kill the umpire!” shouted someone in the stands,
And it’s likely they’d have killed him had not Casey raised his hand.

With a smile of Christian charity great Casey’s visage shone;
He stilled the rising tumult; he bade the game go on;
(And) he signaled to the pitcher and once more the spheroid flew;
But Casey still ignored it and the umpire said, “Strike two.”

“Fraud!” cried the maddened thousands, and the echo answered fraud;
But one scornful look from Casey and the audience was awed.

They saw his face grow stern and cold, they saw his muscles strain,
And they knew that Casey wouldn’t let that ball go by again.

The sneer is gone from Casey’s lip, his teeth are clinched in hate;
He pounds with cruel violence his bat upon the plate.
And now the pitcher holds the ball and now he lets it go,
And now the air is shattered by the force of Casey’s blow.

Oh! somewhere in this favored land the sun is shining bright;
The band is playing somewhere and somewhere hearts are light,
And somewhere men are laughing and somewhere children shout;
But there is no joy in Mudville — mighty Casey has struck out.
###

also known as “Tinker to Evers to Chance”

Take Me Out to the Ball Game

Take me out to the ball game,
Take me out with the crowd.
Buy me some peanuts and cracker jack,
I don’t care if I never get back,
Let me root, root, root for the home team,
If they don’t win it’s a shame.
For it’s one, two, three strikes, you’re out,
At the old ball game.

Well, beat the drum and hold the phone – the sun came out today!
We’re born again, there’s new grass on the field.
A-roundin’ third, and headed for home, it’s a brown-eyed handsome man;
Anyone can understand the way I feel.

Well, I spent some time in the Mudville Nine, watchin’ it from the bench;
You know I took some lumps when the Mighty Casey struck out.
So Say Hey Willie, tell Ty Cobb and Joe DiMaggio;
Don’t say “it ain’t so”, you know the time is now.

Got a beat-up glove, a homemade bat, and brand-new pair of shoes;
You know I think it’s time to give this game a ride.
Just to hit the ball and touch ’em all – a moment in the sun;
(pop) It’s gone and you can tell that one goodbye!

He stands at the plate
with his heart beating fast.
The bases are loaded
the dye has been cast.

Mom and Dad cannot help him
he stands all alone.
A hit at this moment
would bring the boys home.

The ball nears the plate
he swings hard but misses.
There’s a groan from the crowd,
with some boo’s and some hisses.

A thoughtless voice cries out,
“Strike out the bum!”
Tears fill the boy’s eyes,
the game’s no longer fun.

Please open your heart
and give him a break.
For it’s moments like this,
a great man you can make.

So keep this in mind,
if you hear someone forget.
He’s just a small boy
and not a man yet.

Money everywhere they turn from morning to the night,

Only two things count at all from mountain to the sea,

Part of it’s a percentage, and the rest is a guarantee.

Game Called. Across the field of play
the dusk has come, the hour is late.
The fight is done and lost or won,
the player files out through the gate.
The tumult dies, the cheer is hushed,
the stands are bare, the park is still.
But through the night there shines the light,
home beyond the silent hill.

Game Called. Where in the golden light
the bugle rolled the reveille.
The shadows creep where night falls deep,
and taps has called the end of play.
The game is done, the score is in,
the final cheer and jeer have passed.
But in the night, beyond the fight,
the player finds his rest at last.

Game Called. Upon the field of life
the darkness gathers far and wide,
the dream is done, the score is spun
that stands forever in the guide.
Nor victory, nor yet defeat
is chalked against the players’ name.
But down the roll, the final scroll,
shows only how he played the game.

Float like a butterfly,
Sting like a bee,
Your hands can’t hit,
What your eyes can’t see. 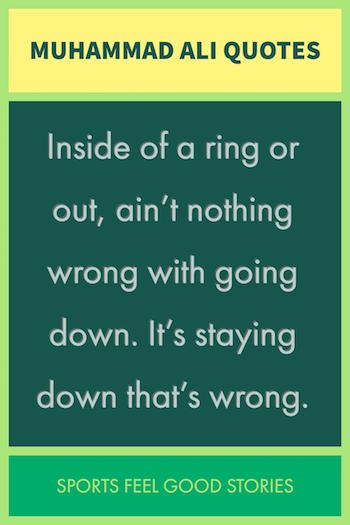 I Am The Greatest

This is the legend of Cassius Clay,
The most beautiful fighter in the world today.
He talks a great deal, and brags indeed-y,
Of a muscular punch that’s incredibly speed-y.

The fistic world was dull and weary, but with a champ like Liston,
things had to be dreary.
Then someone with color and someone with dash, brought fight fans are
runnin’ with Cash.
This brash young boxer is something to see and the heavyweight
championship is his destiny.
This kid’s got a left, this kid’s got a right, if he hit you once,
you’re asleep for the night.

Clay swings with his left, Clay swings with his right,
Look at young Cassius carry the fight.
Liston keeps backing, but there’s not enough room,
It’s a matter of time till Clay lowers the boom.
Liston is still rising, now Clay lands with a right,
What a beautiful swing, and the punch raises the Bear clean out of the ring.
Liston is still rising and the ref wears a frown,
For he can’t start counting till Sonny goes down.
Now Liston is disappearing from view,
The crowd is going frantic,
But radar stations have picked him up,
Somewhere over the Atlantic.
Who would have thought when they came to the fight?
That they’d witness the launching of a human satellite.
Yes the crowd did not dream, when they put up the money,
That they would see a total eclipse of the Sonny.

If you have any other suggestions for sports poems of note, please contact us.  Thanks.

The Third Man Factor:  Surviving the Impossible by John Geiger