Looking for some inspiring tennis quotes to get your tennis team fired up for a match? Our collection of tennis sayings will inspire, motivate and entertain.

Life is like a game of tennis; the player who serves well seldom loses.
Author Unknown

To err is human. To put the blame on someone else is doubles.
Author Unknown

You only live once, but you get to serve twice.
Author Unknown

Love is nothing in tennis, but in life it’s everything.
Author Unknown

If you don’t practice you don’t deserve to win.
Andre Agassi

Nothing can substitute for just plain hard work. I had to put in the time to get back. And it was a grind. It meant training and sweating every day. But I was completely committed to working out to prove to myself that I still could do it.
Andre Agassi 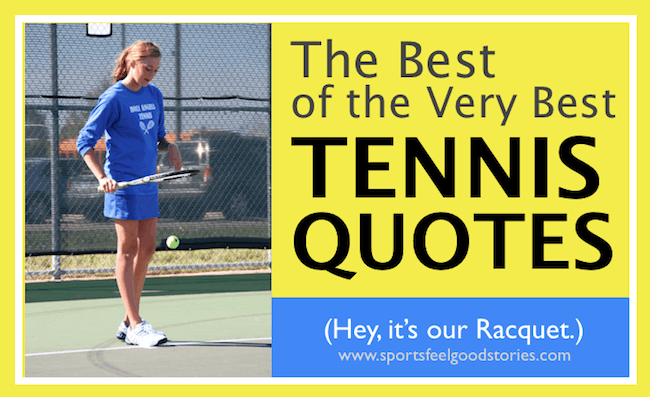 
Tennis is a tough sport – there are no draws. But if there was one, I would have been happy to accept a draw with Rafa tonight, really.
Roger Federer (upon winning the 2017 Australian Open)

I would have said a great event would be quarters…Fourth round would be nice.
Roger Federer (upon winning the 2017 Australian Open)

I hope to see you next year. If not, this was a wonderful run here, and I can’t be more happy to have won here tonight.
Roger Federer (upon winning the 2017 Australian Open)

He did not surprise me. He was playing aggressively, and I understand that in a match against me. I don’t think it would have been intelligent to try to get into too many long rallies from the baseline. I don’t think he would have won. He went for it, and it was the right thing for him to do.
Rafael Nadal

Being honest, in these kinds of matches I won a lot of times against him. Today he beat me, and I just congratulate him.
Rafael Nadal

Start where you are. Use what you have. Do what you can.

Success is a journey, not a destination. The doing is often more important than the outcome.

The ideal attitude is to be physically loose and mentally tight.

From what we get, we can make a living; what we give, however, makes a life.

What a polite game tennis is. The chief word in it seems to be “sorry” and admiration of each other’s play crosses the net as frequently as the ball.
J.M. Barrie

Everything comes at a cost. Just what are you willing to pay for it?
Serena Williams – More Serena Quotes and a look at her net worth

Tennis belongs to the individualistic past – a hero, or at most a pair of friends or lovers, against the world.
Jacques Barzun

When I was 40, my doctor advised me that a man in his 40s shouldn’t play tennis. I heeded his advice carefully and could hardly wait until I reached 50 to start again.
Hugo L. Black

But that won’t give me a free hand to hold the beer.
Billy Carter, while being taught a two-handed backhand shot

The primary conception of tennis is to get the ball over the net and at the same time to keep it within bounds of the court; failing this, within the borders of the neighborhood.
Elliot Chaze

In tennis the addict moves about a hard rectangle and seeks to ambush a fuzzy ball with a modified snow-shoe.
Elliot Chaze

I hate to lose more than I love to win.
Jimmy Connors

Experience is a great advantage. The problem is that when you get the experience, you’re too damned old to do anything about it.
Jimmy Connors

The serve was invented so that the net could play.
Bill Cosby

Tennis is not a gentle game. Psychologically, it is vicious. That people are only just beginning to come to terms with this fact illustrates just how big a con trick has been perpetrated on the non-playing tennis public – and even a few players, usually losing players – for decades.
Richard Evans

If you can react the same way to winning and losing, that’s a big accomplishment. That quality is important because it stays with you the rest of your life, and there’s going to be a life after tennis that’s a lot longer than your tennis life.
Chris Evert

I fear no one, but respect everyone.
Roger Federer

Good shot, bad luck, and hell are the five basic words to be used in a game of tennis, though these, of course, can be slightly amplified.
Virginia Graham

I think luck falls on not just the brave but also the ones who believe they belong there.
Novak Djokovic – Learn all you need to know about Novak Djokovic


The depressing thing about tennis is that no matter how good I get, I’ll never be as good as a wall.
Mitch Hedberg

Why has slamming a ball with a racquet become so obsessive a pleasure for so many of us? It seems clear to me that a primary attraction of the sport is the opportunity it gives to release aggression physically without being arrested for felonious assault.
Nat Hentoff

Tennis and golf are best played, not watched.
Roger Kahn

An otherwise happily married couple may turn a mixed doubles game into a scene from Who’s Afraid of Virginia Woolf.
Rod Laver

The next point — that’s all you must think about.
Rod Laver

Tennis is an addiction that once it has truly hooked a man will not let him go.
Russell Lynes

What is the single most important quality in a tennis champion? I would have to say desire, staying in there and winning matches when you are not playing that well.
John McEnroe

I’ll let the racket do the talking.
John McEnroe

The moment of victory is much too short to live for that and nothing else.
Martina Navratilova

Whoever said, ‘It’s not whether you win or lose that counts,’ probably lost.
Martina Navratilova

I have always considered tennis as a combat in an arena between two gladiators who have their racquets and their courage as their weapons.
Yannick Noah

It’s one-on-one out there, man. There ain’t no hiding. I can’t pass the ball.
Pete Sampras

The cunning competitor plays on the other party’s guilt. Continuously praise your opponent’s shots, and you’ll notice how he begins to press. Self-beratement also serves to balance a guilty conscience for being successful and makes your opponent disturbed for upsetting you so. If on occasion you call one of your opponent’s “out” shots “in,” then later on you can innocently call an “in” shot “out” on a crucial play. Practice saying “Good try,” sincerely; then you can call a lot of close shots “out” and get away with it.
Theodor Saretsky

Speed in tennis is a strange mixture of intuition, guesswork, footwork and hair-trigger reflexes. Many of the players famed for quickness on court would finish dead last in a field of schoolgirls in a race over any distance more than ten yards.
Eugene Scott

It’s difficult for most people to imagine the creative process in tennis. Seemingly it’s just an athletic matter of hitting the ball consistently well within the boundaries of the court. That analysis is just as specious as thinking that the difficulty in portraying King Lear on stage is learning all the lines.
Virginia Wade

Some people say I have attitude — maybe I do — but I think you have to. You have to believe in yourself when no one else does – that makes you a winner right there.
Venus Williams

Though your game is hardly the best
You can fray your opponent’s nerves
By methodically bouncing the ball
At least ten times before your serves.
Arnold J. Zarett

These tennis expressions are great for Instagram and Facebook captions. Send us your favorite tennis quotes and we may add them to our collection.  Shoot us an email with the subject heading “tennis quotes.”  Thanks.

Check out our Tennis Slogans — Great for apparel, Facebook headlines, Instagram captions, a rally cry, a banquet program and more.