Tennis court dimensions vary depending on singles or doubles play. Singles tennis uses the inner sidelines for determining an out-of-play shot and doubles tennis utilizes the full court width out to the outer, or doubles sidelines.

The International Tennis Federation (ITF) determines the official dimensions and measurements for tennis courts. Here are dimensions for a regulation, adult-size tennis court.

Single players use the narrower width for the dimensions of a tennis court for singles play (designated by the inside singles sidelines). The court length is the same for singles and doubles matches.

But, the width is different.

Doubles match rules allow players to use the full-court width, all the way to the outer doubles sidelines. The doubles court extends 4.5 feet beyond each side of the singles court sidelines. 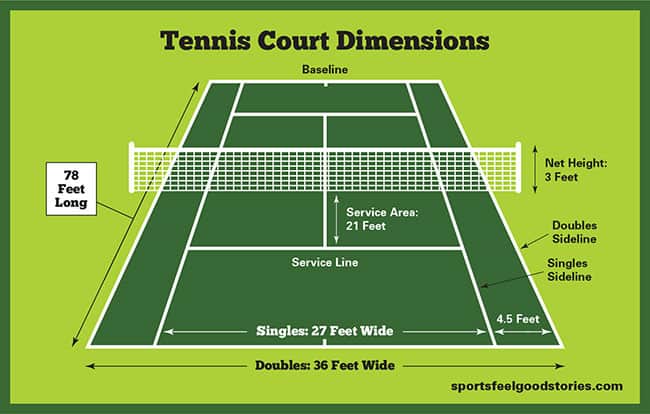 A center service line divides the service area on each side of the net into two rectangles. These areas represent the space in which the served ball must land. The size of each area is the same for both singles and doubles matches.

The tennis net stretches across the width of the court, dividing it equally. The net is attached to posts on either side of the court. The center point of the net is about 6 inches lower than its height at the posts due to its weight. The net posts are located 3 feet (.91 meters) outside the sideline for both singles and doubles matches.

Here are tennis court measurements for those looking to build their own backyard court. The area required for a home court is determined mainly by available space, but it is recommended not to build a court within a play area smaller than the minimum size. Sizes below represent the entire play area required (tennis court plus outer clear space).

Extra space is required surrounding the court sidelines and baseline to accommodate player overruns. The following is the recommended clear space that is needed around the court.

Smaller tennis courts for children: The ITF has determined that children under 10 years of age are better able to learn the game of tennis on smaller size courts, using slower orange, red and green balls.

These smaller size courts have the following dimensions:

There are a variety of surfaces used in the game of tennis. The major surfaces used in tennis include clay courts, carpet courts, grass courts, and hard courts. Hard surface courts are the predominant surface for most indoor courts.

Each surface has its own unique characteristics. A key aspect is how quickly the ball moves on the surface. Grass and hard court surfaces tend to play fast while clay plays slow.

Of the four majors – U.S. Open, French Open, Australian Open, and Wimbledon – Wimbledon is the only major played on grass courts. At the time of the championship matches, the grass is cut to the height of 8mm.

The biggest tennis-only venue in the world with a capacity of 23,771. It is named after tennis great, Arthur Ashe, who won three grand slam titles and was a leader off the court as well supporting causes like the fight against racism and poverty around the world.

Ashe was the first black man to win Wimbledon and the U.S. Championship. The stadium is part of the USTA Billie Jean King National Tennis Center based in Queens, New York.

The Billie Jean King National Tennis Center features 45 courts, but only 15 are used for the U.S. Open.

The 14,820 capacity arena in Melbourne, Victoria, Australia, is home to the Australian Open. The court surface is a blue Plexicushion. This surface plays similarly to the US Open DecoTurf.

Named after Australian tennis legend Rod Laver, who was the number one ranked player both as an amateur and as a professional between 1961 and 1970.

This arena was the first in Australia to have a retractable roof. The arena is the focal point of the National Tennis Centre at Melbourne Park, and also serves events in basketball, musical concerts, and other special events.

Seating 14,840, the stadium is named after the first man to fly over the Mediterranean Sea. Garros was a French World War I pilot who also loved the game of tennis.

This venue features clay surface courts which slows down the game a bit, as the ball bounces higher.

Originally built in March 2000, Indian Wells features 29 concrete courts with a PlexiPave surface. Stadium 1 seats 16,100 people and Stadium 2 has an 8,000 person seating capacity. It is the second-largest tennis stadium in the world. The club is now owned by Larry Ellison of Oracle fame.

What Tennis Court Surfaces are used in Grand Slam tournaments?

1.) Who was the first African American to win the US Open Tournament?
Arthur Ashe.

3.) What did the first women to participate in the Wimbledon tournament wear?
Dresses.

4.) At Wimbledon each year, how many strawberries are consumed?
24 tons.

5.) Who played in the longest tennis match?
11 hours and 5 minutes. In 2010, John Isner beat Nicolas Mahut at the Wimbledon Championships.

6.) What is the maximum tennis racquet length allowed?
29 inches long.

7.) How long have yellow balls been used at Wimbledon?
Since 1986 – originally, white tennis balls were the choice.

There, you have it. Maybe everything you want to know about tennis courts and their dimensions.

Mike, a former tennis instructor, is a writer and the founder of Sports Feel Good Stories. He still owns the racquet that he learned the game on, a Jack Kramer Autograph.