There are typically two different standards for ice hockey rink dimensions and size. The North American rink size is also the standard for the NHL. The other most common rink size is the European-size rink or International rink.

Let’s take a look at some of the important measurements and distances used in the game of hockey.

An international hockey rink is about the same length, but considerably wider than an NHL rink. Bigger ices change the style of play. It provides for a more wide-open style of play with more space and more time. The pace of play tends to be slower and the game turns to puck possession. Still, a shooter’s angles are not quite as good when forced wide.

As you can see the blue lines are 50 feet apart from each other, or 25 feet from the red line. 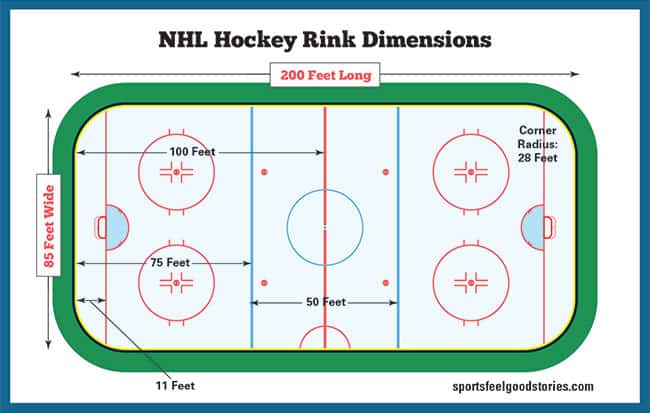 A line pass going from a player behind one blue line to a player on the far side of the other blue line would travel over 50 feet.

The sides of the rink for International Hockey are 98.4 feet apart. The length is 197 feet.

How long is a Hockey Rink?

The length of a hockey rink is 200 feet for the North American or NHL rink. The International rink is slightly shorter, at 197 feet (or 60 meters).

What is the Outdoor or Backyard Hockey Rink Size?

The outdoor rink can be any size you choose (usually determined by available space), but typically they are much smaller than the professional rink. One common size for young skaters is 46 feet long by 20 feet wide. For older kids and teens, a rink size of 88 by 44 feet is good.

> Montreal Forum – The Canadians won the NHL title 22 times in the course of playing their home games at the Montreal Forum. Some of the greats who played their include: Rocket Richard, Guy Lafleur, and Ken Dryden.

> Maple Leaf Gardens – The Toronto Maple Leafs played here for home games from 1931 to 1999. More “Hockey Night in Canada” games were broadcast from this arena than any other in the NHL.

The Boston Garden – The Bruins called this home from 1928 through 1995. While shorter than regulation size, it was a very intimate setting to watch a game. Bobby Orr and Phil Esposito played here.

How Big is a Roller Hockey Rink?

Inline skate or roller hockey rink size can vary, but usually, they are 185 feet long by 85 feet wide.

What Size is a Knee Hockey Rink?

Knee hockey’s rink measures about 20 feet long by 14 feet wide. Or, it can be played in whatever space is available in a basement. 🙂

The regulation NHL goal is 6 feet wide by 4 feet high. The net extends 40 inches from front to back. 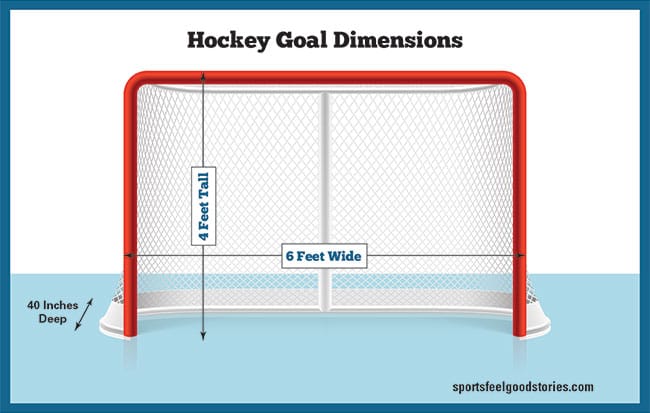 The wall or boards that encircles the rink stand between 40 and 48 inches tall.

How Big is the Hockey Goal Crease?

The crease or goal crease is the area directly in front of the nets. It’s marked by a red border with a blue interior. Two straight lines extend 4.5 feet perpendicularly from the goal line one foot outside each goal post. They’re connecting by a 6-foot radial line. The lines are 2 inches thick.

Offensive players are not permitted to enter the area unless they have possession of the puck. It’s a way to protect the goalie.

The black, vulcanized rubber disk used in hockey is typically 1 inch thick and 3 inches in diameter. The weight can vary between 5.5 and 6 ounces.

Three periods, each lasting 20 minutes, make up a professional hockey game. The total game time is 60 minutes long. Teams switch sides after each period and overtime.

When watching a hockey game, a few questions might arise beyond the strategies, tactics, and rules of the game itself. We’re here to help.

How do ice rinks work?

Typically, cold concrete is used to make ice in a multi-stage process. Metal pipes are placed inside the concrete slab under the ice. A refrigeration plant used freezing cold glycol that runs through the pipes.

This causes the concrete to drop well below the freezing mark. Thin layers of ice are added to build a smooth surface ideal for skating.

How do they apply the lines to the ice?

How thick is hockey ice?

The ice on a professional ice rink is about .75 inch thick.

What is a Zamboni?

A Zamboni is an ice resurfacing machine that you’ll see run between periods at hockey games. Named after it’s inventor Frank J. Zamboni, of Philadelphia, it’s become an icon of modern hockey. While it’s a trademarked name, the term is sometimes used generically, if incorrectly, to refer to any ice resurfacing machine.

A Zamboni washes a rink’s ice, shaves it and leaves a think layer of water to freeze over and smooth out the surface. Mesmerizing to watch, what kid at a hockey game doesn’t want to drive one of these bad boys?

Why is a hockey jersey sometimes called a “sweater”?

In the early days of the sport, players actually wore sweaters unlike the thin jersey material of today.

When was the first goalie mask used?

In 1927 Clint Benedict was the first goalie to ever use a mask to protect his face. A mask would not be used again until 1959 when Jaques Plante of the Montreal Canadiens used one after taking a shot to the head with a puck.

The game has a rich history. Did you know these fun hockey facts?

Mike is an author and editor of Sports Feel Good Stories. 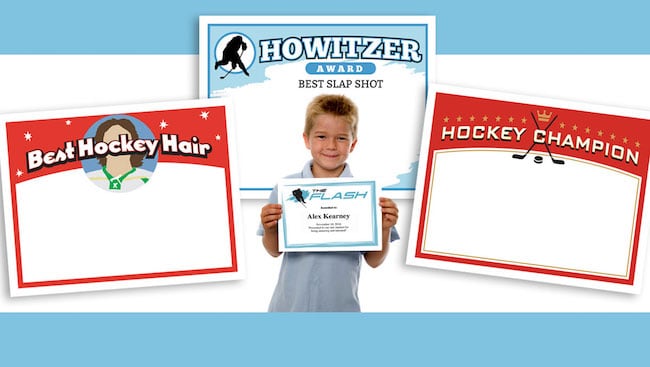