Whenever it comes to finding motivation and inspiration, Wayne Gretzky quotes will always find a place. Wayne Gretzky, well known as The Great One, is considered as the greatest hockey player ever.

Not only are his records unmatched, but there is also no one who could come close to them. He holds a 6-time All-Star record. There are a total of 61 NHL records to his name. He scored 200 total points, not just in one season but in four seasons. There is no player in the league that scored 200 total points even in a single season.

Here are some of the best Wayne Gretzky quotes and some interesting facts about the great hockey player. Share these quotes and his achievements with your friends and colleagues.

Skating alone is an art.

Ninety percent of hockey is mental and the other half is physical.

Sometimes people ask, ‘Are hockey fights real?’ I say, ‘If they weren’t, I’d get in more of them.

I get a feeling about where a teammate is going to be. A lot of times, I can turn and pass without even looking. 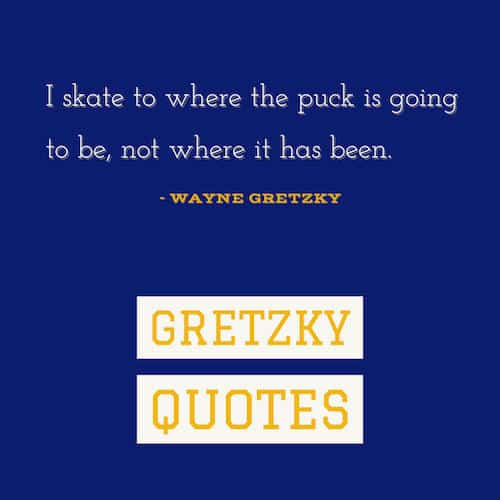 Gretzky’s most famous quote, “You miss 100% of the shots you don’t take” was also featured in the TV show, The Office. Michael Scott, the show’s leading character quoted both Gretzky and himself for the saying.

You miss 100% of the shots you don’t take. – Wayne Gretzky
— Michael Scott

2018 Minnesota All Hockey Hair Team: 7 Things You Should Know

You Miss 100% of the Shots You Don’t Take Quote

This is perhaps the most famous quote by Wayne Gretzky. It is a beautiful quote that can be applied to all aspects of life. In these words, he inspires you to take risks if you want to succeed. There is no success without taking your chances. You need to give your best shot to be able to make it big. But if you don’t try it, you will not be able to make any progress. You will often come across these words from the greatest hockey player. 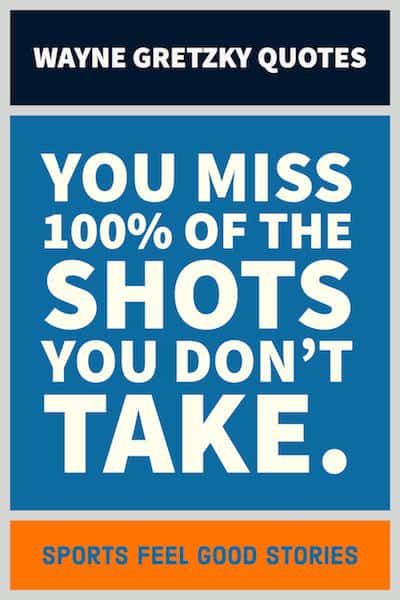 Wayne Gretzky has an estimated net worth of around $200 million. The retired Canadian professional hockey player is also a former coach and has been known for his philanthropy.

Some of the charitable organizations that have received aid from him include the Make-A-Wish Foundation, The Miami Project, Arthritis Society of Canada, Bone Marrow Foundation, Nevada Cancer Institute, and the LA Police Memorial Foundation. The legendary player also runs his own charity under the Wayne Gretzky Foundation.

Maybe it wasn’t the talent the Lord gave me-maybe it was the passion.

You know, I’ve held women and babies and jewels and money, but nothing will ever feel as good as holding that Cup.

I knew at a young age, whether I was playing baseball or hockey or lacrosse, that my teammates were counting on me, whether it be to strike the last batter out in a baseball game or score a big goal in a hockey game.

I skate to where the puck is going to be, not where it has been.

Procrastination is one of the most common and deadliest of diseases and its toll on success and happiness is heavy.

The greatest thing about playing obviously is winning, and you can’t replace that experience with anything.

Hockey is a unique sport in the sense that you need each and every guy helping each other and pulling in the same direction to be successful.

Only one thing is ever guaranteed, that is that you will definitely not achieve the goal if you don’t take the shot.

Listen, everything I have in my life is because of the NHL and because of hockey, and I love the game and I loved every minute of being a player, I loved coaching, I loved being involved in the NHL.

I grew up such a fan. It was my life. Everything I did was hockey related and everything I have is because of hockey and the NHL.

The highest compliment that you can pay me is to say that I work hard every day, that I never dog it.

He brings something special. I don’t know what it is, but if you ask him, you couldn’t understand his answer. (Describing a teammate.)

I can’t remember the last time I went to a game and there was a fight. I think they fight more in baseball now than they do in hockey.

When you win, say nothing, when you lose say less.

You know, I’ve held women and babies and jewels and money, but nothing will ever feel as good as holding that Cup

The only way a kid is going to practice is if it’s total fun for him… and it was for me.

It’s kind of ironic – when I broke in at 17, I was told I was too small, too slow and I wouldn’t make the NHL.

Growing up, I was always the small guy.

No matter who you are, we’re creatures of habit. The better your habits are, the better they will be in pressure situations.

If you have any suggestions for Wayne Gretzky’s quotes, please let us know via the contact page. Thanks.

The only way you can stop Gretzky is to hit him when he is standing still during the national anthem.
Jimmy Cannon

Gretzky has earned the nickname, “The Great One” in the sport because he is referred to as the greatest hockey player ever by the league, players and media fraternity. All of Gretzky’s records easily show that he deserves that title.

He has the highest number of goals and assists in the sport in NHL history. Number 99 is the only player in the league to have more than 200 points in a single season. And he holds this record for four seasons.

He has more assists than the total points that any player has scored. He had 11 100 or more assist seasons. That’s crazy! He’s the only player to reach 2,000 career points and the only to reach 3,000 points when you add in playoffs. When he retired, he had 61 league records, 6 All-Star records, 15 playoff records, and 40 regular-season records. He had 50 career hat tricks – 50! He once scored 50 goals in the first 39 games of a season. Gretzky had 19 seasons where he averaged at least one point per game. He won nine MVP trophies. There is no other player that could come close to him, truly making him “The Great One.”