Every hockey player, every hockey fan recognizes the ice resurfacing machine. We watch, mesmerized, as it takes its slow, zen-like trips around the rink. It shaves off a thin layer of ice and replacing it with a film of hot water that mends and transforms the chaotic wreckage of hockey skates into a fresh new slate that players use to write the next chapter of their story.

If you grew up playing hockey, chances are good that you didn’t just take a passing interest in the Zamboni. You wanted a chance to drive that baby. Oh, and you also wanted to play in the NHL too, of course, picturing yourself a star player who takes the team on your back and notches a win. But those two thoughts didn’t usually enter your mind at the same time. 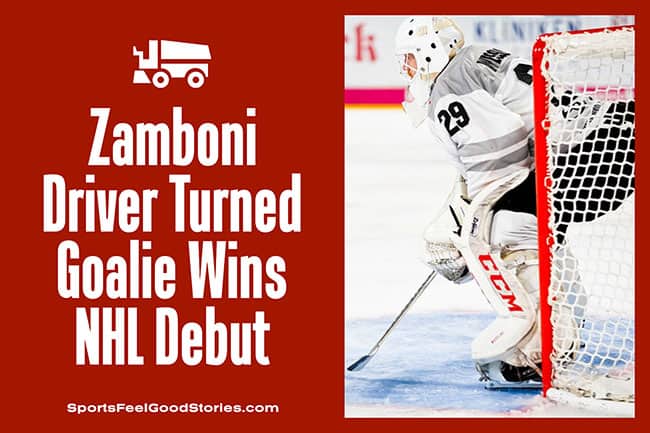 Zamboni Driver Gets The Call to Play Goalie

Saturday, Feb 22, the separate worlds of Zamboni Driver and NHL Player crossed – in the form of a 42-year-old man by the name of David Ayres, former Junior B level player, current Zamboni driver. David Ayres could be found making ice in Toronto’s Mattamy Athletic Centre, home of the minor league Marlies, a few blocks from the Maple Leafs’ Scotiabank Arena.

He also doubled as a human target, taking shots from Marlies and Leafs players as they warmed up for practices during the week. David Ayres was a man otherwise unknown to the hockey world. Boy, do we know him now.

That fateful Saturday, as the Leafs hosted the Carolina Hurricanes, the ‘Canes starting goalie James Reimer left the game in the first period with a lower-body injury. Bad news for him and the team, but Reimer was replaced by a capable Petr Mrazek. Then in the second period, the stuff of hockey coaches’ nightmares unfolded: Mrazek took the brunt of a brutal collision with the Leafs’ Kyle Clifford. The blow knocked Mrazek’s helmet off his head, and he now lay sprawled on the ice. He would later be said to have a concussion.

With Mrazek helped off the ice the Hurricanes were now in a bind. They did not have a third goalie along on the road trip. The Hurricanes didn’t even have a third goalie on their roster. They had nobody to stand in goal. But the NHL has a provision for this situation: the rink employs an “emergency backup goalie” to be available to stand in goal, should either team run out of players.

The emergency goalie can usually be found somewhere in the stands, just watching and enjoying the game. And that’s exactly what David Ayres was doing with his wife – that is until he saw Reimer go down. Ayres dutifully trudged down to the Visitors’ locker room with his gear, dressed in his blue and white breezers, strapped on his blue and white pads, and pulled a red ‘Canes jersey number 90 jersey over his head, just in case lightning struck again. It would.

Mrazek left the game with a few minutes left in the second period. Ayres, who had survived kidney cancer 15 years prior, not knowing then if he would ever play hockey again at any level, now walked the tunnel and stepped out on the ice, an NHL player. A cheer went up from the crowd of knowledgeable Leaf fans. Carolina players patted Ayres on the back as he hunched down in goal, and shot pucks at him to warm him up. Then it was game on.

Carolina was already in the lead 3-1 when Ayres took the ice and got first touches. The Canes knew they had to give him even more of a buffer, and scored the next goal to go up 4-1. A good thing, too: on their next possession the Leafs would use Ayres’ teammates to screen him and slip a shot along the ice to bring the score to 4-2. A minute or so later the Leafs would score on Ayres again. Two shots, two scores, no saves, 4-3.

The Canes defense would keep the Leafs away from Ayres for the next few minutes, and Ayres came up with a big save to help close out the period. In the locker room players encouraged Ayres, with Erik Haula telling him to just have fun, “we don’t care if you let 10 goals in”, Ayers would tell USA today. “That settled me right down”, Ayres said.

When Ayres came out in the third-period players from both teams tapped him on his pads for encouragement. Ayres was now solid as a rock. The Leafs tested him over and over. But, Ayres would not yield a goal, stopping seven of seven shots, even as Carolina added goals of their own. With each save the stadium – filled to capacity with Leafs fans – erupted with cheers. His final save came with 3 seconds left in the game, sealing a 6-3 victory.

A memory we’ll all have forever pic.twitter.com/LUxqs8o3Wr

David Ayres, Zamboni driver, cheered by both teams and the entire hockey world, would, at age 42 become the oldest NHL goalie to win their career start.

Stan is a sports fan who makes The State of Hockey (Minnesota) his home, though cheese runs through his veins. He counts himself a fervent supporter of the Packers and Badgers. He is also a fan of speed chess, golf, and the board game, “Go.”

Dimensions and Diagram for Hockey Rink