Serena’s dominance in women’s tennis stretches over two decades and includes 23 Grand Slam titles. Over the course of her successful tennis career, Williams’ prize-money earnings total $89 million—more than double any other female athlete.

Let’s first take a look at Serena’s net worth, then move on to 35 quotes, and then fun facts on this star tennis player and sports icon.

(Estimate based on a variety of Internet sources.) 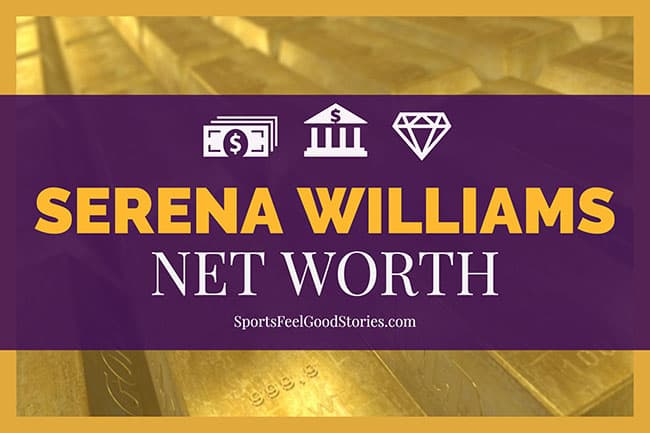 The 23-time Grand Slam champ earned $29.2 million last year in 2018. Tournament winnings amounted to $4.2 million and endorsement deals made up the majority of the earnings at $25 million.

Check out The Battle of the Sexes: Billie Jean King vs. Bobby Riggs Story

Early in her career, the tennis star wore Puma sportswear on the court. She is currently endorsed by Nike and her racket manufacturer is Wilson Sporting Goods.

Fashion has always been an important part of Serena Williams’s identity on and off the court. In 2018 she launched her own clothing line, S by Serena. The company sells directly to the consumer and was self-funded.

Williams also has financial interests in other sporting arenas; she has a small stake in the Miami Dolphins (along with her sister Venus Williams) and in the UFC. Serena Williams net worth is diverse and strong.

In 2018, Williams earned $29.2 million according to forbes.com. The overwhelming majority of the income came from endorsements; actual tournament prize money made up only $4.2 million of the total.

Plays: Right-Handed, with a two-handed backhand.

Nicknames: ReRe, The Beast of Burden, Serena Stoutarm, Momma Smash, The Widowmaker, Meka, and The King of WTA.

Serena Williams is one of the best women tennis players in the world. Her reign of dominance on the tennis court is impressive. During a 15-year period, she ranked as the No. 1 singles tennis player on eight separate occasions by the WTA (Women’s Tennis Association).

Among active players, she holds the most Grand Slam titles combined. Her 23 Grand Slam singles titles are the high-water mark in the Open Era (since 1968).

Who is Serena Williams’ husband?

Serena Williams is married to Reddit co-founder Alexis Ohanian. They have a daughter named Alexis Olympia.

Who are Serena Williams’ Mother and Father?

Serena’s parents are Oracene Price and Richard Williams. Both parents acted as her official coaches early in her career.

Never have two sisters played such a dominating role in tennis. Serena’s older sister is the famous tennis player Venus Williams. The two sisters also have three maternal half-sisters – Yetunde, Lyndrea and Isha – and seven half-siblings from their father’s side.

1.) …There is one day, I am going to wake up and I am going to say, “I’m done.” I know that when that will be but I will know the feeling and I don’t have that feeling yet. (And) I didn’t have it in the last year, with everything that happened, so when it comes, I’ll know.

2.) Everything comes at a cost. But, the question is just what are you willing to pay for it?

4.) We all know who the real number one is. Quite frankly, I’m the best in the world.

5.) I really think a champion is not defined by their wins, but by how they can recover when they fall.

6.) The success of every woman should be the inspiration to another. We should raise each other up. Make sure you’re very courageous: be strong, be extremely kind, and above all be humble.

8.) Victory is very, very sweet. It tastes better than any dessert you’ve ever had.

9.) When you’re playing the best player in the world, you’ve got to play well.

10.) I’m an athlete and I’m black, and a lot of black athletes go broke. I do not want to become a statistic, so maybe I overcompensate. But I’m paranoid. Oprah told me a long time ago, ‘You sign every check. Never let anyone sign any checks.

12.) When I’m down, I talk to myself a lot. I look crazy because I’m constantly having an argument with myself.

14.) What’s going to make me happy is going on the court and holding up trophies, singles, and doubles.

15.) You can be whatever size you are, and you can be beautiful both inside and out. We’re always told what’s beautiful and what’s not, and that’s not right.

17.) There’s one thing I’m really good at, and that’s hitting the ball over a net, in a box. I’m excellent.

18.) Venus told me the other day that champions don’t get nervous in tight situations. That really helped me a lot. I decided I shouldn’t get nervous and just do the best I can.

19.) Growing up I wasn’t the richest, but I had a rich family in spirit. Standing here with 19 championships is something I never thought would happen. I went on a court just with a ball and a racket and with hope.

20.) Family’s first, and that’s what matters most. We realize that our love goes deeper than the tennis game.

22.) Luck has nothing to do with it because I have spent many, many hours, countless hours, on the court working for my one moment in time, not knowing when it would come.

23.) I can’t become satisfied, because if I get satisfied, I’ll be like, “Oh, I’ve won Wimbledon and I’ve won the U.S. Open. Now can I relax.” But now people are really going to be fighting to beat me.

24.) I am lucky that whatever fear I have inside me, my desire to win is always stronger.

25.) Luck has nothing to do with it. I have spent many hours—countless hours, on the court working for my one moment in time.

On Winning and Losing

26.) I don’t like to lose—at anything… Yet I’ve grown most not from victories, but setbacks. If winning is God’s reward, then losing is how he teaches us.

27.) I love who I am, and I encourage other people to love and embrace who they are. But it definitely wasn’t easy—it took me a while.

28.) I definitely have found a balance. I’ve had so many offers in the past to do different movies or different things and I always choose tournaments over it.

29.) To this day, I don’t love my arms. People want more fit arms, but my arms are too fit. But I’m not complaining. They pay my bills.

30.) If you can keep playing tennis when somebody is shooting a gun down the street, that’s concentration.

31.) I always believe I can beat the best, achieve the best. I always see myself in the top position.

32.) With a defeat, when you lose, you get up, you make it better, you try again. That’s what I do in life, when I get down, when I get sick, I don’t want to just stop. I keep going and I try to do more. Everyone always says never give up but you really have to take that to heart and really do never definitely give up. Keep trying.

33.) I’m not used to crying. It’s a little difficult. All my life I’ve had to fight. It’s just another fight I’m going to have to learn how to win, that’s all. I’m just going to have to keep smiling.

34.) I’m a perfectionist. I’m pretty much insatiable. I feel there are so many things I can improve on.

B.) Her career highlights include 31 Grand Slam singles tournament appearances. Her 23 titles are second-most all-time (Australian Margaret Court holds the record at 24).

C.) Serena began playing tennis at the age of four.

D.) Williams enjoys listening to David Bowie’s song Fame during workouts and follows up with a Gatorade energy bar.

What’s Next for Serena?

This has been a look at Serena Williams’s net worth, her endorsement deals and future earnings potential.

Even after her tennis career is over, Serena will undoubtedly continue to draw endorsement deals and appearances, as well as grow her business portfolio. Her net worth will likely multiply with each passing year.

Greg writes about football, tennis, and sports. Mike, a former tennis instructor, is the editor and founder of Sports Feel Good Stories.