Troy Aikman net worth, quotes, bio, and more are covered on this one-stop page.

You’ll get a quick look at all you need to know about former Dallas Cowboy quarterback and Fox Sports broadcaster Troy Aikman. Learn about his NFL career stats, his wife and family, his business interests.

Career: Troy Aikman is a former professional football player/starting quarterback for the Dallas Cowboys (from 1991 to 1999). He is currently a sportscaster and commentator for NFL games on Fox Television Network’s Thursday Night Football with play-by-play announcer Joe Buck and sideline reporter Erin Andrews. In 2004 he received an Emmy Award nomination for his television work with the NFL.

His broadcasting career began in 2001 and includes coverage of five Super Bowls.

College: Aikman played for The University of Oklahoma football team in 1984 and 1985. The next year, he transferred to UCLA. NCAA rules required him to sit out the 1986 season. He completed his college football eligibility with UCLA in 1987 and 1988.

NFL draft: Aikman was the first overall pick by the Dallas Cowboys in the 1989 NFL Draft. It was the very first pick Dallas owner Jerry Jones ever made for the Cowboys. 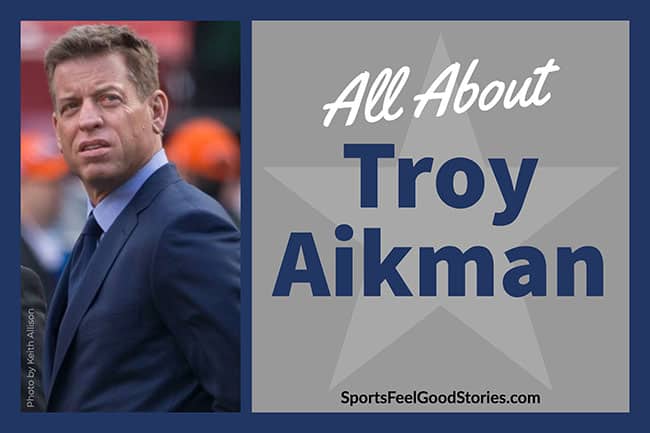 Troy Aikman’s net worth is estimated to be $40 million. It’s estimated his current salary as a broadcaster is $1 million annually.

.> He had 20 career game-winning drives

.> Led the Cowboys to 16 playoff games

.> Inducted into the College Football Hall of Fame in 2008

In his three Super Bowl appearances, Aikman threw five touchdowns and only one interception. His overall Super Bowl QBR is 111.9.

When did Troy Aikman retire?

Aikman retired from playing for the Cowboys after the 1999 season. Back issues and concussion concerns signaled the end of his football career.

He finished his Dallas Cowboys career with 32,942 passing yards and 165 touchdowns over 12 seasons.

The Troy Aikman Foundation was established to provide financial support for the physical, psychological, social, and educational benefit of children. The Foundation eventually became part of the United Way of Metropolitan Dallas.

Aikman is a spokesman for Rent-a-Center along with wrestler Hulk Hogan.

Troy Aikman remained single throughout his NFL career. Texas Monthly magazine once named him the most eligible bachelor in Dallas.

Who is Troy Aikman’s wife?

The couple lived in Highland Park, TX until they separated and divorced in 2011.

In June of 2017, Aikman announced his engagement to Catherine (Capa) Mooty, a high-end fashion retailer. Mooty and Aikman were wed on September 1, 2017, in Montecito, California.

Does Troy Aikman have kids?

Aikman and his first wife have three daughters, Jordan and Alexa, along with Rhonda’s daughter from a previous marriage.

1.) Aikman grew up in Cerritos, CA before moving with his family to Henryetta, OK at the age of 12 years old.

2.) He won the 1983 Oklahoma high school state championship in typing.

5.) He was inducted into the Dallas Cowboys Ring of Honor in 2005 along with fellow teammates Emmitt Smith and Michael Irvin.

Find out the latest Troy Aikman news and announcements on all his socials.

I’ve always viewed myself as an achiever. I need to achieve for myself.

Losing doesn’t eat at me the way it used to. I just get ready for the next play, the next game, the next season.

I always play every game in my mind before it begins. A lot of times in a game, a play will happen, and it will feel like deja vu like I’ve seen the play happen before in my mind.

We go in with eyes wide open and recognize there will be a lot of hard work involved. But we anticipate having success. We feel like we have assembled a great group of people. If we were going to do it any other way, we would have made an announcement a long time ago. We were very diligent.

As a quarterback, your job is to move the football and win games, to be a leader on the field.

I’ve said for many, many years, as long as I can ever remember, when I’m asked, ‘Hey, what do you look for first in a quarterback?’ The first thing I look for is accuracy because the rest of it doesn’t matter.

I know how difficult my rookie year in the NFL was and I know how competitive this sport is.

No excuse for those mechanical errors to be happening.

I think the game has changed, … But I think you have to get great play at quarterback. I don’t believe in what some say are game-managers.

The one thing about being an athlete, say you are struggling with throwing a comeback route, well, then you go out and practice it. You throw it 100 times a day, and you get better at it, and you see those improvements pretty rapidly.

There was one time: a game, I’m not going to say who the lineman is, but I started to call a pass play (in the huddle) and this guy got really upset that it was a pass play and kind of barked out that we needed to run the ball. I was quick to let him know he hadn’t blocked anyone all day so he had no place and I didn’t want to hear that again.

I wish there was a switch that I could flip, where no one knows me. And then, when I’m ready to make a splash, I’d flip the switch and say, ‘Hey, I’m ready now.’ Unfortunately, that doesn’t happen.

I think having won a Super Bowl puts you on a different level. I know, for me, it’s extremely important to win this ballgame.

Most people assume you change with success.

Troy Aikman on his legacy

To go into the Hall of Fame, it continues the legacy of the Dallas Cowboys.

The year we went to our first Super Bowl in 1992, we were the youngest team in football. We played in the Super Bowl against a team that had a wealth of playoff experience and Super Bowl experience, and we dominated that football game.

For that one, just knowing what we went through as a team, what we overcame. It was extremely meaningful to say, ‘Wow, three world championships in four years.’ But I can honestly say that when that game ended I was thrilled beyond belief that the season was finally over. Cause it was a tough season in ’95 for me and probably for most of our football team.

12 of the best years of my life – It will never be forgotten.

I think there’s a tendency ­­– we all do, all those former players that played under Jimmy, we look back and say, ‘Wow. What would it have been like if Jimmy had stayed around?’

I find myself, it seems like every time around this type of year when the Patriots are playing in another AFC Championship game thinking, ‘Man I wish Jimmy didn’t have any other interests other than football back when he was coaching, didn’t want to fish and get out on a boat and go out to the Keys,’ because he was essential, at that time, he was Bill Belichick. But unfortunately for us and other Cowboys fans, he’s got other interests.

On injuries in the NFL

I consider myself to be one of the really, really fortunate ones to have gotten out of the game as healthy as I did.

I would bet you that even though people think I absorbed an inordinate number of head injuries, I’d say relative to the number of guys who have played this game, I would say that my head injuries were relatively small.

As long as we’re having contact and as long as there are collisions, there’s going to be head injuries. What the long-term consequences are of that, we’re beginning to learn, and that definitely will have an impact on the game as we know it.

I’m not an open person. Something’s really got to be troubling me to have heart-to-heart talks with anybody.

I always have been comfortable with my opinions and how I feel about the play on the field, and how it should be done and how teams should go about playing the game.

If head coaches weren’t important to the success of a team, then owners wouldn’t fire them all the time.

A lot of coaches and players get so tunnel-visioned that when they do have some time off, they spend it concentrating on the game.

If you do anything with the Cowboys, there’s an interest in it. And there are people who constantly want to write books about our teams in the ’90s. They want to interview me. I say, ‘Look, I’ve done it a million times. I’m just not interested. What’s left to tell?

The problem, according to Aikman, is that reviewing plays for potential pass interference penalties is a slippery slope and he questions whether the new rule is ultimately good for the game.

“… I think this rule is only going to last for this season. I don’t think it’s going to continue but then there are others that you say, ‘well if they can review this, why can’t they review this?’ And we’re going down this slippery slope where people are going to think everything should be reviewed,” he told The Dallas Morning News.

What’s next for Troy Aikman?

Be sure to tune in to Super Bowl LIV from Miami, FL on Fox to see Aikman, Joe Buck broadcast the big game on February 2, 2020. Joining the broadcast crew will be rules-analyst Mike Pereira and Erin Andrews and Kristina Pink reporting from the sidelines.

Greg is a writer and designer who resides in Minneapolis.