Choose one of these fun Baker Mayfield fantasy football names next season. The Browns are one of the NFL’s up and coming teams. As their quarterback of the future, Mayfield occupies the leadership position on the team.

His career is off to a great start in the third game of the 2018 season; he became the first player in NFL history to come off the bench, throw for over 200 yards and win the game since Fran Tarkenton did it in 1961.

Baker Me a Cake. 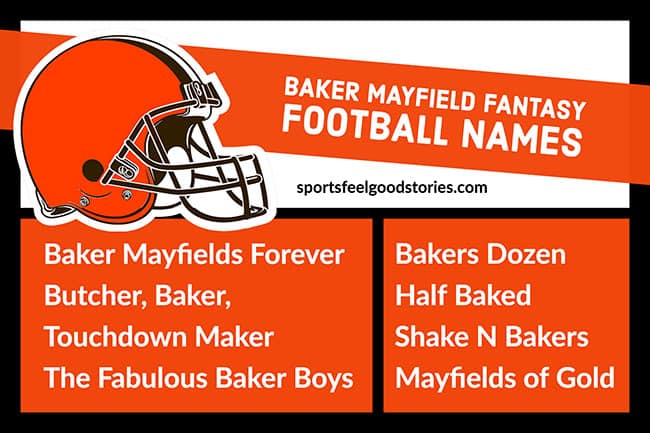 Baker Mayfield was selected by the Cleveland Browns with the first overall pick of the 2018 NFL Draft.

At the time of his transfer from Texas Tech to Oklahoma, Big 12 Conference rules required the loss of one year of eligibility for intraconference transfers. The Big 12 voted to amend the rule in June of 2016 for non-scholarship, walk-on players. The rule became known as the “Baker Mayfield rule.” The rule change cleared the way for Mayfield to play through the 2017 season.

His father James Baker played football at the University of Houston. Baker says he is the biggest influence in his life.

Mayfield enjoys playing Xbox and would like to be a professional gamer if he wasn’t in the NFL.

Having a Mayfield Day.

Baker attended Lake Travis High School in Travis County, Texas. He led his football team to a 25-2 record over two seasons as starting quarterback. The team won the District 15-5A Championship in his senior year. He was named MVP for the district and All-Centex third team.

Baker began his collegiate career at Texas Tech as the first true freshman to walk-on and start at the quarterback position in BCS history. He transferred to Oklahoma, becoming the starting quarterback there after sitting out a year. Recognition of his outstanding collegiate career included the Heisman Trophy, the Walter Camp Award, the Maxwell Award and All-America recognition.

You Baker, You Bought Her.