You are here: Home / Coaching Quotes and Sayings

These Coaching Quotes can inspire you to achieve greatness. A coach can make or break a team. Most often, the fortunes of a team depending on the whims of one man – the coach. There have been many great coaches who have played the most important role in steering their teams to make history. It is not always that star player who is the most valuable asset. Coaches can get even the worst of players to become stars.

Here are some inspiring Coaching Quotes to inspire you as a player or in your day-to-day living to excel and succeed in your calling. Every great coach has something to teach to the world. Let’s hope you will find the perfect motivation.

A coach is someone who can give correction without causing resentment.
John Wooden

Selecting the right person for the right job is the largest part of coaching.
Phil Crosby 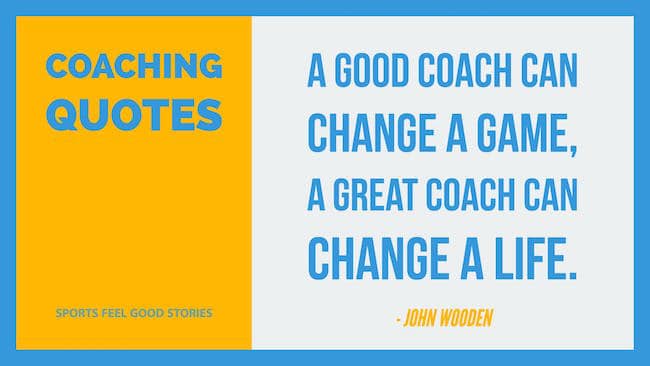 Coaching is an action, not a title and actions result in successes.
Byron & Catherine Pulsifer

The interesting thing about coaching is that you have to trouble the comfortable, and comfort the troubled.
Ric Charlesworth

To be as good as it can be, a team has to buy into what you as the coach are doing. They have to feel you’re a part of them and they’re a part of you.
Bobby Knight

Coaching is 90% attitude and 10% technique.
Unknown 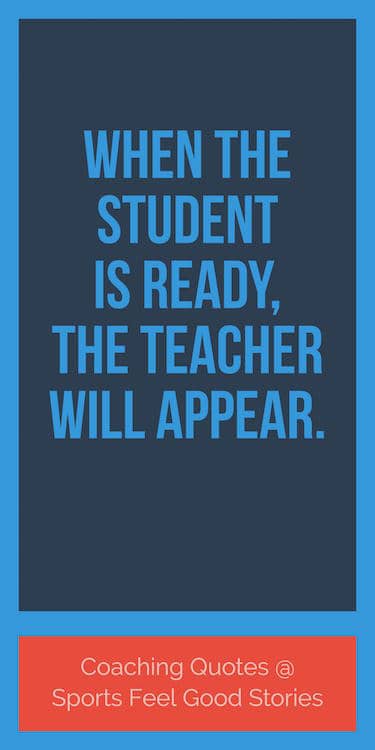 Coaches are aware of how to ignite passion and motivate people. They have an energy that is contagious and knows exactly how to get their team excited.
Brian Cagneey

You must be personally reliable before you can coach your team to generate reliable results.
Lee Colan

A good coach will make his players see what they can be rather than what they are.
Ara Parasheghian

Successful coaches are visionaries. They have a picture of success set in their minds.
Gavin McGinnis

As their coach, your job is to set the bar high, inspire them to reach this bar, encourage them, and most of all, guide them in the best possible manner and in the most supportive environment.
John Popovich

The fewer rules a coach has,
the few there are for a player to break.
John Madden

A coach should never be afraid to ask questions of anyone he could learn from.
Bobby Knight

Coaching is nothing more than eliminating mistakes before you get fired.
Lou Holtz

You need to be more like a dog, we don’t need a bunch of cats in here – meow, looking in the mirror.
David Bennett

Son, you’ve got a good engine, but your hands aren’t on the steering wheel.
Bobby Bowden

My entire adult life, I’ve never used the expression game face. I have no idea what that means or what you’re supposed to do.
Bobby Knight

I make my practices real hard because if a player is a quitter, I want him to quit in practice, not in a game.
Bear Bryant

If lessons are learned in defeat, our team is getting a great education.
Murray Warmath

Check out 7 Ways to Build Confidence in Young Athletes.

I don’t believe in team motivation.
I believe in getting a team prepared so it knows
it will have the necessary confidence when it steps on a field
and be prepared to play a good game.
Tom Landry

Some people want it to happen, some wish it would happen, others make it happen.
Michael Jordan

If someone met me on a game day, he wouldn’t like me. The days in between, I’m the goodest guy you can find.
Roger Clemens

It isn’t hard to be good from time to time in sports. What is tough, is being good every day.
Willie Mays

While I was coaching, I believe the motivation talk I gave my players that achieved the best results was in reference to their present game-day effort. Yesterday’s performance was already in history.
Bill Sharman

You don’t show up on game day and expect to be great. Greatness happens in practice. You have to expect things of yourself before you can do them.
Michael Jordan

Finding good players is easy. Getting them to play as a team is another story.
Casey Stengel

There are three types of baseball players: Those who make it happen, those who watch it happen and those who wonder what happens.
Tommy Lasorda

I have never believed in comparisons, whether they are about different eras, players or coaches.
Sachin Tendulkar

I am constantly being asked about individuals. The only way to win is as a team. Football is not about one or two or three-star players.
Pele

The winning of a pawn among good players of even-strength often means the winning of the game.
Jose Raul Capablanca

Make sure that team members know they are working with you, not for you.
John Wooden

My advice to defensive players: Take the shortest route to the ball and arrive in bad humor.
Bowden Wyatt

Coaching is a profession of love.
You can’t coach people unless you love them.
Eddie Robinson

Good coaching is good teaching and nothing else.
Pat Conroy

Leadership, like coaching, is fighting for the hearts and souls of men and getting them to believe in you.
Eddie Robinson

Everything in coaching hinges on listening because what we are listening for affects where we are speaking from.
Marilyn Atkinson

Good coaching may be defined as the development of character, personality, and habits of players, plus the teaching of fundamentals and team play.
Claire Bee

Each person holds so much power within themselves that needs to be let out. Sometimes they just need a little nudge, a little direction, a little support, a little coaching, and the greatest things can happen.
Pete Carroll

The power of coaching is this – you are expected to give people the path to find answers, not the answers.
Tom Mahalo

All coaching is, is taking a player where he can’t take himself.
Bill McCartney

Mike is a coach, author, and founder of Sports Feel Good Stories.

If you have suggested additions for coaching quotes, please let us know via the Contact page. Thanks!

You’re on Coaching Quotes and Sayings,