You are here: Home / Comeback Quotes For Sports

Great comeback quotes can help inspire you to turn your setbacks into comebacks.

Dealing with adversity is one of the most difficult and endearing lessons in sports. Use these quotes to inspire and motivate players coming back from injury or setbacks in their pursuit of excellence.

While everyone loves a good comeback story, what most folks don’t see is all the training and works that goes into one. Hopefully, these carefully selected words will serve as inspiration and motivation.

1.) Turn every setback into a comeback.
Kobe Bryant

2.) It’s hard to beat a person who never gives up.
Babe Ruth

3.) You’re never a loser until you quit trying.
Mike Ditka

4.) You have to believe in yourself when no one else does.
Serena Williams

5.) I’m coming back. Write it down in big letters. I’m not going out like this.
Mariano Rivera

6.) Never, ever give up.
Jimmy Valvano

7.) The mark of a great champion is the one who can get up off the mat and win.
Bill Belichick

8.) A champion is defined by the adversity he overcomes.
Anderson Silva

9.) No athlete is truly tested until they’ve stared an injury in the face and came out on the other side stronger than ever.
Unknown

10.) The real glory is being knocked to your knees and then coming back. That’s real glory. That’s the essence of it.
Vince Lombardi 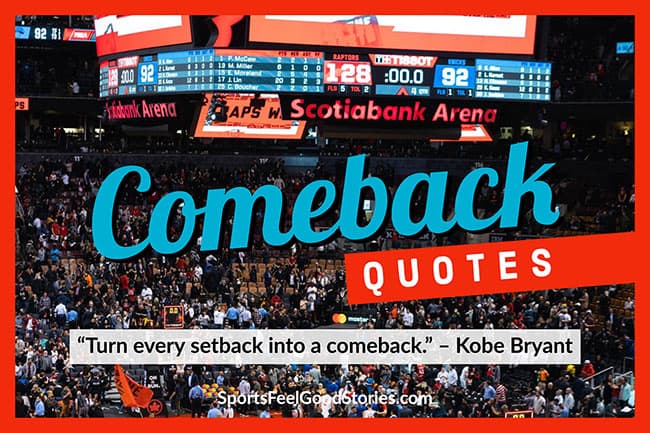 12.) My body could stand the crutches but my mind couldn’t stand the sideline.
Michael Jordan, on his retirement

14.) Going in, you want to play a perfect season and play throughout the whole entire season, but injuries are a part of basketball.
Kyrie Irving

15.) I’ve dealt with adversity before, had injuries before. I didn’t let that slow me down. It just changed my attitude about the game.
Deshaun Watson

16.) Injuries are a part of the game. Every athlete knows that.
Damian Lillard

17.) I think that’s one of the things I’ve learned through my injuries is that I need to play smarter.
Taysom Hill

19.) Every team deals with obstacles throughout the course of the season, and it’s as a unit that they need to be worked through. Injuries are part of the game, just like facing tough teams on the road or having one of your best players get into foul trouble.
Scottie Pippen

Check out Best Quotes for Athletes

20.) Injuries can never be used as excuses.
Victor Valdes

21.) Injury taught me I need to learn how to face challenges.
Shawn Johnson

22.) Injury, in general, teaches you to appreciate every moment. I’ve had my share of injuries throughout my career. It’s humbling. It gives you perspective. No matter how many times I’ve been hurt, I’ve learned from that injury and come back even more humble.
Troy Polamalu

24.) I had to develop the mentality and stay positive about making my comeback.
Alonzo Mourning

25.) I don’t know if God is a sports fan or not, but I do know this: He loves a good comeback.
Lane Kiffin

26.) A comeback in gymnastics is almost impossible in itself.
Shawn Johnson

27.) To persevere is important to everybody. Don’t give up. Don’t Give in. There is always an answer to everything.
Louis Zamperini

29.) Back before I injured my hip, I thought going to the gym was for wimps.
Bo Jackson

30.) I get Tweets every day from people telling me that Hey, I’m going to overcome my injury or my illness. Cancer. Different diseases. I can beat it because Adrian Peterson showed me the determination and the willpower to be able to prosper and get through adversity whenever it comes.
Adrian Peterson

42.) I have overcome many difficult moments in my career.
Kaka

43.) My family and I had to overcome a lot to get where we are today.
Gabby Douglas

44.) Pain doesn’t tell you when you ought to stop. Pain is the little voice in your head that tries to hold you back because it knows if you continue you will change.
Kobe Bryant

46.) The real glory is being knocked to your knees and then coming back. That’s real glory, that’s the essence of it.
Vince Lombardi

47.) Obstacles don’t have to stop you. If you run into a wall, don’t turn around and give up.
Michael Jordan

48.) Be patient. Everything is coming together.
Unknown

49.) Sports do not build character, they reveal it.
John Wooden

50.) We were going to have to experiment, and we needed to develop our younger players. And a lot of the changes were because of injuries. But that’s where I give a lot of credit to the group in terms of being able to maintain things.
Isaiah Thomas

53.) Don’t let an injury be the determining factor of who you are. Instead, try to use it as a learning experience.
Mota

54.) Now, I don’t take anything for granted.
Derrick Rose

55.) There is no ghost so difficult to lay as the ghost of an injury.
Alexander Smith

56.) Love is playing every game as if it’s your last.
Michael Jordan

59.) Life is not an accident.
Jay Williams, after his leg injury

60.) What makes something special is not just what you have to gain but what you feel you there is to lose.
Andre Agassi

61.) It was the greatest comeback I’ve ever seen.
Michael Jordan, on Tiger Woods Masters victory

62.) If it doesn’t challenge you, it won’t change you.
Fred DeVito

63.) You hear about how many fourth-quarter comebacks that a guy has and I think that means a guy screwed up in the first three quarters.
Peyton Manning

64.) It’s not about the setback, it’s about the comeback.
Robyn Benincasa

66.) By making a comeback, I’m changing the attitude of people toward me. If I’d known that people would react so enthusiastically, I’d have done it years ago.
Mark Spitz

67.) That was a great comeback, probably one of the best that I’ve ever been involved in.
Amani Toomer

68.) I’m never going to be content with a comeback when we lose.
Charlie Weis

69.) This is our comeback year.
Mark Purnell

71.) There’s no talent here. This is hard work, this is an obsession.
Connor McGregor

72.) The mental game is more about subtraction than addition.
Rob Bell

73.) It was never easy. It’s not supposed to be easy.
Tiger Woods, on his comeback

74.) Success is not an accident, it is a choice.
Steph Curry

75.) If you don’t fall, how are you going to know what getting up is like?
Steph Curry

77.) You have to fight to reach your dream. You have to sacrifice and work for it.
Lionel Messi

78.) You either have a victory or an excuse. You can’t have both.
Tiger Woods

79.) Keep working when nobody is watching.
Alex Morgan

81.) A setback is a setup for a comeback.
Eric Thomas

82.) It’s always a comeback season for me.
Johnny Manziel

83.) Most guys would have retired. Not me.
Derrick Rose

84.) I’ve grown most not from victories, but from setbacks. If winning is God’s reward, then losing is how he teaches us.
Serena Williams

85.) That’s why I made a comeback in 1988. I knew there were chances of not making it, but I didn’t want to end up at sixty years old and say I should have tried when I was thirty-eight.
Guy LaFleur

86.) I wanted to show the world that it can be done. Anything is possible with the right mindset. If you believe in yourself and you sacrifice and dedicate, with the right help you can come back.
Tyson Fury

88.) I’m not looking for any excuses.
Martina Hingis

89.) A successful person never loses… They either win or learn!
Unknown

91.) The true measure of success is how many times you can bounce back from failure.
Stephen Richards

92.) Resilience is knowing that you are the only one that has the power and responsibility to pick yourself up.
Mary Holloway

93.) Durability is part of what makes a great athlete.
Bill Russell

94.) The more difficult the victory, the greater the happiness in winning.
Pele

96.) During my 18 years, I came to bat almost 10,000 times. I struck out about 1,700 times and walked maybe 1,800 times. You figure a ballplayer will average about 500 at-bats a season. That means I played seven years without ever hitting the ball.
Mickey Mantle

97.) I’ve learned that something constructive comes from every defeat.
Tom Landry

98.) It isn’t the mountains ahead to climb that wear you out; it’s the pebble in your shoe.
Muhammad Ali

101.) It’s important to keep trying to do what you think is right no matter how hard it is or how often you fail. You never stop trying. I’m still trying.
John Wooden

102.) Only a man who knows what it is like to be defeated can reach down to the bottom of his soul and come up with the extra ounce of power it takes to win when the match is even.
Muhammad Ali

Tom and Mike are sportswriters who live in the Twin Cities.

You’re on the Comeback Quotes For Sports page.