Some people will tell you March is way too early to start thinking about fantasy football. Well, maybe they’re right – it’s not even officially spring yet – but, it’s never too early to start planting the seeds to sow you a victory come fall.

And with a little luck, these might just be the “seed-cret” weapons (sorry, I couldn’t resist) you need to cultivate yourself some victories once the fantasy season is underway.

Speaking of Luck: Andrew is back.

As Luck Would Have It

With his shoulder fully healed Andrew Luck finally looks like his old self except for one thing: Is that an O-line in front of him? Yes, a real O-line. I almost didn’t recognize him last season standing upright, looking calm, and not running for his life. And that’s a big deal.

Before he got busted-up, Andrew was an All Star without a line. Now, we have the chance to see him as we never have before, WITH a line — and this one is a dandy. Make no mistake, he was good in 2018, but after his long hiatus and a lot of time in rehab, 2018 was a bit of a test.

Could Luck shake off the rust and get acquainted with the new-look Colts. The answer was a resounding, “Yes!”

So is it any surprise that the Colt-train picked up steam as the season chugged on? Expect the Colts to fully unleash him in 2019–this isn’t going to be the Old Luck Colts–this is the New Luck Colts. And it’s just the Luck you need this year.

And if we stay on the John Colt-train, there’s one perfect player to pair with Luck.

Who To Pair With Luck?

No, his name isn’t T.Y. Hilton but his name (kind of) rhymes with it: Eric Ebron. Okay it doesn’t rhyme.

But regardless, the days of Jimmy Grahaming and Gronking your way to victory are over (but don’t tell your league-mates that, someone inevitably will reach on these guys during your draft which is great news for you) because in 2019 Ebron is the TE to own.

He’s big, he’s strong, and apparently he traded away his old Detroit fryin’ pan hands for some new mitts. The dude can catch, which all of a sudden makes him a stud on the football field. Amazing how that works.

Let the other people in your league go for the Jordan Reeds of the world, you’ve got bigger fish to fry. And if you can manage to pair Luck and Ebron together, the math speaks for itself QB+TE=TD.

Another Quarterback/Tight End Combo To Consider

You want another QB/TE combo? A great one is Mahomes and Kelce, but you already knew that. So unless you want to use at least 2 of your top 3 picks to make it happen, examine other opportunities.

Let’s look at something a little more affordable. Jamis Winston and O.J. Howard/Cameron Brate. Like I said earlier, it’s way too early to tell, but if either Howard or Brate looks like the go-to-guy once the season gets closer to kickoff — then that’s your guy.

Together, they had 97 targets and 11 touchdowns. Howard ended the season on IR, so his health might be the determining factor. Winston likes his tight ends and Bruce Aryans likes his touchdowns. Mike Evans plays like a tight end but also is likely to see defensive coverages designed to stop him. Insert Tampa TE here.

A Caveat on the Tamp Bay Tight End

The only downside is if both Brate and Howard are looking good, they could harm each other’s respective ceilings. Solution: Grab Jamis and call it good. Too many weapons is never a bad thing for a quarterback.

Okay that’s enough of an intro, without further ado, let’s turn up the heat on the HOT TAKES.

While the quarterback field is deep, if you draft the right one, your team can ride him to the championship.

Jamis Winston will be at least QB5

Bruce Arians is the QB whisperer and the Bucs are the worst team in the most explosive division in football — which means come-from-behind points all-season long.

Winston is in a make-or-break year and showed flashes last year. Look for him to work on fundamentals in the offseason, and to light up the scoreboard come September.

Here’s another reason not to reach on Patrick Mahomes: he won’t repeat his 2018 success.

The loss of Hunt was big, and although Mahomes and Co. still looked impressive, the Chiefs struggled a bit down the stretch without their star RB. And defenses took notice. Make no mistake, Mahomes will look gooood next year, but don’t pay the high draft pick, there are better bargains out there.

If Rodgers slides, don’t hesitate to grab him.

The Packers are an offensive team and that offense disappeared at times last season — but it didn’t die. Now, the Pack have a new head coach and Rodgers has more pressure than ever. The pressure never cooks Rodgers — it just makes him better.

No Moon Over Miami

I know it’s winter and Miami sounds nice right now, but stay away.

REPEAT: Steer Clear! Quarterbacks, wide receivers, running backs, tight ends — there is nothing for you here!

Maybe book a trip out west to sunny L.A. instead?

Although Philip Rivers has always had his limitations, offensive weapons is not currently one of them. He’s a solid draft pick at the back end of the draft to get you reliable points and probably even a few blow-up games.

And in contrast to Miami, QB/WR/TE/RB — there’s something for everyone here. Keenan Allen, Mike Williams (his emergence might be one of the most under the radar stories coming out of 2018), Melvin Gordon, and you didn’t forget about Hunter Henry did you?

Cheaper by the Cousins

Kirk Cousins will be cheap and worth it.

It might not always be pretty, but that ugliness will reflect itself in a cheap price tag in the draft (or your auction). Cousins did pretty alright last year despite only 8 wins and all the flak. If you’re drafting, and it seems like a good time to take him, it probably is.

Don’t Sleep on Case the Ace

Case Keenum is headed to the Washington Redskins where he will get a solid O-line instead of the sieves he had to throw behind in Denver (2018) and Minnesota (2017).

He still managed 6 wins in Denver (plus a lot of close losses) despite losing virtually all of his wide receivers. Oh, and was one game shy of the Superbowl the year before after starting the season as a backup for the Vikings.

If Derrius Guice is healthy, and it looks like he is, Keenum has a real shot to perform in the wake of Alex Smith’s injury. Say what you will about his size or his arm strength, Keenum is as competitive as they come and will be dirt cheap in fantasy drafts and auctions.

A Running Back That Can Rule

Fantasy football departs from real NFL action in the sense that running backs typically have a greater stronghold on outcomes of games. They put up points.

Barkley was an absolute dynamo last year, same with Gurley, but unfortunately Gurley might have a real issue with his knee. There are lots of rumors circulating around that I’m not going to speculate on right now.

It is safe to assume that since Sean McVay is a verifiable genius, he’ll be smart enough not to heap the same workload on his star running back that he did last season.

Barkley on the other hand did everything and more that he was asked to do, with little-to-no help from the rest of his team. If Pat Shurmur can turn Big Blue up a notch (even if it’s just one notch) then Barkley is going to outshine his Offensive Rookie of the Year campaign in 2019. Take Barkley with your top pick.

If you played a year of two of fantasy football, you know that featuring a dynamic receiver in your line-up can not only turn around games, but also seasons. Choose wisely.

If Arizona gets Kyler Murray, you go get Larry Fitz

Early on in the season Josh Rosen liked to throw to Christian Kirk and Larry Fitzgerald was injured. But by the end of the season Larry had bounced back and Kirk was injured. And now Rosen might be out the door. And Larry, who was expected to retire, is staying put for at least one more season because he doesn’t want to go out on such a down note (3-13).

That means he wants to play and he wants to win. The cardinals win best when Larry is catching lots of balls and touchdowns. He should be a lot cheaper this year too.

Speaking of price drops: David Johnson. I’m not telling you to go get him, but if the guy that went number one in most drafts two years ago goes on clearance sale, he’s worth consideration. 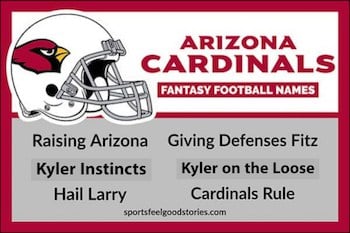 What Can Brown Do For You?

Lots of rumors about where Antonio Brown might land (if he gets traded at all). I’m here to tell you it really doesn’t matter where he goes. You want him on your team.

AB is the best WR in the NFL. Don’t go over-thinking that.

Tyreek Hill is the Second Best Wide Receiver in the League

There, I said it. Hill is fast, he’s quick, he’s dangerous. The only thing faster than Tyreek might be how fast he shot to stardom. He went from being the 165th pick in the 2016 draft to being the most feared offensive weapon in the NFL.

Hill’s QB is a beast. If there is any way at all that you can get Antonio Brown and Tyreek Hill as WR1 and WR2, you do it.

Well, if anything, this Fantasy Football Hot Takes 2019 shows you that there’s going to be a lot to think about in the year ahead. The time to start thinking about is now if you’re serious. As some great football coach once said, “Champions win the off-season.”