You are here: Home / Basketball / Fun Basketball Games For Kids To Improve Shooting

Fun basketball games for kids can spark interest, make the game more enjoyable, and encourage players to practice longer and with more enthusiasm. The following games can be used on your own driveway or park hoop and in organized youth basketball practices.

One of the great things about most of these games is that they can be played – or at least practiced – with just one player.

So, if you have sons or daughters interested in basketball, introduce one of these games to them. Encourage them to teach friends. And, have them practice to improve their skills and just have fun! 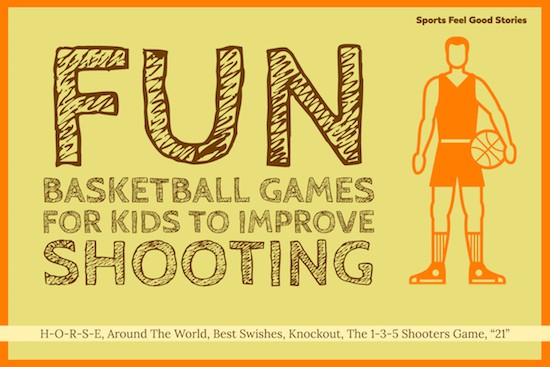 This is a shooting game where players compete by shooting from 7 selected spots on the basketball court. Select spots that are within a player’s shooting distance, e.g. for 12 year-olds, shots are within a 12 feet to 18 feet distance.

The goal of the game is to move “around the world” in a counter-clockwise direction by making shots from the first spot to the last spot.

For the early spots, “chancing it” is a common strategy. But, as you progress and make shots from a few of the spots, players are faced with the dilemma of knowing that a missed shot will wipe out their progress. Not chancing it, and staying in place, keeps your progress but forces you to give up your turn.

The first person to successfully make all of their shots from the selected spots wins the game.

Around the World Video

Named after “Mr. Basketball” George Mikan, this game calls for players to shoot layups off their inside foot with their outside hand alternating sides of the basket for 30 seconds. The goal is to make the most baskets in that amount of time.

For younger kids, allow them to shoot off of both feet. This is a great game to teach rebounding, keeping the ball up high under the basket, and finishing layups. If you’re at a court that has multiple hoops, assign 2-3 players to each hoop, and while one shoots, have the others count the made baskets. It can also be played by one player in the driveway or park.

Two players stand opposite each other on opposite sides of the key by the first block (12 feet apart and 6 feet from the goal).

Taking alternative turns shooting the basketball, you receive +1 point if you swish the shot, 0 points if you make it but don’t swish, and -1 if you miss the shot. A swish is defined as the ball going through without hitting the rim. 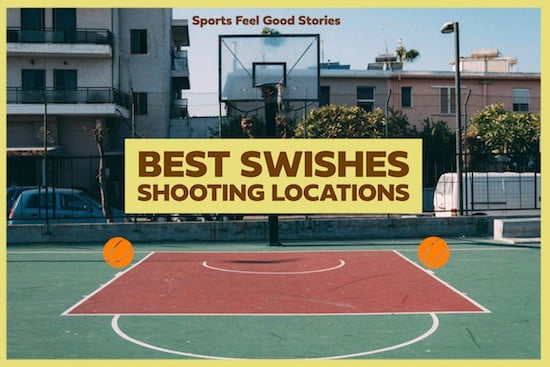 Also known as Lightning, this game is traditionally a player favorite in the under 12 years of age category. Players line up at the free-throw line. The first two players in line each have a basketball.

The object of the game is for the second player that is shooting to make his shot before the first player makes a shot. The first shot a player takes is from the free-throw line, but subsequent shots can be taken from any location. The way this plays out is that if a player misses the first shot, the second shot is usually taken from a few feet away from the basket.

As soon as player one takes their first shot, player two can shoot. Each shooter must make a shot prior to the next person in line making their shot in order to stay in the game.

If the second player makes their shot before the first, the first player is “knocked out” of the game. The last person still playing after all the other players have been knocked out is the winner.

The game creates dramas as players are competing against each other to make a shot before the next player in line can make theirs. In addition to teaching shooting skills, it also works on poise under pressure.

Works best with 5 – 12 players, but can be played with two or more.

To begin to play for Horse, players decide on an order of shooting, e.g. youngest player to oldest player or by calling out “First,” “Second” and so on. Or, play multiple games and take turns going first.

The first player designated to shoot can shoot from anywhere on the court or off. If that player makes the basket, the second player must attempt to make the same shot.

Part of the fun of this game is that in addition to the spot of the shot, the shooting player can also make designations before shooting the shot. For example, a shooter might designate “This must be made off the backboard” or “you must shoot with your left hand (off-hand).”

If the free throw attempt is missed, the player must hurry to grab the rebound. The player shoots from where the rebound was retrieved. If that shot is made, the player gets two points. Then, the second player begins their turn by starting at the free-throw line. Play continues in this pattern.

Players are challenged to earn as many points as they can in 60 seconds of shooting. Here is how points are earned:

The non-shooting player(s) keep a running tally of the points accumulated so the shooter knows. 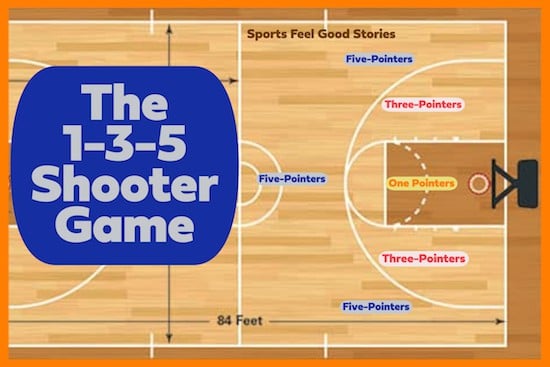 We hope you enjoyed our collection of fun basketball games for kids. The more fun kids having playing the game, the more likely they’ll want to return for more. As Anatole France once wrote, “90 percent of education is encouragement.” Encourage more; criticize less.

Mike is the editor of Sports Feel Good Stories and has written three books on coaching youth basketball including Layups and Life Lessons: 101 Coaching Tips For Youth Basketball.

You’re on the Fun Basketball Games For Kids To Improve Shooting page.

15 tips for Motivating Athletes for Parents and Coaches