How NFL Fantasy Football works is a mystery to many folks. Fantasy sports are incredibly popular – it’s estimated by Fantasy Sports Trade Association that about 1 in 5 people plays in the U.S. But, those who are not big fans of football might struggle with gameplay.

NFL fantasy football is a game of skill that involves virtual professional football teams created by everyday people using real football stars. The draft typically features current NFL players who have traditional scoring roles (quarterbacks, running backs, receivers, tight ends, and kickers) as well as defensive units as a whole (you don’t typically draft one defensive player, but rather the whole team). Points and in some league performance achievements, e.g. yards gained by a running back, reward virtual Fantasy team owners with points for their fantasy team.

This unique game usually involves NFL players, but college football and the Canadian Football League are also the topic of interest for some fantasy football leagues.

Traditional fantasy football usually has amateur participants and the competition runs for the entire season or several seasons. Daily fantasy football has contests that run for much shorter durations such as for a day or a week, and are run by internet companies.

This fantasy football guide explains all the different aspects of this fun approach to football. Find out what the different scoring systems and league types are. Learn about the recommended draft strategy. If you are going to become a league commissioner, find out what your functions are going to be. Also, find out some funny fantasy football team names so that you can create your own unique and interesting team names.

It is the game commissioners who determine which fantasy football scoring they should implement. The choice of the scoring system will further determine how the team owners are going to create their cheat sheet and also the accumulation of points by the players. There are three different types of scoring systems in this game, which are used by almost all the leagues in one or the other way.

The head-to-head leagues and the total points leagues are the most popular types of leagues, but there are many other leagues that can be organized by combining multiple leagues.

In head-to-head leagues, a fantasy team will match against a different team every week. The winner is selected on a weekly basis, based on the number of points received. The teams having the best win-loss record will move to the playoffs.

In total points leagues, teams will build points on a continual basis. The total points will determine the league standings. The other types of leagues include all play, keeper style, salary cap, auction, two quarterbacks, dynasty, empire, an individual defensive player (IDP), Superflex, and pirate leagues.

A fantasy football draft strategy is a plan to complete the draft with the knowledge that you have a team that can give you a shot at the league title. Some of the key tips for the draft strategy for a different round are as follows:

The goal of a good draft strategy is to set the perfect balance between all the position players.

When drafting players, you should look for the best players available. Most people will draft the standard order QB, RB, RB, WR, WR, TE, K, D and so on. It is important that you draft a third running back before a kicker. When selecting a player, value them based on how much they outscore others in the same position, not just based on the number of points scored. The league scoring system is going to play an important role when making this decision.

Mock Drafts: You can run a fantasy football mock draft that serves as a fun way to practice before the actual draft. You can use it to determine where players are likely to go. Even different strategies can be tested during the time. It can take anything from a few minutes to an hour to complete a mock draft. You can use a Fantasy Football calculator to speed up the process.

When it comes to the cheat sheet, it is recommended not to share it with other owners. You should keep it to yourself. You don’t want them to have a better record than you. 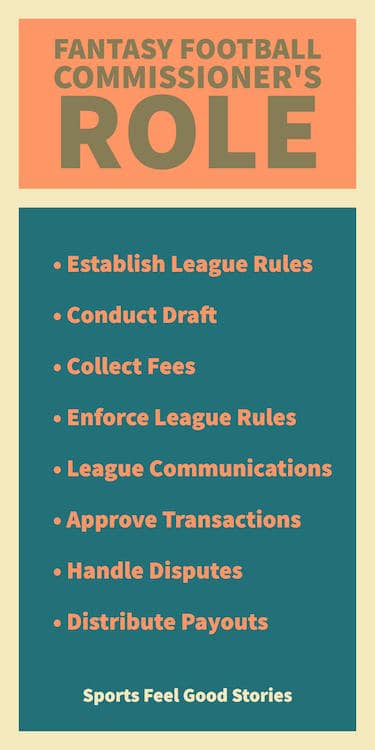 The fantasy football league commission can either be a figurehead or an active-role player. this varies based on the league and its rules. A commissioner can perform different duties based on the rules. For example, some may propose new rules, add or drop players, approve all trades, post announcements for their NFL Fantasy Football league, process waiver wire transactions. In some leagues, they may do nothing more than the Yahoo Fantasy Football league website, upload the rosters and collect entry fees.

An active role-playing commissioner will have the following functions:

The commissioner will create the league even before the season starts. They can create Yahoo Fantasy Football, ESPN Fantasy Football, or choose any other website. Once they sign up and decide to create a league, they will be required to set the guidelines and rules to run the league through the season. The commissioner will be required to determine the following factors:

If you want to be a commissioner and find all this to be a daunting task, there is no need to worry. There are default setups for most leagues and they apply the same rules and starting positions like the public leagues.

A typical fantasy football league will have around a dozen teams. As a commissioner, you should find at least 9 owners. Because this can be a little challenging task, you should start creating your league as early as possible. You can, in fact, start creating the league several months before the season kicks-off. The ideal strategy is to get all your friends and acquaintances involved. You may also ask the league owners to get their friends involved.

3. Determine the Scoring & Set the Rules

As a new commissioner, you can choose the default scoring system and rules for ease and simplicity. However, you will have the freedom to tweak both the scoring and rules to make your league unique. Some of the popular changes which are made to scoring are as follows:

The commissioner can also set the rules regarding players and free agents on waivers.

Sometimes a pending trade automatically sets to be reviewed by the other owners who can either veto or accept the trade. Some leagues can have a rule that prevents other owners from voting. They can only see the pending trade. Then there are leagues where the rules allow the trade to go through when the two involved teams agree.

If you have your friends as owners, it is recommended to provide a brief pending period so that they can veto a trade.

The commissioner may also change the playoffs setup if the championship game is not intended to be played in the last week of the season. This is because many teams will rest their key starters during that time. It will be best to have the championship week three weeks before last week. This can help ensure that the teams will have their best lineups for playoffs.

The commissioner is also responsible for handling disputes. It is recommended to maintain fairness across all your rulings. Usually, you will not come across many disputes. Some of the more common types of issues that can turn into disputes include demands for:

You can eliminate any disputes for the draft by providing as much flexibility as possible. Allow others to have their opinions when choosing the scoring system. All changes thus recorded should be set much before the draft begins. It will be better if the changes to the rules are accepted by the majority number of owners.

Why Fantasy Football is so Popular?

Fantasy football has a unique format, yet it has emerged to be quite popular. Many experts have attempted to explain the reasons behind its popularity. In fact, even academicians have tried to find answers to this question.

According to a study published by Joon Sung Lee and Dae Hee Kwak of the University of Michigan and Joseph E. Mahan of Temple University, fantasy football is so popular because of the level of control it offers to the participants. The study involved testing the relationship between the ads and participation associated with fantasy sports. A number of experienced fantasy players were surveyed and their reactions to advertisements were tracked.

The inferences made from the study that supported the popularity of fantasy football included:

What do the teams play for?

Similar to other aspects of fantasy football, the winning prize can also be set by the commissioner. Different types of prizes can be set for a league including cash, awards, and trophies.

Some of the other common prizes in NFL Fantasy Football include custom fantasy championship rings, autographed NFL jerseys, autographed NFL footballs and prize money which can range from a few thousand dollars to tens of thousands of dollars.

Fantasy football creates interest in many actual games that may otherwise generate little fan interest because of the virtual game implications. A late-season game between two teams out of NFL playoff contention might mean a lot to two fantasy football team owners where the score is close and one team has the lead running back playing. Fantasy football has created more interest in NFL games.

Hopefully, this helped you understand how NFL fantasy football works, but the best way to learn is to join a league. Good luck!

Rick writes about fantasy and the NFL.

You’re on the How NFL Fantasy Football Works page.