Women and fantasy football may seem like an unlikely pairing to some, but here’s my story.

For as long as I can remember, football has run through my veins. I grew up in a suburb of Detroit when Barry Sanders was in his prime. I have fond memories of my parents taking me to NFL games. Thanksgiving in Detroit was always the best. We’d also go to signing events and stand outside the football camp waiting for autographs. After going to games, I would come home and practice kicking a football in the front yard. I was determined to be the NFL’s first female kicker.

While those dreams did not become a reality, football remained a constant in my life. There were some years that I was more interested in it than others, but overall, it remained my favorite sport.

In high school, I participated in a football camp that the Detroit Lions put on for women. Some of the players came and explained football, ran through some drills, and spoke about their experiences in the NFL. This camp helped me to learn more about the game, which I would later use in the fantasy football world.

When fantasy football came around, it was like Christmas! I had the capabilities to “own” my team, pick the lineup, and the battle for a playoff spot. I could finally put all my football knowledge to good use while earning a little extra money! (See How Fantasy Football works.)

The first league I participated in was a small eight-person league with my family. This was back before there were apps on phones. We would use the same computer to draft our team, signing in and out of each of our accounts. We helped each other with draft picks.

The first year was a learning curve for all of us. It sounded easy enough to draft the perfect team, but injuries, bye weeks, and breakout stars shook up the league. I don’t even remember where I finished that year. As I recall, I wasn’t first, but I wasn’t last, either.

No one treated anyone differently based on their gender. We were all just individuals playing a game and looking to win prizes. To be honest, gender thought never crossed my mind until I joined my company’s league.

Three years ago, a co-worker created a fantasy football league at our office. He knew I had an interest in football and invited me to participate in their league. I know for a fact that other co-workers weren’t happy a “girl” was in the league, but others didn’t care. I assumed they had invited me because they thought I wouldn’t have a clue what I was doing. Easy money. I let them believe what they chose to.

For the most part, I felt respected and included in the league, although there were some men who weren’t on board with a woman crashing their party. The men who didn’t really know me were the worst. At first, they would offer ridiculous trades. They wanted my star quarterback for their kicker. They’d try to tell me trading my #1 running back for their #3 quarterback was a steal. I’d shake my head as I hit the “decline” button. The crazy trades and doubts began to fade as the season continued. I was winning games, knocking my competitors down the leader board. My wins were earning “street cred” in our league.

I won that first year. The girl “who didn’t know what she was doing” beat all of them. I was invited back the following year but treated as more of an equal. They recruited other women in the office, who weren’t football savvy, in hopes to win their money.

Some women did well; others would leave great wide receivers on the bench all season. I don’t think the women who didn’t do well failed because they were women. I think they failed because they had too little knowledge or dealt with a lot of injuries on their team. However, some men in the league suffered the same fate.

The only real difference I noticed was a small group of men would only talk to other men about football. They’d ask each other for advice or talk about the “sick play” from the night before. It was common to hear them talking about football at the coffee station but rare for them to include a female.

Last year, our office league consisted of 12 teams. The men who were judgmental had moved on to other companies, leaving a great group of people who didn’t care about gender. We had a big draft party at my boss’ house and everyone enjoyed themselves.

I personally didn’t feel judged based on my sex and I don’t think anyone else did, either. We were all equals, just co-workers looking forward to having something else to talk about than work.

Seven of the teams were owned by women. Most of them knew what to do and battled hard against the men’s teams. There were a couple who made rookie mistakes, but I’ve seen those mistakes made before by men.

Our four-team playoff round starred three women owners and one male owner. Two women advanced to the “Super Bowl” and we crowned another woman champion. (Sadly, I came in second and I’m still not over it.)

How Some Women Have an Advantage in Fantasy Football

As fantasy football grows each year, so does the number of women involved. It is estimated that nearly 20% of fantasy football owners are women. Women are joining leagues at a fast rate and there are even all-female fantasy football leagues out there. I’ve never thought about joining one, but I think this would be a good idea for any woman who wants to learn the game and not feel intimidated by a man.

To be honest, I think women who aren’t heavily invested in football may have an advantage. There’s no team to feel loyal to, no player that you must draft because you own their jersey. Admittedly, I’ve played certain people each week because I was a fan. Sometimes it was the right call. Other times, my bench racked up more points than my starting lineup.

Women also tend to be organized and plan ahead, which can do wonders for a fantasy owner when bye weeks roll around. A lot of fantasy football is planning ahead, watching out for bye weeks, and certain matchups.

A woman doesn’t need to know who was drafted #1 this year (Baker Mayfield, if you were interested) or who won the Super Bowl last year. They just need to understand the basics of fantasy football and a few rules. (One of them being never draft a kicker first!) With the advances of technology, it’s very easy to Google a player and see if they’ll be a draft bust or not.

Some women know who Gronk is and some men have no idea what a “Gronk Spike” is. When it comes down to it, anyone can win in their league with a little knowledge and luck.

If you’re a woman, don’t let the game intimidate you, but make sure you do some research. While the draft magazines are still published every year, a lot of information is on the internet for free. ESPN is a great place to learn about the game and the players, especially if you sign up to be an Insider. (If you’re really unsure about fantasy football, the Insider subscription also has a feature that will show you who to put in your lineup each week.)

Have Fun With It and Don’t Stress Out

Don’t stress too much about the draft or the rest of the season. You don’t have to watch the NFL Network every day. You don’t even need to watch a football game that week. Download the app and follow along.

Remember to check your lineup each week for injuries and bye weeks. If you receive a trade request that you’re not sure about, do some research or asked an unbiased person for advice. For the most part, fantasy football is luck mixed with a lot of praying that your quarterback doesn’t get knocked out for the season.

If you’re a man, don’t expect you’re going to win against a woman just because the NFL is dominated by men. You never know, your female competitor may have grown up with big football aspirations!

Kati Jewell is a Michigan native who loves football. When she’s not on her boat with her husband and daughter, she can be found at yoga class or lost in a good book. 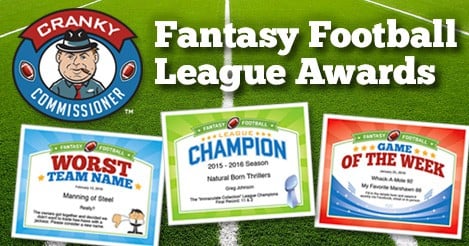