You are here: Home / Inspiring Team Quotes To Bring Out Your Best

These inspiring team quotes can help you achieve goals that might be impossible for you to imagine doing in isolation. Whether it’s in sport, science or everyday life, teamwork is what helps you achieve success and simplify life.

As an individual, you will notice significant improvements in yourself when you work as part of a team that is focused on a specific goal. Some of the biggest discoveries and achievements in history are a result of teamwork. Even the greatest achievers have been successful because they had a team working alongside.

Motivational insights have the power to instill the spirit of camaraderie in anyone’s heart. Read them and share them with friends, colleagues, and teammates. Teamwork makes the dream work.

Definition of a great teammate: a person who makes their teammates look great.
Emily Kohibus

I am a member of the team, and I rely on the team, I defer to it and sacrifice for it, because the team, not the individual, is the ultimate champion.
Mia Hamm

My teammates, they put me on their backs and they wouldn’t let me down.
Jerome Bettis 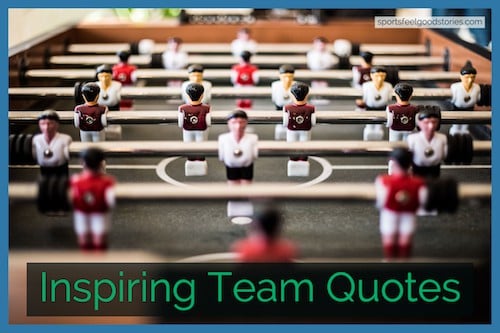 Teamwork is the ability to work together toward a common vision. It is the fuel that allows common people to attain uncommon results.
Andrew Carnegie

We realized that no one of us could be as good as all of us playing unselfishly.
Bill Bradley

The important thing is that your teammates have to know you’re pulling for them and you really want them to be successful.
Kobe Bryant

Remember, teamwork begins by building trust. And the only way to do that is to overcome our need for invulnerability.
Patrick Lencioni

I invite everyone to choose forgiveness rather than division, teamwork over personal ambition.
Jean-Francois Cope

Unity is strength. When there are teamwork and collaboration, wonderful things can be achieved.
Mattie Stepanek

If I miss anything about the sport, it’s the camaraderie of teammates.
Bo Jackson – Check out Bo Jackson on Twitter 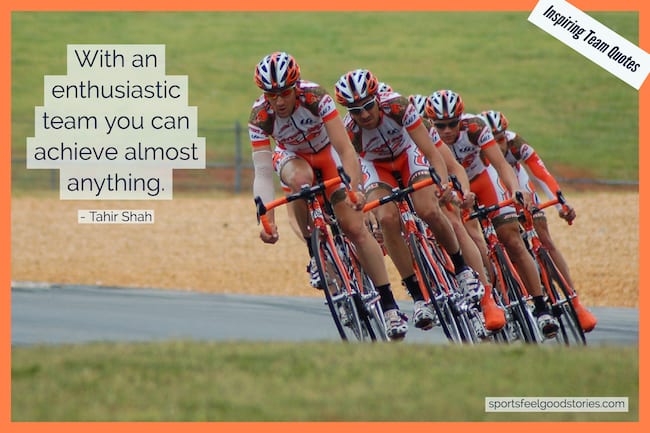 Commitment to the Group Quotes

If everyone is moving forward together, then success takes care of itself.
Henry Ford

Encourage your people to be committed to a project rather than just be involved in it.
Richard Pratt

Commitment is the enemy of resistance, for it is the serious promise to press on, to get up, no matter how many times you are knocked down.
David McNally

The kind of commitment I find among the best performers across virtually every field is a single-minded passion for what they do, an unwavering desire for excellence in the way they think and the way they work.
Jim Collins

With an enthusiastic team, you can achieve almost anything.
Tahir Shah 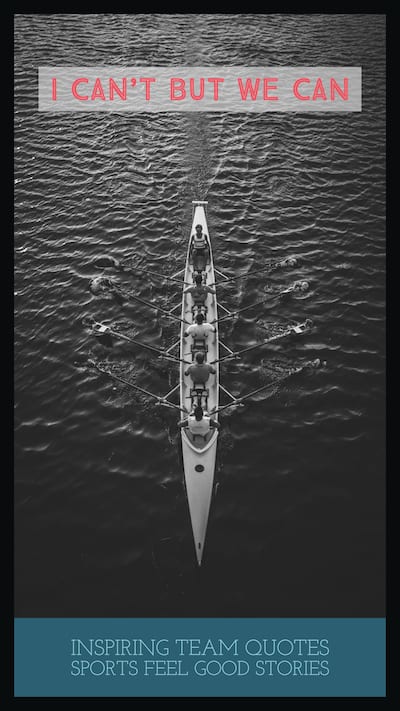 Life is like a dogsled team. If you ain’t the lead dog, the scenery never changes.
Lewis Grizzard

Teamwork is essential – it allows you to blame someone else.
Unknown

Individuals can and do make a difference, but it takes a team to really mess things up.
Unknown

No individual can win a game by himself.
Pele

Most achievements in science are to a certain degree of group effort.
Willard Libby

Both group effort and individual testimony flow from conviction as to the role of people on earth.
Gilbert F. White

The achievements of an organization are the results of the combined effort of each individual.
Vince Lombardi

Team spirit elevates with a broad-based contribution to the group effort. It’s especially important for the high-performing leader to avoid the situation of one or two people being the only contributors during a meeting.
Andrew J. Dubrin

It’s been such a group effort. When you’re a new band and you have limited resources, you end up getting people that are there because they love what you do, and that’s great.
Balthazar Getty

The cast, staff, and crew of a live theater work together toward a common goal: a good performance. Thus, theater is necessarily a group effort.
Laurence Sterne

When you work in TV, it’s such a group effort, it’s not about you.
Kylie Minogue

When we have the confidence that we can orchestrate the group effort required to realize them, we dare bigger dreams.
Justin Rosenstein

I think even if you’re on a screen or you’re in a play, it’s always a group effort. It’s not just the actors, it’s the editor.
Stockard Channing

Collaboration Makes All The Difference

I really believe the only thing you can control in those situations is what you do as a player but also how you interact with your teammates, which is critical.
Brian Griese

I knew at a young age, whether I was playing baseball or hockey or lacrosse, that my teammates were counting on me, whether it be to strike the last batter out in a baseball game or score a big goal in a hockey game.
Wayne Gretzky

Being there every week for my teammates is really important to me. It’s about accountability.
Peyton Manning

Mike is the author of 3 basketball books and publisher of Sports Feel Good Stories.

You’re on the Inspiring Team Quotes To Bring Out Your Best page.

Never Give Up Sayings