Julio Jones Fantasy Football Names will make your team stand out amongst competitors in your league. Fellow team owners, the commish, and others may notice that you have some game. And speaking of game, the Atlanta Falcons’ receiver can literally take over a game.

Now’s your chance to take over your league with a great name featuring this receiving star. Most NFL analysts believe it could be a big year for the Falcons. To go deep in the playoffs, they’ll need another big year from this star. Enjoy these selections.

Me and Mr. Jones.

Me & Julio Down By The Bernard.

Julio Let the Dogs Out.

Chill to the Jones.

The Devil in Julio Jones. 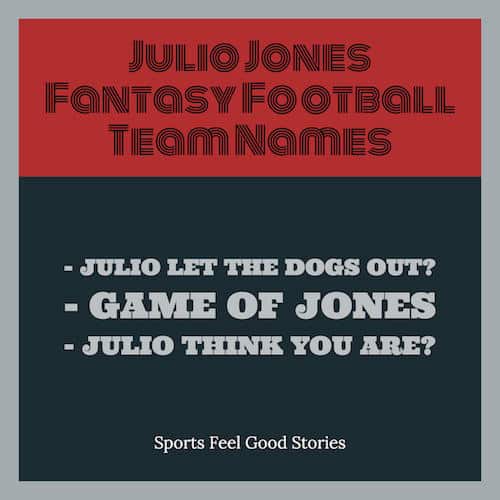 Julio Think You Are?

Make no Jones about it.

1.) Julio played football, basketball and ran track and field in high school. He grew up in Foley, Alabama.

2.) Jones played basketball in high school against DeMarcus Cousins, and fans say that he was able to get a dunk in the game against him.

4.) He was listed as the number one receiver in the nation in 2008 by Rivals.com.

5.) Jones skipped his senior year in college to go pro, but not before he helped win a national championship for the University of Alabama.

He’s made the Pro Bowl three times and shows no sign of slowing down.

Recently, the receiver lost a $150,000 earring in a lake. Jones’ attempt to recover the piece of jewelry has included hiring a dive team to search for it. But, bottoms of lakes tend to be pretty dark.

The Falcons’ star is scheduled to earn some $11.5 million playing this season. That should be enough to cover a replacement earring or two.