These Matt Ryan Fantasy Football Names are as hard-hitting as the 2016-17 Atlanta Falcons’ offense. Matty Ice had a career year in 2016 and he shows no signs of letting up.

Perhaps somewhat overshadowed by the excellence of Aaron Rodgers and Tom Brady, Matty Ice stepped out into the lights. An intelligent QB with a strong arm and good decision-making, he’s a force to reckon with. 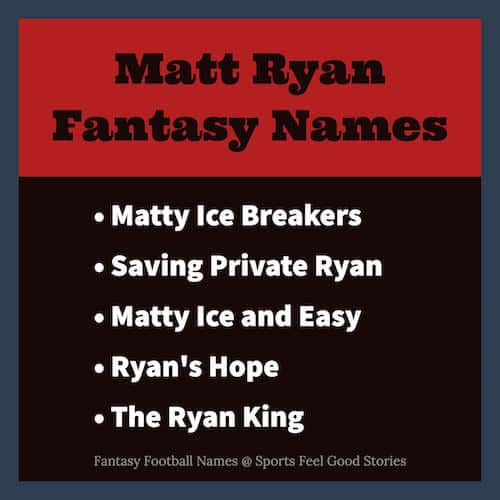 Does this approach make it difficult for opposing defenses? Well, I think if you polled defensive coordinators, the overwhelming response would be, “YES!” It’s tough to focus in on any one weapon. Plus, having an elite receiver in Julio Jones is a challenge in and of itself.

Matts Tryan to throw it in the Endjones

Check out our Funny Fantasy Football Names List for 2015.

Matt Ryan had a passer rating of 117.1 in the 2016 season. Who is the last quarterback to have a higher season-long rating? Rodgers? Nope. Brady? Nope. Nick Foles? Yes, Foles posted a rating of 119.2 in 2012. Foles threw for 27 touchdowns and just two interceptions in 13 games.