Understanding March Madness terms will help you talk conversationally with most basketball fans. The NCAA Basketball Tournament is a big deal. The annual, three-week NCAA Division I Basketball Tournament accounts for over 85% of the NCAA’s annual revenues. It’s estimated that some $9 billion are wagered on the event. The hotels in Las Vegas are at 98% capacity the first weekend of the Tourney.

It’s estimated that some 70 million people fill out a bracket. Filling out the bracket, researching teams, and sneaking into the break room to watch games may account for some of the nearly $2 billion lost in workplace productivity due to March Madness.

So, around water coolers at businesses and at neighborhood gatherings, lots of folks will be talking about the tournament, the latest games, and their brackets. If you’re unfamiliar with how the tournament works and would like to have some talking points to impress your boss, we’ve put together some common March Madness terms. With the “Just the Facts” section, we explain the terms. And, the “Should Know” provides some interesting insights into the definitions. 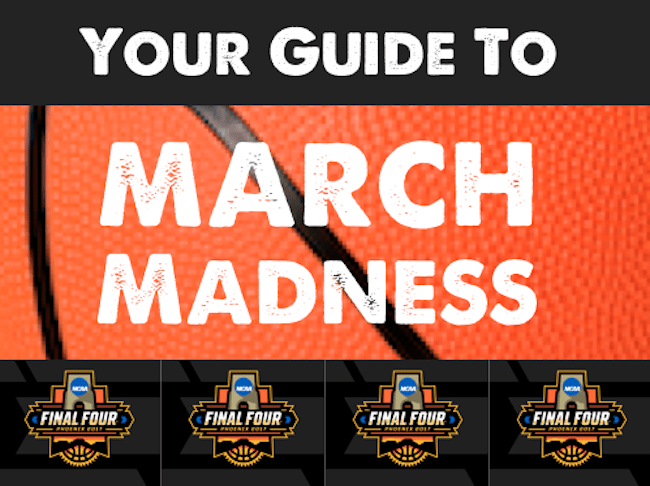 Just the Facts: The official start to March Madness is on Selection Sunday. This is when the NCAA Division I Men’s Basketball Committee reveals the 68 teams that have been selected for the field for that year’s basketball championship. In 2020, Selection Sunday is March 15, 2020.

Should Know: Think of a series of videos featuring players who will cheer and take selfies in civvies when it’s announced who their opponent will be. Consider watching only if your team is on the bubble or when the alternative is cleaning the house. The Tournament is awesome – arguably providing the sports world’s best drama – but, Selection Sunday is just not that interesting for the casual fan. Read your favorite online news source that evening or in the paper on Monday morning to find out the match-ups.

Just the Facts: The brackets refer to the tournament brackets that show a tree diagram with two teams playing each other to move forward. For the NCAA tournament, it’s a single-elimination event with one team emerging from 4 regions of the country to battle in the Final Four games. Most nearly every office employee in the country bets on this tournament. When folks talk about brackets, they’re usually lamenting about how poorly their picks are doing, e.g. “Who would’ve thought Gonzaga would lose in the second round?”

Should Know: If you’re in an NCAA office pool, remember this advice: the more the entries your contest has, the more daring you need to be with picking some upsets. If the number of entries is small, going with mostly favorites is a sound strategy.

Just the Facts: Bracketology refers to predicting the field of college basketball teams in the NCAA Basketball Tournament. To select winners in online games and office pools, contestants nearly always, “fill in the brackets.”

Should Know: Bracketology is one of those words like “mixology,” where folks add “ology” to the back end to try to make simple things sound more scientific. For Pete’s sake, you’re mixing drinks — isn’t that what we call a bartender? Bracketology is no different. Casual fans who watch Sports Center may think they have a system, but everyone has a plan until their top pick loses to a #12 seed in the second round. How do you like them apples Mr. Bracketologist?

Just the Facts: Refers to a team that upsets a favorite, thus ruining your bracket because you had the higher-ranked team advancing deep in the tournament.

Should Know: Bracket Busting teams happen regularly during the NCAA tournaments, but don’t look at the #16 seeds too long. #16 seeds lose to #1’s with uncommon regularity — they’re 0 & 124.

Just the Facts: Lose one game and you’re out of the tournament — it’s a knockout tournament. The finality of the contest adds to the drama.

Should Know: The win or go home approach seems to bring out the best in sports. Even though #1 seeds do well in the opening round, at least one # 1 has been eliminated in round two in five of the last six years.

Just the Facts: The apparent strategy of many teams through the tournament: Survive the opening rounds and hope your team gets on a hot streak.

Should Know: “Survive and Advance” is also the name of a 30 FOR 30 documentary on the 1983 NC State Wolfpack, coached by Jimmy Valvano. They won nine “knockout games” in a row — seven of which they were losing in the final minute. Ultimately, they upset No. 1 Houston, aka Phi Slamma Jamma, despite being one of the biggest underdogs ever in the final game.

Just the Facts: Another name for the NCAA Basketball Tournament.

Should Know: How did the “Big Dance” name come about? Marquette’s basketball coach Al McGuire wore a bright blue blazer during much of the 1977 season. A reporter asked him if he’d wear it during the NCAA tournament as well, and the coach replied, “Absolutely. You gotta wear the blue blazer when you go to the big dance.” Marquette won the NCAA championship that year and the “Big Dance” name caught on with many.

Just the Facts: The lower-seeded teams that advance further than anyone could have expected.

Should Know: When a low seeded team strings together a few wins, you can weave into your conversation that it’s a “Fairy Tale Run” to sound smart. But when that same team loses, make sure you comment on the clock “striking midnight”, as the Cinderella team has finally been beaten.

Just the Facts: The 1979 Championship Game featured Larry Bird’s Indiana State Sycamores taking on Magic Johnson’s Michigan State Spartans catapulted the tournament to new levels of excitement, viewership, and sponsorship. Some suggest that this was the true birth of “March Madness.” Although the Spartans pretty much led from start to finish, the marquee value of both players took root. It didn’t hurt that both went on to Hall of Fame careers in the NBA.

Should Know: In the pros, Bird was notorious for his trash talking. Per Wikipedia, here’s one story: “Late in a tied game against the Seattle SuperSonics, Bird told SuperSonics forward Xavier McDaniel, who was guarding him, “I’m going to get [the ball] right here and I am going to bury it in your face.” As McDaniel remembers it, he responded by saying, “I know, I’ll be waiting.” After a timeout, Bird made two baseline cuts, then posted in the exact spot he had indicated to McDaniel, paused, turned, and made it in his face. He finished up the sequence by telling McDaniel, “I didn’t mean to leave two seconds on the clock.”

Just the Facts: Ok, the NCAA has established names for many of the tournament games. The four teams play games to whittle the number down to 64. From there, each round cuts the number of teams in half.

First Four: It used to be there were 64 teams in the tourney, but recent additions were made to increase the total to 68. The “Play In Games” features the last four teams admitted to the Big Dance.

Sweet Sixteen: When the field is reduced from 68 teams to 16 teams, we’re down to the “Sweet Sixteen.”

Final Four: When four teams remain – the winner of each regional tournament.

Should Know: The NCAA works hard to protect trademarks on many of these names. I think they had to add “NCAA” to Sweet Sixteen, but the other names and “March Madness” are trademarked as is. So, if you’re a retailer looking for a sale in the 3rd month of the year, tread carefully or think about using lines like, “Stock up for the Big Games.”

Should Know: In the early days, players and coaches were hoisted on each other shoulders to cut the nets. Scissors were found near the scoring table. Now, tournament officials make sure a ladder is in a handy location. Scissors are specially made for the occasion and are usually branded with a sponsor’s name.

Just the Facts: “One Shining Moment” is the name of the song that plays immediately upon the tournament’s conclusion. It includes a series of highlights from game action. Teddy Pendergrass and Luther Vandross recorded versions for many of the years it was played.

Should Know: The song was written on the back of a napkin by singer-songwriter David Barrett in 1986. He said he wrote it after watching Larry Bird play on TV in a bar.

If you’re brand new to March Madness, understanding the terms above will help. You’ll be able to carry on a conversation and feel confident in your knowledge.

Mike is a former basketball coach, has written three basketball books, and is the founder of Sports Feel Good Stories.