Our “Mini Golf Guide: Much Ado About Putting” covers a wide territory. From the history of the game to the best courses, and from pop culture references to playing tips, there’s something for everyone.

It might be a lazy summer afternoon, or a child’s birthday party, or maybe even a first date. A mini-golf outing is one of those recreational sports that nearly everyone has experienced. The windmill obstacles, the water holes, and aiming for the clown’s nose on the last hole are something most of us know.

While the game was born across the pond, say “putt-putt” to anyone today and they won’t picture a miniaturized golf course for women. More than likely, they’ll think of a carnival-like funhouse array of obstacles and animatronics.

A staple of tourist hubs like Orlando, Florida and resort towns like Myrtle Beach, South Carolina, miniature golf courses have dotted the American landscape since the 1920s. But the game itself is much older than that.

It’s hard to imagine, but one of America’s most popular leisure activities actually found it starts on a members-only green for women golfers in Scotland. St. Andrews, in Fife, Scotland, has been called the “Cathedral of Golf,” and has often been the site for the British Open, the oldest of the four major championships in professional golf. It was there in 1867 that the Ladies’ Putting Club of St. Andrews was formed.

An 18-hole course with short greens was constructed for the women interested in playing golf, but, because of the social conventions of the time, these women were not allowed to swing the golf club past their shoulders.

It was unacceptable for women to publicly perform the “violent” movement that a proper golf swing required. So these women played on a series of putting greens, and their version of the game paved the way for the popular activity.

It wasn’t until James Barber began construction of a small golf course in his backyard in 1917 that the game we recognize as mini-golf today was seen in the States. Barber built an 18-hole course to entertain his houseguests in Pinehurst, North Carolina. Barber, whose target audience was the experienced golfer, named his course Thistle Dhu (pronounced “that’ll do”).

The course was meticulously designed, including gardens, fountains, and geometrically-patterned pathways. Every hole on the course could be made in one shot, but it certainly wasn’t built for children. The longest hole was 71-feet and the shortest was only 12-feet. All the media attention paid to the course led to the first use of the term “miniature golf.”

The inventor of Modern Miniature Golf

The popularity and publicity of Barber’s Thistle Dhu course spurred the development of pitch-and-putt courses across the country. These courses were largely putting greens, or smaller, par-3 courses open primarily to the wealthy. However, when Thomas McCulloch Fairbairn developed an artificial green, the game we recognize today really took off.

In 1922, Fairbairn created an artificial green using a mixture of cottonseed hulls, sand, oil, and dye. This new playing surface allowed for miniature golf to become accessible just about anywhere. But this wasn’t his only innovation. Fairbairn is also credited with the addition of artificial bunkers, curves, and water hazards.

These developments led to a veritable boom in miniature golf courses throughout the nation. By the late 1920s, there were over 150 courses on building rooftops in New York City alone. Fairbairn’s artificial green stimulated growth in the game that often leads to his being called the “inventor” of miniature golf.

These days, there is a miniature golf team event known as the Fairbairn Cup held at Pirate Island Miniature Golf on Seven Mile Island in New Jersey. For six years running, this event donates proceeds from the tournament to the National MS Society.

Tilting at Windmills and Other Mini Golf Obstacles

During the Great Depression, regulation miniature golf courses became too expensive for everyday Americans. As a result, so-called “rinkie-dink” courses sprang up throughout the country as a replacement.

These courses created their obstacles from all sorts of materials, including rain gutters, old tires, pipes, and barrels—pretty much anything they could find. From there, the obstacles most Americans are accustomed to seeing at their local mini-golf course emerged.

Tilting at windmills was no longer the sole domain of Don Quixote by the late 1930s. In 1938, Joseph and Robert Taylor, from Binghamton, New York, started building and operating their own courses.

These differed from the ones in the 1920s and 1930s because they had meticulous landscaping, but also obstacles, including the sport’s seemingly ubiquitous windmills, as well as castles, wishing wells, and other fantasy elements.

The Taylor brothers built courses throughout the country and became the main supplier of obstacles in the industry. Taylor’s popularity led to their working with the US government, providing prefabricated courses for soldiers to enjoy in Korea and Vietnam.

Nowadays, miniature golf courses that feature interesting obstacles might be referred to as Crazy Golf or Adventure Golf.

Ok, wait a minute, miniature golf is so popular that it has two days? Halloween and Thanksgiving only get one each. No, it’s true.

So, you have two opportunities to brush up on your putting game and have some fun.

How is Miniature Golf Played?

Derived from the putting portion of regular golf, mini-golf is usually played on a course consisting of many holes. Most mini-courses follow regular courses and have 18 holes. And others, use a multiple of 9, e.g. 27 holes or 36 holes.

Each hole is typically short. Most are less than 12 yards from the tee (where you start) to the cup. The putting surface is usually astroturf, but real grass, carpet, and other surfaces may be used. Two-by-four pieces of wood line the fairway and provide a border to minimize the chance of the ball going out of play.

On some courses, obstacles abound to make it difficult to reach the hole. Small targets, swinging objects, water and sand, increased elevation, multiple levels and more make the game challenging.

Players record their strokes (each time they hit a put) and much like regular golf, the low score total wins. Par is usually two strokes. A hole-in-one is called an ace.

The order of play in mini-golf: After the initial putt, the player closest to the hole putts till finishing. Then, the next closest, and so on. 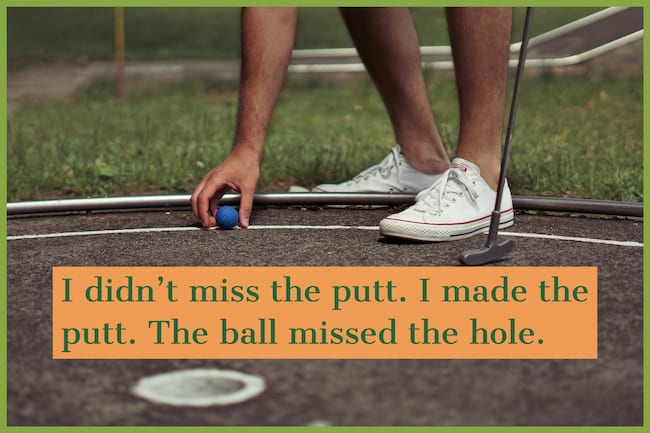 Here are some tips we’ve gleaned from expert players and champions on improving your game.

By the 1950s, miniature golf was seen as wholesome family fun throughout the country. Whimsical, trick-shot courses with moving hazards dotted the American landscape. But Don Clayton felt it had all gone too far.

Clayton, America’s foremost advocate of miniature golf as a serious sport, founded Putt-Putt Golf and Games. He sought to emphasize skill and player development, and his striped down version of the game led to professional Putt-Putt tournaments and even a sporting federation.

Not long after Fairbairn’s artificial green allowed for the growth of the game, Garnet Carter, an American entrepreneur, patented a version of miniature golf that he called “Tom Thumb Golf.”

Carter’s Tom Thumb course was an incredible success and it quickly led to the first franchises for the sport. Within a few years, there were thousands of Tom Thumb courses opened all over the United States. These courses, and others based on them, remained popular until the Great Depression, which ultimately forced hundreds of course closures throughout the country.

The WMF is the umbrella organization of Minigolf sports associations worldwide and continental associations in Africa, America, Asia, Europe, and Oceania. It has 40,000 registered players representing more than three dozen countries.

These mini golf courses don’t feature any of the traditional obstacles seen at themed-courses, simply hills, curves, banks, and water hazards. The surfaces sanctioned by the WMF include fiber, concrete, artificial grass, and felt, which is popular in Sweden and Finland. The WMF refers to the courses with artificial grass and obstacles commonly seen in Britain and the States as Adventure Golf or Crazy Golf.

While courses under Putt-Putt’s serious style are found throughout the United States, mini-golf courses that include exaggerated and unrealistic props, such as windmills and oversized alligators, are far more common.

50 of these courses are located within a span of 30 miles in Myrtle Beach, South Carolina, otherwise known as the mini-golf capital of the U.S. Myrtle Beach is also the home for the ProMiniGolf Association annual “Masters” tournament. Mini-golf, and the beach, serve as the town’s main tourist attractions.

Around The World In 18 Holes, Lake George, New York

Can Can Wonderland, Minneapolis, Minnesota

Among the more innovative developments is the glow-in-the-dark, indoor courses. These immersive experiences bring a whole new level of play to the traditional game. Indoor glow-in-the-dark courses are popular throughout Scandinavia, Canada, and Finland, as well as many malls throughout the United States.

One of the leading companies developing these courses is known as Putting Edge. Putting Edge provides a new and exciting twist on the traditional game of mini-golf. According to their site, from the moment you enter one of the “black-lit” courses, you have left “the real world” and have entered a universe full of fun, imagination, and activity.

You will be immersed in a kaleidoscope of dazzling “Glow-in-the-Dark” colors, images and sounds, rocking your senses in unordinary, inevitable ways. Transport from the ocean depths to lush rain forests, from medieval times to the Aztec jungles, as you vie to sink your putt on our 18-hole challenging minigolf course.

Since miniature golf has been one of the most popular pastimes in America, it’s no surprise that it made its way to Hollywood.

The real-life game is so popular that a broad array of digital games have been created to capture the real-life experience. Some of the best digital, mini-golf games include:

First of all, here’s a virtual reality game with both a single-player mode, an online component, and a multi-player. Plus, you can create your own holes. Love it!

Most certainly, you had me at “steampunk.”

And lastly, a multiplayer mini golf game for up to 12 different players. Golf amongst the pyramids or better yet, in the Netherlands with real windmills. Cool!

What’s Next for Mini Golf?

To sum up, the game of mini golf is a popular recreational game that continues to expand in new ways. From indoor to glow-in-the-dark, to some very creative obstacles and course settings, variations of the game expand.

Could televised competitions be around the corner? A mini-golf tour for professionals that grows in popularity. Crazier course locations and holes? Who knows? For now, in its many forms, it’s a very popular recreational game that is now passed on from generation to generation.

It seems there are always great mini-golf options in vacation destinations near the beaches or lakes.

Mini Golf Courses Near Me

So if work or vacation takes you to new cities and countries, do a Google search on “Mini Golf Courses near me.” You’re sure to find an option or two of interest. Pirates Cove (the original adventure golf) and Monster Mini Golf are a couple of popular chains with great courses.

Oh, and you have a target to shoot for. The low round in mini-golf is 18 strokes. That’s right: a hole-in-one on every hole. Wow!

David Fernandez is a High School English teacher, basketball coach, and freelance writer. He sports a 36 handicap at most mini-golf courses and always loses the ball at a chomping alligator.