You are here: Home / Stephen A. Smith Bio, Net Worth, Quotes

Outspoken sports commentator Stephen A. Smith is known for his frank and often provocative opinions. But what is his background? Did this man of bombastic certitude and critical commentary ever play the game himself?

Let’s take a deeper look into the life of Stephen A. Smith, ESPN sports commentator.

Smith began his sports reporting career at the Winston-Salem Journal as a sports writer. He later worked at the Greensboro News and Record and then the New York Daily News.

In 1994, the Philadelphia Inquirer hired him to write NBA articles and columns. He was promoted to a general sports columnist in 2003, the same year he joined ESPN. 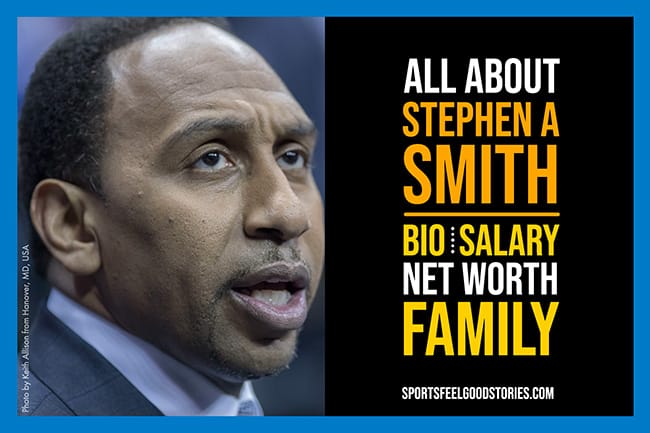 Smith previously co-hosted the program with Skip Bayless, beginning in 2012. Bayless left the show in 2016.

Smith also appears frequently on other ESPN programming, including SportsCenter as an NBA analyst.

His podcast, The Stephen A. Smith Show, can be heard on ESPN Radio’s PodCenter.

He is also credited as an actor, appearing in movies like I Think I Love My Wife and Almost Christmas and the TV soap opera General Hospital.

How old is Stephen A. Smith?

How tall is he?

What is his middle name?

His middle name is Anthony.

What is his nickname?

While most colleagues refer to him simply as ’Stephen A’, he has earned a nickname or two along the way. The unapologetic critic is sometimes known as ‘Screamin’ A’. Also, check out these favorite nicknames of his former First Take co-host:

Skip Bayless lists his favorite nicknames for Stephen A. Smith:

My favorite nicknames for Stephen A: Stephen Naismith (he thinks HE invented basketball). Stephen A. Myth. Robin A. Smith.

He graduated from Thomas A. Edison Career and Technical Education High School in Queens, NY.

What colleges did he attend?

Did Stephen A. Smith play basketball? Did he ever play for an NBA team?

Smith played point guard on the Winston-Salem State basketball team in Winston-Salem, North Carolina. He never played for an NBA team, but did begin as a reporter covering the Philadelphia 76ers and eventually became a general sports columnist.

Is Stephen A. Smith married?

Smith is notoriously private about his family life. He has kept his relationships out of the public spotlight his entire career. Rumors swirl about him dating a girlfriend and even that he may be married but keeping it under wraps.

Does he have children?

It is believed he does not have any children.

Who are his parents?

Stephen’s mother Janet Smith died of cancer in 2017. He has kept the identity of his father a secret from the media, although he said his father worked as a manager of a hardware store.

Does he have any siblings?

Stephen A Smith was raised in Queens, New York with five other siblings. He has four older sisters. His younger brother died in a car accident in 1992. He also has a half-brother on his father’s side of the family.

Stephen A is known for his bold statements made with swagger and bravado. Let’s take a look at some of his more noteworthy quotes over the years.

On his personal motivation

You have haters from all walks of life. I could care less who wants me to fail. They inspire me. Motivates me.

Corporate America doesn’t give a damn about you. It does not care about your feelings. It wants productivity, and whoever doesn’t produce is going to be pushed out, and the way is going to be paved for somebody else to step into your shoes who can do the job.

I pride myself on respecting my colleagues.

On his provocative style

No one tells me what to think. I think for me.

If no one hears you, and no one listens to you, it doesn’t matter how good you are because no one cares about you.

I have opinions that are based on the facts that are presented to me. I don’t apologize, I stand by it. If I’m hated, so what? If I’m loved, so what?

I’m no liar. I could have been wrong, but I ended up not being [wrong]. But I’m no liar.

The truth hurts sometimes, particularly when it involves someone at a low point in their life.

You don’t buy chemistry, nor do you manufacture it, it is what it is.

As resolute as I feel about my convictions, if I’m wrong, I’m man enough to say I’m wrong because I find it a rare occasion anyway.

You can criticize me. You can crucify me. And, you can love me. You can hate me. Just don’t make the mistake of calling me inauthentic, because you’d be a damn liar.

Money is here to be made in America, for those with the ability to earn it legitimately. The exception appears to be when you’re young, gifted, and black. There are always questions when the three intertwine.

I don’t speak for all of us, but I’m pretty sure that my thoughts and opinions and beliefs identify with most people who are black because that’s my soul.

I came up in this industry at a time where you had to be a journalist. You had to break stories. You had to break news to elevate your career, to get to a certain point and a certain level in this business, before you even had the license to give your opinion, especially if you were a black man.

I date African-American women. That’s all I date. In my family, it was never discussed—but I love black women. Nothing beats a sister. However, when you see a female like Jennifer Lopez, you have to acknowledge that there are many beautiful Latino women as well.

I’m not anti-anything. I’m not anti-Jew or Gentile, I’m not anti-white, but I am pro-black. I am pro my people. And I love us so much that it gets on my nerves when we do stupid things.

On working at ESPN

Those who are great get more than those who are not. Let me be unapologetic in what I am about to say. Everybody at ESPN or in the world of sports media does not deserve to be paid what I get paid. I don’t believe it. I just don’t, and I’ll never apologize for it. And, I didn’t bust my tail all of these years for somebody to come along late and say ‘Dammit, it’s about fairness. We think they should get paid as much as you.’ What? You don’t generate the revenue I generate. You don’t generate the ratings I generate. And, you ain’t as popular as me. You don’t resonate as much as me. You don’t deserve as much as I get.

If the show sucks, I ain’t happy. If the show is damn good, I’m very happy.

On his early career

When I was at the ‘Philadelphia Inquirer,’ I was promoted nine times in my first 13 years. I ultimately went from general assignment to beats on St. Joe’s and Temple, to backup writer, to NBA writer, to NBA columnist, to ultimately, in 2003, to general sports columns.

The reality is that you’re entitled to believe what you want as long as you’re not imposing your beliefs on other people. …I don’t think [atheists] need to shut up. The reason why I don’t think they need to shut up is because there’s a whole bunch of people in this world that we can look at and say they need to shut up and they certainly don’t. You got everybody fighting for their own individual cause. This is their cause. We might not like it. I don’t agree with it at all, but they do have a right.

You don’t have the right to hold somebody accountable for standards you refuse to apply to yourself.

Don’t fake what you feel. I’ve never been about that. I never will be about that.

While winning may not always personify the Big Apple, attitude certainly does. Players get called to the carpet. So do coaches, managers, executives, owners, and anyone associated with them. No one is safe.

A child is not an adult, a child didn’t ask to be here. Any man that doesn’t take care of his responsibilities to his family and to his children, do me a favor STOP calling yourself a man..at least have the decency to admit that you’re a boy. You don’t know what manhood is.

How much does Stephen A. Smith make per year?

Stephen A. Smith Net Worth

Smith’s net worth is estimated at $16 million.

Stephen A. Smith has added to his long list of controversial takes.

ESPN recently had to cut off Smith as he launched into his thoughts on the Israel-Palestine conflict, relating it to the situation in Hong Kong where protesters are fighting China’s rule.

First Take co-host Molly Qerim and Smith were wrapping up a discussion about Houston Rockets general manager Daryl Morey’s Twitter statement in support of the protesters and it’s potential harm to the NBA in China.

Smith said “Before we close, I would remind you that, throughout this world, one of the things that exist is the Israeli-Palestinian conflict. I don’t see folks outside the Jewish community talking about that too often.”

ESPN has tried to stay away from expressing political viewpoints and focusing on sports reporting. The network often sends out memos to employees warning them against making comments or taking actions that reflect negatively on the company.

On his show First Take in 2014, Smith claimed that women sometimes provoke domestic abuse. The comments were again in reference to the Ray Rice situation. Smith eventually apologized for his words on air. ESPN suspended Smith for a week for making the domestic violence comments.

The abrasive commentator called out the German women’s soccer team playing in the 2015 FIFA Women’s World Cup for giving up a goal because they “might not have wanted to mess their hair up.”

Check out Stephen A’s hot takes and observations on any of his social media accounts.

What’s next for Stephen A?

Paramount Animation and WWE Studios announced an upcoming animated wrestling movie to be released in the summer of 2020. “Rumble” features voice work from Will Arnett, Terry Crews, and Geraldine Viswanathan. Also featured is a cast of supporting WWE superstar voices and other celebrities, including sports commentator Stephen A. Smith.

Greg and Mike both write about sports for Sports Feel Good Stories.

You’re on Stephen A. Smith Bio, Net Worth, Quotes page.