Rising NFL star Patrick Mahomes’ net worth is climbing as fast as one of his fastball throws. The Kansas City Chiefs quarterback blew up the league in 2018 by passing for over 5,000 yards and 50 touchdowns, earning himself the league’s MVP trophy along the way.

On February 2, 2020, Mahomes was named MVP of Super Bowl LIV as he led the Chiefs to a comeback 31 – 20 victory over the San Francisco 49ers. At 24 years of age, he became the second-youngest QB ever to win a Super Bowl.

In his first three seasons of play, football experts had already begun claiming him to be the best quarterback in the NFL. His Super Bowl win adds another feather to his cap.

Estimated Net Worth: $10 Million.
(Estimate per a variety of Internet sources.)

Patrick Mahomes Salary from the Chiefs

Mahomes signed a four-year rookie contract in 2017 with the Kansas City Chiefs. The fully-guaranteed contract will pay him $16.4 million-plus a $10.1 million signing bonus and a $3.9 million roster bonus. The Chiefs hold an option for the fifth year, but it is likely that the team will offer him a juicy new contract before that ever happens.

Mahomes is one of the hottest rising stars in the NFL, and the Chiefs will want to lock in their young superstar for as long as possible. 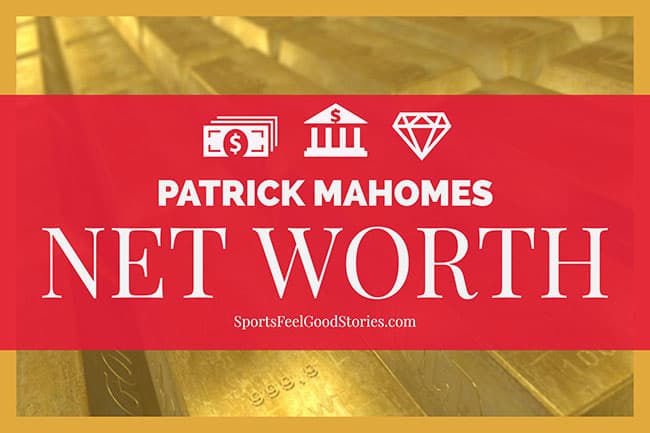 Mahomes’ breakout MVP season brought on many endorsement opportunities. The first deal he signed came from the ketchup-maker Hunts. Mahomes is well-known for his use of ketchup on just about anything he eats, including on his steaks.

From there the flood gates crashed open. He penned deals with sunglass-maker Oakley, shoe and sportswear manufacturer Adidas, and Goodcents Deli Fresh Subs.

In 2018 he became the first Chiefs player to ever appear on the cover of the Madden NFL series (Madden NFL 20).

Look for his 2020 Super Bowl win to lead to many more endorsements beyond Disney World. And, look for the Chiefs to try to sign him to a long-term contract that will greatly enhance his net worth.

The Chief’s quarterback has plenty of talent and notoriety to leverage. He’s begun to dip his toes into the world of fashion with his new branded-clothing line featuring his own logo. His online store Mahomes15.com features branded apparel and sportswear for all ages. In combination with his NFL salary, you can see why the Patrick Mahomes net worth scenario is looking very good.

According to football salary analysts, Mahomes could be in line to become the first $200 million dollar man in the history of the NFL. If he continues his trajectory established in his first full season, the Chiefs will back up the truck and make him the highest-paid quarterback ever.

The upside for Patrick Mahomes is immeasurable. He finished the 2018 season (his first full year) with a 12-4 record, taking the Chiefs all the way to the AFC Championship game. (The team lost to the eventual Super Bowl-winning New England Patriots.) He finished first in ESPN’s QBR quarterback passer rating and second in total passing yards with 5,097.

His popularity is rising to be amongst hottest in the NFL with his jersey sales ranking third overall behind only Tom Brady and Khalil Mack according to nflshop.com. With his youth, likability, and star quality, Mahomes ranks as one of the most marketable players in the league and his career has only just begun.

A salary of over $4 million per year is not too shabby, but relatively small in comparison to veteran QBs who have signed big deals per the NFL agreement.

Nicknames: Showtime, The Gunslinger, The Musician.

Video: How fast can Patrick Mahomes throw a football?

How Far Can Mahomes Throw a football?

On his pro day prior to the 2017 NFL draft, Patrick heaved the ball nearly 80 yards. Whoa!

Mahomes attended Whitehouse High School in Whitehouse, Texas, where he played football, baseball, and basketball. In football, he led the team to its first district title with a 12-1 record. Rivals, ESPN and 247 Sports rated him a three-star recruit coming out of his final year of high school.

Check out how another Texas high school QB has fared: Drew Brees Net Worth.

Where did Patrick Mahomes go to college? Mahomes played three seasons for Texas Tech before declaring he would enter the NFL Draft. As a freshman, he set the Big 12 record for passing yards (598) in a game. His play improved each year, finishing among the best in school history. He left his mark with NCAA records for single-game passing yards (734) and total offense yards (819) against Oklahoma in 2016.

The Kansas City Chiefs selected Patrick Mahomes in the 1st round of the 2017 NFL Draft. He was the #10 overall pick that year.

Mahomes will be eligible for free agency in 2021 (if the Chiefs decline to take fifth-year option).

Mahomes saw little action as the backup quarterback his freshman year with the Chiefs in 2017. But the next year, starting QB Alex Smith was dealt with the Washington Redskins. Mahomes took the reigns and never looked back.

His breakout season in 2018 led to numerous honors, including being named First-Team All-Pro and the NFL MVP. He finished the season playing in the 2019 Pro Bowl in Orlando, Florida.

Check out Red Zone Rick’s take on the top players in the AFC West. 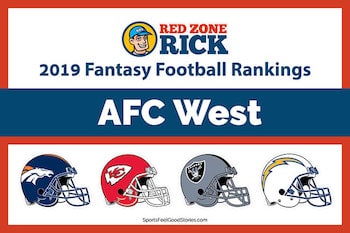 One of Mahomes’ calling cards as a quarterback is his ability to execute no-look passes with efficiency. Check out the NFL-N-Motion view of one of his no-look passes.

Mahomes is not married or engaged as of this writing.

Who is Patrick Mahomes Girlfriend?

Mahomes’ long-term girlfriend is soccer player Brittany Matthews, who he met in high school. As of now, no word on engagement or future plans for this couple.

She attended the University of Texas-Tyler and was a standout in soccer. In the 2016 season, she was named all-conference, All-West Region, ASC All-Tournament, and was twice named the player of the week.

Who are his Mother and Father?

His immediate family includes his mother Randi and his father Patrick. Patrick Mahomes’ father (Patrick Mahomes) played professional baseball. The senior Mahomes pitched for six different teams from 1992 to 2003. He finished his MLB career with a 42-39 record.

Does He Have Brothers and Sisters?

He has two siblings: brother Jackson and sister Mia.

“Mahomes’ talent is as good as anybody in the league now and has ever played the game. I think the kid will get nothing but better.”

“He gets the ball to all of his receivers quick, quick release, sees things quickly, can extend plays, got a great arm, got a fabulous arm, can throw the ball out of the stadium. He makes good decisions, accurate, gets the ball out on time.”

“Patrick Mahomes. Here’s a guy who’s the Kermit to my Miss Piggy <3.”

“Mahomes’ brilliance is hard to explain, even harder to exaggerate. He is bending the boundaries of what is plausible on the football field. Only Aaron Rodgers is able to match the first-year starter’s blend of athleticism, precision, and playmaking magic. Nobody has a more impressive arm than Mahomes.”

“Every week, Patrick Mahomes does a bunch of things that shouldn’t be possible for a human.”

1.) I just try to learn from every mistake that I make so that I never make them again.

2.) I love being able to come in every single day and work out and watch film and practice with guys who are all striving for the same goal.

4.) Every experience, good or bad, you have to learn from.

5.) I think the message for the whole team is we’re not satisfied with where we’re at. We wanted to put ourselves in this position, but at the same time, we know we still have a long way to go. We’re going to keep in that mentality the rest of this season and into the playoffs not being satisfied with just being here. We want to make sure we can go and win the big games whenever we need to.

6.) Just how to be a professional. [Alex is] a great pro, someone who gameplans week in and week out. He really loves this, and I’ll forever cherish the person that he is and he’ll be a great friend no matter what happens.
On Alex Smith

1.) The NFL star quarterback was also drafted by the Detroit Tigers in the 37th round of the 2014 Major League Baseball Draft, but he did not sign with the team.

2.) His dad gave him the nickname, “Showtime,” because he saw some flash in his son’s game.

3.) His favorite sport other than football is golf.

4.) Baker Mayfield and Patrick Mahomes went head-to-head in a record-setting college game. Mayfield and the Sooners won that day after putting up 66 points on the scoreboard. Mahomes and the Raiders only managed a measly 59 points.

4.) Mahomes has something in common with Kermit the Frog. Some of his teammates poke fun at him for having a “froggish” voice. Hear him explain it yourself in the following video.

The future is bright for this young football superstar on and off the field. In this article, we dig deeper into his rookie contract, endorsement deals, and future earnings potential.

Leading the Chiefs to their first Super Bowl win since 1969, Mahomes will likely profit from a huge new contract and many more endorsements. He has truly become the face of the new NFL as it enters its second century of existence.

Greg, a long-time Vikings fan, writes about football and sports. Mike is the editor and founder of Sports Feel Good Stories and a Kansas City Chiefs fan.

Johnny Robinson — A player with heart