What’s at stake in a family, pick-up game of touch football? Usually, just bragging rights. Or, maybe the stakes are higher, e.g., who has to do the dishes after the meal. Whatever the case, it’s important to enter into the game with a plan of attack.

Here are some strategies and tactics to help your team post a “W” and enjoy the spoils that come with victory. 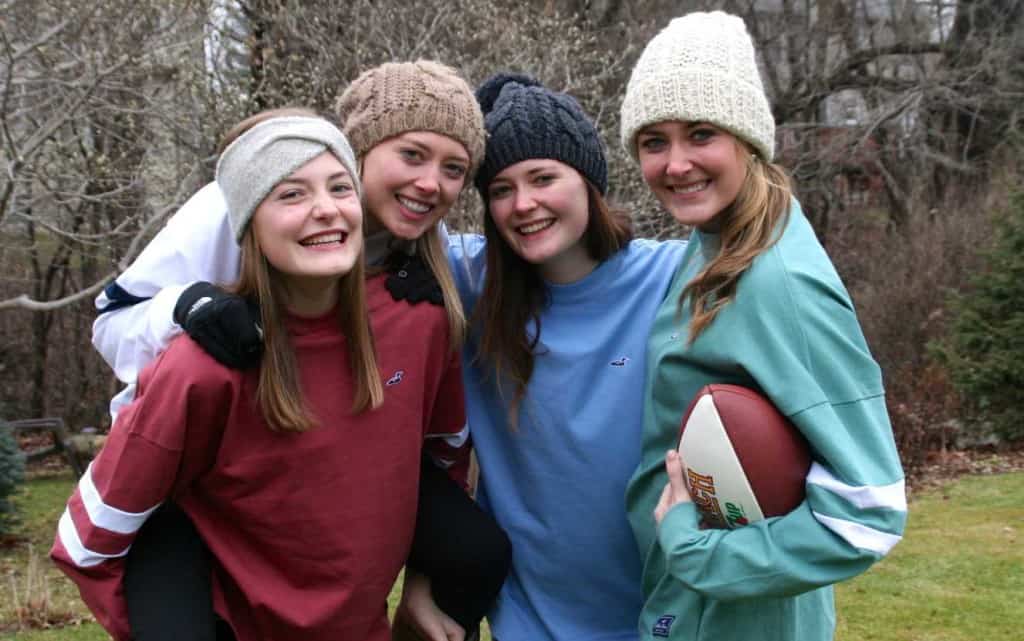 How to Win at Backyard Touch Football

Everyone knows that when you look good, you play well. In this case, players are outfitted with Cabin Crew jerseys from Great Lakes Clothing Company. The cotton jerseys, a collegiate take on women’s crew necks have an over-sized cut giving players plenty of room to stretch for those long passes. (Even if you don’t play football, they’re super comfy and warm).

On sunny days, don’t forget to add a little eye black under the eyes. Yeah, it might reduce some glare, but more importantly, it will help intimidate your opponents.

2.) Team selection is half the battle.

Lots to factor in here including speed, size, experience, sibling rivalry, hurt feelings, and more. As with NFL games, pick-up touch football is a quarterback league. Make sure you have a QB who can throw the ball on your team. After that, as tempting as it might be to draft for speed, go for players who have some experience playing football.

Things, like running routes and catching the ball, are difficult to teach in one session. The “best-athlete-available” direction is not a bad approach. Remember you won’t have time to administer a Wonderlic test, so try to pick players who are quick studies.

3.) Put the ball in your best player’s hands.

Reverses, laterals-and-then-forward-passes, and of course, the old hook-and-ladder plays should make up at least ½ of your offensive play calling. Also, you’re doing something wrong if a stop-and-go pass route isn’t called on 2 out of 5 pass plays.

5.) Take advantage of your field of play.

Try running the curl route around the maple tree. Or, make sure your defender has to run through every puddle or slippery spot on the field. Use the imperfections of your field of play to your team’s advantage.

On questionable pass receptions and “did the ball cross the end zone” issues, if you’re on offense, celebrate immediately as if the ball was caught or the ball crossed the line for a TD. An early, and loud celebration dampers any protest attempts by the other team.

In a short time, the outcome of the game will soon be forgotten, but memories of the experience will last a long time. Let everyone have a shot at quarterback who wants to, don’t take it too seriously and cheer good play from both squads.

If you’re looking for some creative plays, try some of these:

1.) The zig-zag pass route.  Have 2 players run in zig-zag patterns instructing both of them that the pass might come on the zig or the zag.

4.) The angle shotgun. The Center hikes it to a receiver who is standing a foot behind the line of scrimmage. The quarterback goes out for pass – they always forget to cover the QB – and receiver tosses the touchdown pass.

5.) The Hook-and-Ladder. Receiver A runs a 10-foot button hook.  Upon pass completion, receiver A laterals the ball to teammate B who is sprinting to the goal line within the lateral range.

6.) The Statue of Liberty play. The quarterback takes the ball back as if to pass, and holds it there for a receiver or back to come around, take the ball and run.

7.) The Hail Mary. Everyone goes long and the QB throws it far and high. See Doug Flutie’s pass against Miami in 1984 to fine-tune your approach.

Mike is the founder and editor of Sports Feel Good Stories. He has also been a contributing writer for USA Football.

Puns and Jokes for Football and Super Bowl (Instagrammable)