Eagles fans, and really all football fans, will appreciate the number, quality, and diversity of the collection of monikers we’ve assembled. It’s been updated since the 2018 fantasy football season.

The world champion Philadelphia Eagles are poised to make another run at the title this year. DeSean Jackson is heading back to the team where he began his career. The exciting receiver is sure to provide a new deep threat ability to Carson Wentz’s already powerful arsenal. Fly Eagles Fly!

We lead off with our expert panel’s* – see expert panel makeup below article – Top 12 name selections. 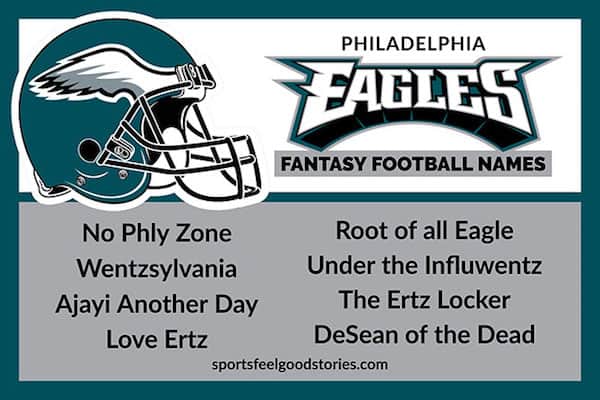 Wentz It Rains It Pours.

From Wentz You Came.

Wentz All The Way.

You Only Live Wentz.

The Devil Wentz Down To Georgia.

From Wentz He Sprang.

The Wentz and Future King.

Wentz Upon a Time.

DeSean of the Dead.

Ooh, Heaven is a Place on Ertz.

So Good it Ertz.

Hit ‘Em Where It Ertz.

Take a Chance On Me.

Stay In Your Lane.

Ace In The Sproles.

Burning a Sproles In My Pocket.

Check out the Eagles in the Pro Football Hall of Fame

Separate the Wheaton From the Chaff.

Kelce it to Believe it.

Mack to the Future.

Head in the McClouds..

May the Schwartz Be With You

You Got To Know When To Foles Em.

Nobody Likes Us, We Don’t Care.

The History of Fantasy Football Naming

While the popularity of fantasy football has surged in the past decade, it still seems to be a fairly recent phenomenon. However, the pastime can be traced back all the way to 1962, when a limited owner of the Oakland Raiders named Wilfred “Bill the Gill” Winkenbach developed a system and rule book for play.

With the help of Bill Tunnel, the Raiders PR man, and Scotty Stirling, a Tribune reporter, this system became the basis for the modern-day play. The first draft occurred in 1963, and an educated guess suggests that this was when the first fantasy football naming took place.

So, the naming of fantasy football teams dates back some 56 years! And, you can thank Bill the Gill for it.

Q: When was the Eagles’ first Super Bowl appearance?
A: The team played the Oakland Raiders in Super Bowl XV in 1981, losing 27-10.

Q: What was Reggie White’s jersey number with the Eagles?
A: #92