You are here: Home / Sports / Face Your Fear Quotes and Be Brave

These fear quotes will help you face your biggest worries and be brave. Being afraid doesn’t have to be an obstacle. Rather, it can be your greatest weapon in achieving success. Success and great achievement lie on the other side of being afraid.

Determine the biggest obstacles that you are afraid of and work hard to overcome them. There is no other way around it. Look for inspiration to address your trepidation in the collection of quotations below.

2.) Do the thing you fear and the death of fear is certain.
Ralph Waldo Emerson

3.) Show me a guy who’s afraid to look bad, and I’ll show you a guy you can beat every time.
Lou Brock

4.) Feel the fear and do it anyway!
Susan Jeffers

6.) I’m not afraid to die – it’s just that I had so much left to do in this world.
Vince Lombardi – More Lombardi Sayings

7.) Avoiding danger is no safer in the long run than outright exposure. The fearful are caught as often as the bold.
Helen Keller 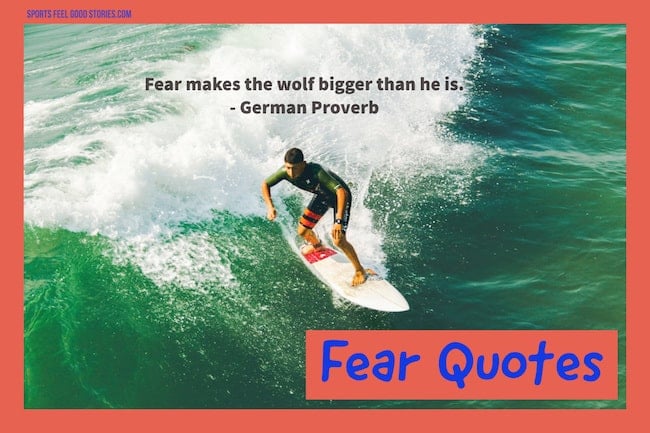 9.) The beautiful thing about fear is, when you run to it, it runs away.
Robin Sharma

10.) I have no fear of anybody or anything happening to me in WWE because nothing can be as bad as some of the injuries I went through and some of the grotesque things that have happened to my body.
Dean Ambrose

11.) People say to me all the time, ‘You have no fear.’ I tell them, ‘No, that’s not true. I’m scared all the time. You have to have fear in order to have courage. I’m a courageous person because I’m a scared person.’
Ronda Rousey

12.) Don’t let your fears keep you mired in the crowd. Abolish your fears and raise your commitment level to the point of no return, and I guarantee you that the Champion Within will burst forth to propel you toward victory.
Bruce Jenner

13.) He who is not courageous enough to take risks will accomplish nothing in life.
Muhammad Ali – More Quotations from The Greatest 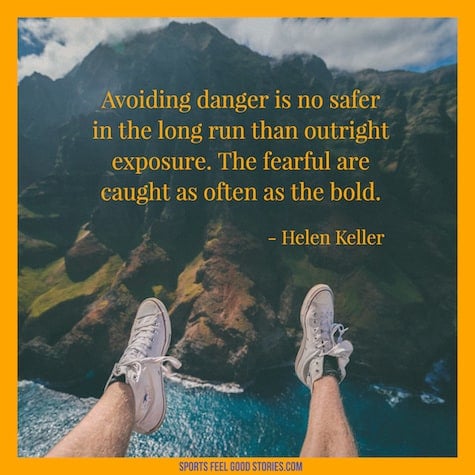 15.) You gain strength, courage, and confidence by every experience in which you really stop to look fear in the face. You are able to say to yourself, ‘I lived through this horror. I can take the next thing that comes along.’
Eleanor Roosevelt

16.) Never let the fear of striking out, keep you from playing the game.
Babe Ruth – More from Babe on Baseball and Life

17.) Fear is part of the process. If you weren’t scared, you’d be in trouble.
Bruce Jenner

18.) There was never any fear for me, no fear of failure. If I miss a shot, so what?
Michael Jordan 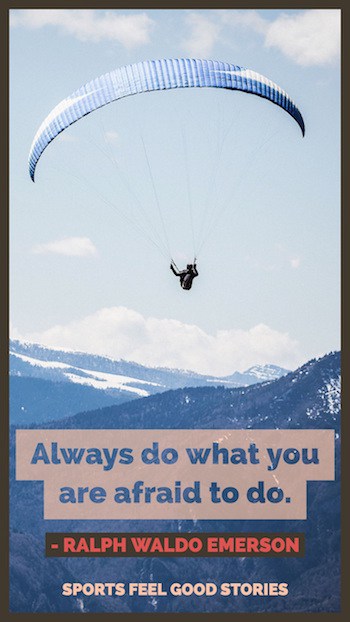 20.) Our deepest fear is not that we are weak. Our deepest fear is that we are powerful beyond measure. It is our light, not our darkness that most frightens us. We ask ourselves, who am I to be brilliant, gorgeous, talented, fabulous? Actually, who are you not to be? You are a child of God. Your playing small does not serve the world … As we are liberated from our own fear, our presence automatically liberates others.
Nelson Mandela

21.) Fear is the path to the dark side. Fear leads to anger. Anger leads to hate. Hate leads to suffering.
Yoda 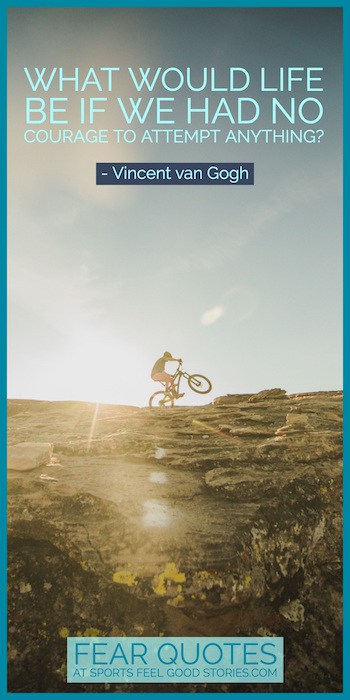 22.) If you are afraid of failure you don’t deserve to be successful.
Charles Barkley

24.) Inaction breeds doubt and fear. Action breeds confidence and courage. If you want to conquer fear, do not sit home and think about it. Go out and get busy.
Dale Carnegie

25.) I’d rather be two strokes ahead going into the last day than two strokes behind. Having said that, it’s probably easier to win coming from behind. There is no fear of chasing. There is a fear of being chased.
Jack Nicklaus

26.) Nothing in life is to be feared, it is only to be understood. Now is the time to understand more, so that we may fear less.
Marie Curie

27.) Those who dare to fail miserably can achieve greatly.
John F. Kennedy

29.) You must do the thing you think you cannot do.
Eleanor Roosevelt

30.) I try to show that I have no fear. When you grow up hungry, you’re not afraid of anything.
Angel Cabrera

31.) I know fear is an obstacle for some people, but it is an illusion to me… Failure always made me try harder next time.
Michael Jordan

32.) I don’t want to wake up and be bored. That’s probably my greatest fear is to have nothing to do.
Tom Brady – More from Tom Terrific

33.) Obstacles don’t have to stop you. If you run into a wall, don’t turn around and give up. Figure out how to climb it, go through it, or work around it.
Michael Jordan

A coach should never be afraid to ask questions of anyone he could learn from.
Bobby Knight

I was scared to death, but I made fear score points for me. I’m going to take the fear and use it to my advantage.
Bruce Jenner

Andy is a sportswriter living in St. Paul, Minnesota.

You’re on the Face Your Fear Quotes and Be Brave page.