The elusive running back had a breakout rookie season, achieving several team records including rushing attempts (242), 100-yard rushing games for a rookie (6) and rushing yards against one opponent as a rookie (327 vs. Chargers).

The Kareem of the Crop. 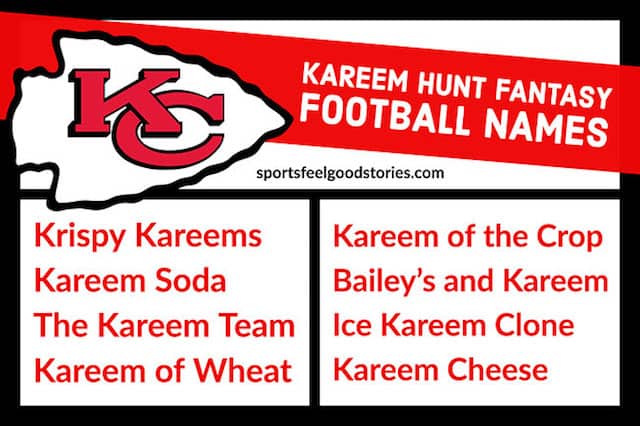 Funny, Clever and Good Nicknames for Your League

Kareem of the Crop.

We All Scream for Ice Kareem.

Hunt played high school football at South High School in Willoughby, Ohio. He rushed for an impressive 2,519 yards and 39 touchdowns as a junior, and finished his senior year with an even better 2,685 yards and 44 touchdowns!

He attended the University of Toledo, where he shattered Chester Taylor’s school record for career rushing yards (4,945). In addition, Hunt achieved new school records for yards per rush (6.3) and total yards from scrimmage (5,500).

Hunt was a third-round pick by the Kansas City Chiefs in the 2017 NFL Draft.

He started his professional career with a bang, becoming the first player in NFL history to score a 50 yard or longer touchdown in each of his first three games of his career.

Hunt went on to etch his name in the record books again with six consecutive games of 100+ scrimmage yards to start a rookie season.