You are here: Home / Motivational Quotes for Athletes

Motivational quotes for athletes have long been a way to provide that little extra inspiration for top performance.

They say its 1% inspiration and 99% perspiration – but that 1% can go a long way. You cannot achieve anything big as an athlete if you are not motivated 100%. Ask any successful athlete and they will tell you that it’s all in the head. Preparation and hard work are critical, but it all starts with motivation. It is the fuel that drives a performer to achieve great things and the same principles apply to life too.

So whether you are a young athlete, an old vet, or an accomplished performer in any other pursuit, being motivated is critical. Here are some of the best motivation quotes for athletes and everyone else to boost their confidence and to inspire them to achieve greater heights in their careers and life.

Talent is never enough. With few exceptions, the best players are the hardest workers.
Magic Johnson

Never give up, never give in, and when the upper hand is ours, may we have the ability to handle the win with the dignity that we absorbed the loss.
Doug Williams 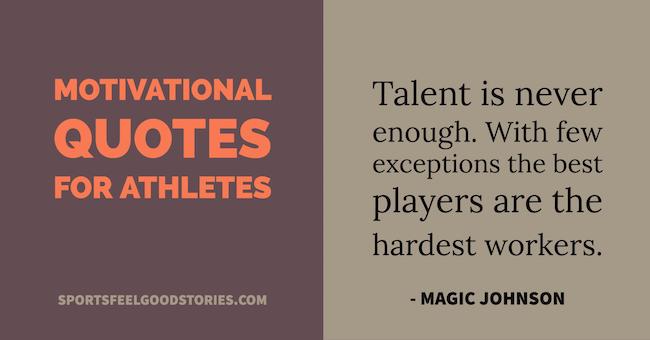 Most people give up just when they’re about to achieve success. They quit on the one-yard line. They give up at the last minute of the game one foot from a winning touchdown.
Ross Perot

Set your goals high, and don’t stop till you get there.
Bo Jackson

The five S’s of sports training are stamina, speed, strength, skill, and spirit; but the greatest of these is spirit.
Ken Doherty

Most people never run far enough on their first wind to find out they’ve got a second.
William James

What makes something special is not just what you have to gain, but what you feel there is to lose.
Andre Agassi

You find that you have peace of mind and can enjoy yourself, get more sleep, and rest when you know that it was a one hundred percent effort that you gave–win or lose.
Gordie Howe

Number one is just to gain a passion for running. To love the morning, to love the trail, to love the pace on the track. And if some kid gets really good at it, that’s cool too.
Pat Tyson

Ability may get you to the top, but it takes character to keep you there.
John Wooden

The harder you work, the harder it is to surrender.
Vince Lombardi

I believe in myself.
Muhammad Ali

If you want to find the real competition, just look in the mirror. After a while you’ll see your rivals scrambling for second place.
Criss Jami

Nobody can make you feel inferior without your consent.
Eleanor Roosevelt

Adversity causes some to break; others to break records.
William Ward

Your attitude, not your aptitude, will determine your altitude.
Zig Ziglar

To be prepared is half the victory.
Miguel Cervantes

I will keep smiling, be positive and never give up! I will give 100 percent each time I play. These are always my goals and my attitude.
Yani Tseng

I am the greatest. I said that before I knew I was.
Muhammad Ali

Check out The YMCA’s Contribution to Sports

Shoot for the Stars Sayings

You will face your greatest opposition when you are closest to your biggest miracle.
Shannon L. Alder

If you accept the expectations of others, especially negative ones, then you’ll never change the outcome.
Michael Jordan

A year from now you may wish you had started today.
Karen Lamb

Show me a guy who’s afraid to look bad, and I’ll show you a guy you can beat every time.
Lou Brock

If plan A doesn’t work, the alphabet has 25 more letters – 204 if you’re in Japan.
Claire Cook

If you push me towards a weakness, I will turn that weakness into a strength.
Michael Jordan

It’s hard to beat a person who never gives up.
Babe Ruth

When you’ve got something to prove, there’s nothing greater than a challenge.
Terry Bradshaw

Always make a total effort, even when the odds are against you.
Arnold Palmer

I have failed many times, but I have never gone into a game expecting myself to fail.
Michael Jordan

The harder the battle, the sweeter the victory.
Les Brown

The difference between the impossible and the possible lies in a person’s determination.
Tommy Lasorda

If it doesn’t challenge you, it won’t change you.
Fred Devito

Push yourself again and again. Don’t give an inch until the final buzzer sounds.
Larry Bird

Sportsmanship for me is when a guy walks off the court and you really can’t tell whether he won or lost, when he carries himself with pride either way.
Jim Courier

If you can’t outplay them, outwork them.
Ben Hogan

If you fail to prepare, you’re prepared to fail.
Mark Spitz

I’ve got a theory that if you give 100% all of the time, somehow things will work out in the end.
Larry Bird

Winning isn’t everything, but wanting to win is.
Vince Lombardi

I don’t think being an athlete is unfeminine. I think of it as a kind of grace.
Jackie Joyner-Kersee

Do you know what my favorite part of the game is? The opportunity to play.
Mike Singletary

The wishbone will never replace the backbone.
Will Henry

You were born to be a player. You were meant to be here. This moment is yours.
Herb Brooks

Good, better, best. Never let it rest. Until your good is better and your better is best.
Tim Duncan

If one can stick to the training throughout the many long years, then willpower is no longer a problem. It’s raining? That doesn’t matter. I am tired? That’s beside the point. It’s simply that I just have to.
Emil Zatopek

If at first, you don’t succeed, you are running about average.
M.H. Alderson

The more difficult the victory, the greater the happiness in winning.
Pele

I am building a fire, and every day I train, I add more fuel. At just the right moment, I light the match.
Mia Hamm

I can accept failure, everyone fails at something. But I cannot accept not trying.
Michael Jordan

In the end, it’s the extra effort that separates a winner from second place. It takes desire, determination, discipline, and self-sacrifice. Put all these together, and even if you don’t win, how can you lose?
Jesse Owens

Continuous effort — not strength or intelligence — is the key to unlocking our potential.
Liane Cardes

You are never really playing an opponent. You are playing yourself, your own highest standards, and when you reach your limits, that is real joy.
Arthur Ashe

If you are afraid of failure you don’t deserve to be successful!
Charles Barkley

You can’t get much done in life if you only work on the days when you feel good.
Jerry West

Nobody who ever gave his best regretted it.
George Halas – Learn more about the Chicago Bears.

If you aren’t going all the way, why go at all?
Joe Namath

Today I will do what others won’t, so tomorrow I can accomplish what others can’t.
Jerry Rice

What to do with a mistake: recognize it, admit it, learn from it, forget it.
Dean Smith

If you can believe it, the mind can achieve it.
Ronnie Lott

Only a man who knows what it is like to be defeated can reach down to the bottom of his soul and come up with the extra ounce of power it takes to win when the match is even.
Muhammad Ali

There are only two options regarding commitment. You’re either IN or you’re OUT. There is no such thing as life in-between.
Pat Riley

Mike is an author and publisher of Sports Feel Good Stories.

If you have any suggestions for additions to motivational quotes for athletes, please use the Contact page and let us know. Thanks!