These funny basketball quotes are a quick fun read for your hoops and humor fix. From Charles Barkley to Daryl Dawkins, we’ve got you covered.

And, check out our basketball smack-talk suggestions at the bottom of the page — worthy of a chuckle or two. Enjoy!

1.) I haven’t been able to slam-dunk the basketball for the past five years. Or, for the thirty-eight years before that, either.
Dave Barry

2.) When I dunk, I put something on it. I want the ball to hit the floor before I do.
Darryl Dawkins

3.) Winning is like deodorant – it comes up and a lot of things don’t stink.
Doc Rivers

4.) There are really only two plays: Romeo and Juliet, and put the darn ball in the basket.
Abe Lemmons

6.) He makes plays you can’t coach, and he makes plays that look like he’s never been coached.
Bill Self comment on point guard Tyshawn Taylor 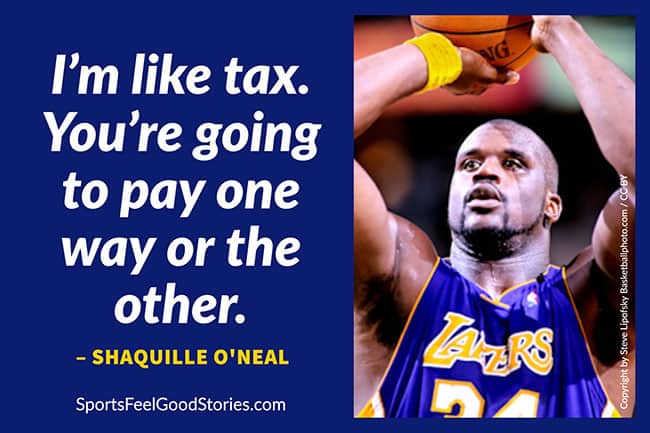 7.) All I know is, as long as I led the Southeastern Conference in scoring, my grades would be fine.
Charles Barkley

8.) You got to believe in yourself. Hell, I believe I’m the best-looking guy in the world and I might be right.
Charles Barkley

9.) I always laugh when people ask me about rebounding techniques. I’ve got a technique. It’s called just go get the damn ball.
Charles Barkley

10.) Kids are great. That’s one of the best things about our business, all the kids you get to meet. It’s a shame they have to grow up to be regular people and come to the games and call you names.
Charles Barkley

11.) Yeah, Ernie, its called defense, I mean I wouldn’t know anything about it personally but I’ve heard about it through the grapevine.
Charles Barkley

12.) You got to believe in yourself. Hell, I believe I’m the best-looking guy in the world and I might be right.
Charles Barkley

13.) Don’t call me son unless you’re going to include me in your will. (When Adolph Rupp called him, “Son.”)
Al McGuire

14.) Winning is overrated. The only time it is really important is in surgery and war.
Al McGuire

15.) A team should be an extension of a coach’s personality. My teams are arrogant and obnoxious.
Al McGuire

16.) The only mystery in life is why kamikaze pilots wore helmets.
Al McGuire

19.) If the waitress has dirty ankles, the chili is good.
Al McGuire

20.) When I went to Catholic high school in Philadelphia, we just had one coach for football and basketball. He took all of us who turned out and had us run through a forest. The ones who ran into the trees were on the football team.
George Raveling

21.) Fans never fall asleep at our games, because they’re afraid they might get hit by a pass.
George Raveling

22.) I know the Virginia players are smart because you need 1500 SAT to get in. I have to drop bread crumbs to get our players to and from class.
George Raveling

23.) I hate it. It looks like a stickup at 7-Eleven. Five guys standing there with their hands in the air.
Norm Sloan, commenting on zone defense 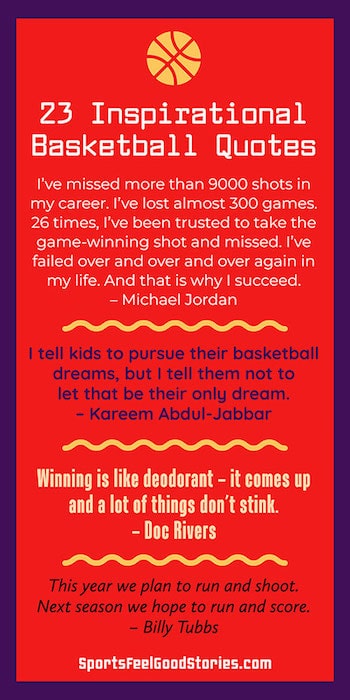 25.) The secret is to have eight great players and four others who will cheer like crazy.
Jerry Tarkanian

26.) They shot the ball well early. What comes out of the microwave hot doesn’t always stay hot. I know, because I eat bagels in the morning.
Shaquille O’Neal

27.) This year we plan to run and shoot. Next season we hope to run and score.
Billy Tubbs

28.) I liked the choreography, but I didn’t care for the costumes.
Tommy Tune, on why he doesn’t play basketball

29.) Any American boy can be a basketball star if he grows up, up, up.
Bill Vaughn

30.) We are in the trophy generation. Give them a trophy for 23rd place. That makes the parents happy.
Tom Izzo

31.) Basketball is like photography. If you don’t focus, you’ll only get negative.
Dan Frisby

32.) Our offense is like the Pythagorean Theorem. There is no answer.
Shaquille O’Neal

34.) A tough day at the office is even tougher when your office contains spectator seating.
Nik Posa

35.) You can say something to popes, presidents and kings, but you can’t talk to officials. In the next war, they ought to give everyone a whistle.
Abe Lemmons

36.) Scoring 100 points is a lot, but I maybe could have scored 140 if they had played straight-up basketball.
Wilt Chamberlain

38.) I knew I was dog meat. Luckily, I’m the high-priced dog meat that everybody wants. I’m the good-quality dog meat. I’m the Alpo of the NBA.
Shaquille O’Neal

39.) There are really only two plays: Romeo and Juliet, and put the darn ball in the basket.
Abe Lemmons

40.) If you meet the Buddha in the lane, feed him the ball.
Phil Jackson

41.) The other side of this is that a good man has been liberated.
Rick Carlisle, on the firing of coach David Blatt

42.) I really appreciate this award, but I don’t want to win it ever again.
Marcus Denmon, after receiving the Sixth Man Award for the Missouri Tigers

43.) In my prime, I could’ve handled Michael Jordan. Of course, he would have only been 12 years old.
Jerry Sloan

44.) This is basketball, not figure skating. You don’t get extra points for degree of difficulty.
Bobby Hurley

45.) I want us to play mother-in-law defense: constant nagging and harassment.
Rick Pitino

46.) I haven’t been able to slam-dunk the basketball for the past five years. Or, for the thirty-eight years before that, either.
Dave Barry

47.) If you make every game a life and death proposition, you’re going to have problems. For one thing, you’ll be dead a lot.
Dean Smith

48.) They say that nobody is perfect. Then they tell you practice makes perfect. I wish they’d make up their minds.
Wilt Chamberlain

49.) If you can walk with your head in the clouds and keep your feet on the ground, you can make it in the NBA.
Gary Dornhoefer

50.) Me shooting 40 percent from the free-throw line is God’s way of saying that nobody is perfect.
Shaquille O’Neal

So, you have a few favorite funny basketball quotes in your library now. How can you use them? Well, try these options on for size:

B.) Include a few favorites in emails to your basketball team.

C.) Try a good one for a sign or poster.

What to yell at a basketball game — Smack talk

First of all, if you’re a parent, the overwhelming amount of research suggests that kids want a silent presence at games. Attend the game, appreciate good play from all players, but don’t yell at the refs, the coach, or the players.

But, for other games, or if you’re just talking smack with adult friends during a pick-up game, try these on for size:

a.) I’ve seen more bricks here than at a construction site.
b.) Pack your suitcase because that’s traveling.
c.) There’s always a need for bricklayers.

d.) You must be from Sweden because you got no Finnish.
e.) Hit the showers, your game stinks.
f.) All-day, baby!

j.) Heat check — If you’ve made at least two shots in a row.
k.) Call the cops ’cause you were robbed — When you steal the ball.
l.) That’s too much space — Yes, your defender will hate you.

Mike has coached basketball for some 15 years, written three books on the game of basketball, and is editor of Sports Feel Good Stories.