You are here: Home / Basketball Quotes for Girls

Our basketball quotes for girls include insights from famous players and coaches from colleges and the pro ranks.

1.) It’s harder to stay on top than it is to climb. Continue to seek new goals.
Pat Summitt

2.) Coming in every day and walking the walk. That is what you want to do as a leader.
Maya Moore

3.) I think it’s great that young girls have the WNBA to look up to now.
Candace Parker

4.) Be strong in body, clean in mind, lofty in ideals.
James Naismith

5.) It’s not all about shooting. That’s such a small part of my game, but that’s what people focus on the most. I just try to do the little things.
Diana Taurasi 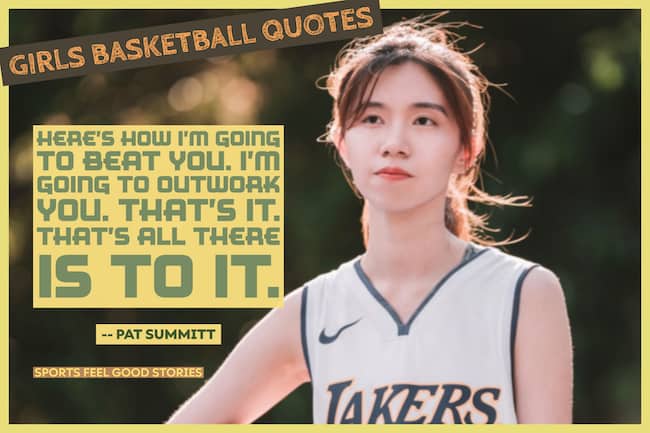 9.) When I was a young playing basketball, WNBA was a dream.
Nia Jax

10.) Empower the people around you, from the janitor to the athletic director. You do that by being sincere, caring about others, and then putting it into practice.
Sue Gunter

12.) Coaches shouldn’t have to push you to work hard, you should push yourself to work hard because you want to be a great player.
Bob Knight

13.) Discover your gift, develop your gift, and then give it away every day.
Don Meyer

14.) Love is the force that ignites the spirit and binds teams together.
Phil Jackson

16.) There can only be one state of mind as you approach any profound test; total concentration, a spirit of togetherness, and strength.
Pat Riley

17.) Everybody’s talking trash these days, so why not keep quiet?
Dennis Rodman

18.) I urge all of you, all of you, to enjoy your life, the precious moments you have. To spend each day with some laughter and some thought, to get your emotions going.
Jimmy Valvano 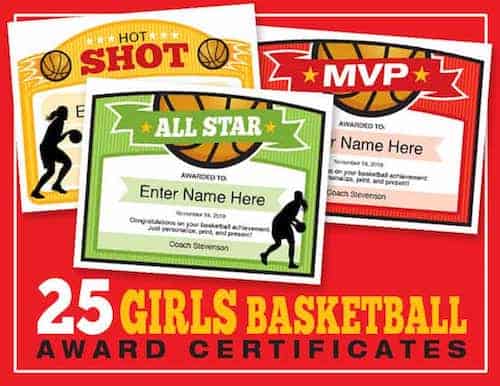 19.) With the absence of pressure, it’s hard to do great things.
Geno Auriemma

20.) Simplify the game as much as possible. When you add, you must subtract.
Don Meyer

21.) Attitude is a choice. What you think you can do, whether positive or negative, confidence or scared will most likely happen.
Pat Summitt

23.) Whether its college or the NBA, its basketball and the more you play the less you need to adjust.
Diana Taurasi

24.) You don’t have to be Magic to be special. You’re already special, you’re you.
Magic Johnson
25.) Everyone talks about age, but it’s not about age. It’s about work ethic. Winning never gets old. 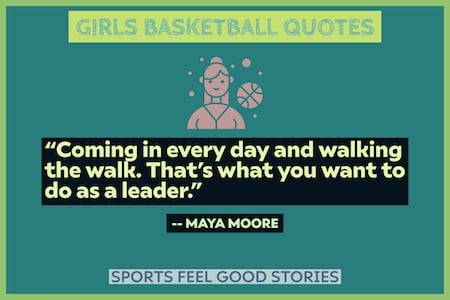 26.) It’s about doing it in a way that it can’t be done any better. That is the goal every day.
Geno Auriemma

27.) Talent is God-given. Be humble. Fame is man-given. Be grateful. Conceit is self-given. Be careful.
John Wooden

29.) When you work on getting better at something, don’t do it half speed.
Ray Allen

31.) Evaluate wins and losses objectively, focusing more on effort and execution than on the outcome of the game.
Morgan Wootten

32.) Teams that play together beat those with superior players who play more as individuals.
Jack Ramsay

33.) Help one kid at a time. He’ll maybe go back and help a few more.
Al McGuire

34.) Bottom line, you’re either a risk taker or you’re not, and if you don’t take risks, you’ll never win big.
Geno Auriemma

36.) Don’t act like you’re too good to use other ideas.
Hubie Brown

38.) I learn more from the WNBA. They know how to dribble, how to pivot, how to use the shot fake.
Draymond Green

39.) To be successful, you have to expose yourself to different situations – different styles of play, different teammates, and different coaching.
Sue Bird 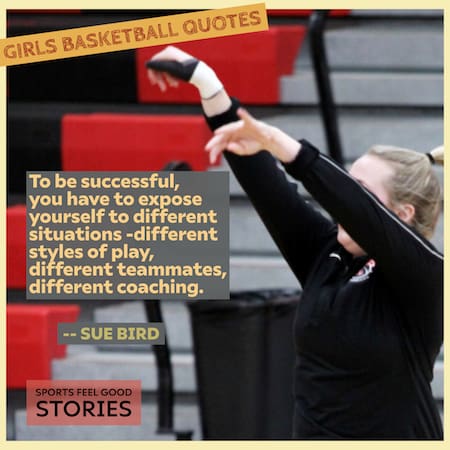 41.) Every day that you wake up, you have one job and that is getting better.
Derrick Rose

42.) The more your players have to think on the basketball court, the slower their feet get.
Jerry Tarkanian

43.) Morale and attitude are the fundamentals of success.
Bud Wilkinson

44.) Winning is like deodorant – it comes up and a lot of things don’t stink.
Doc Rivers

45.) My relationship with Northeast Ohio is bigger than basketball. I didn’t realize that four years ago. I do now.
LeBron James

48.) If you look up the definition of greatness in a dictionary, it will say Michael Jordan.
Elgin Baylor

51.) The only important statistic is the final score.
Bill Russell

52.) I want to do for rebounds what Michael Jordan did for dunks.
Dennis Rodman

54.) Winning is the first priority. Individual development is important, but if each guy gets better, the team gets better
Lawrence Frank

55.) One of the hardest things a player must learn to do is when to start a dribble and when to stop a dribble.
John Thompson

56.) Praise your kids. Inspire and motivate your players with praise. Ten years from now it won’t matter what your record was. Will your kids love you or hate you?
Jim Harrick

57.) If a team cannot perform with excellence at a moment’s notice, they will probably fail in the long run.
Mike Krzyzewski

58.) Other people go to the office, I get to coach. I know I’ve been blessed.
Jimmy Valvano

59.) I continually stress to all my players that all I expect from them at practice and in games is their maximum effort.
John Wooden

61.) We want men here, not just players. Players are a dime a dozen.
Tom Izzo

62.) You’ve got to get toughness and a level of basketball IQ that matchup because that’s what the best teams have.
Tom Crean

63.) For me, being tall was very positive because I thought my mom was the most beautiful person ever.

64.) Not talking on the floor is the least recognized form of selfishness but maybe the most dangerous to your team having success.
Tom Crean

65.) Bottom line – if you want success of any kind; you have to be comfortable being uncomfortable.
Tim Grover

66.) Champions play as they practice. Create a consistency of excellence in all your habits.
Mike Krzyzewski

68.) Basketball, in America, is like a culture.
Yao Ming

69.) I don’t need too much. Glamour and all that stuff don’t excite me. I am just glad to have a game of basketball in my life.
LeBron James

70.) It’s not to hurt anyone, but basketball can be rough.
Sue Wicks

71.) My goal is to win the next game one possession at a time. That’s it. I don’t have any other goals.
Brad Stevens

72.) My father gave me the greatest gift anyone could give another person, he believed in me.
Jim Valvano

73.) A winner is someone who recognizes his God-given talents, works his tail off to develop them into skills, and uses these skills to accomplish his goals.
Larry Bird

74.) I gave everything I had to basketball. The passion is still there, but the desire to play is not. It was a great ride.
Allen Iverson

76.) To inspire the players, I adapted a quote from Walt Whitman and taped it on their lockers before the first game of the playoffs, against the Miami Heat. ‘Henceforth we seek not good fortune, we are ourselves good fortune’.
Phil Jackson

77.) My attitude is that if you push me towards something that you think is a weakness, then I will turn that perceived weakness into a strength.
Michael Jordan

78.) I’ve never lost a game, I just ran out of time.
Michael Jordan

79.) If every basketball player worked as hard as I did, I’d be out of a job.
Steve Nash

80.) Everything is habit-forming, so make sure what you do is what you want to be doing.”
Wilt Chamberlain

81.) If a farmer and his family can get up at 5:30 every morning to milk cows, surely we can get up at that time to practice basketball.
Don Meyer

82.) I made a ridiculous statement when I first went to North Carolina State. I said I know basketball down there was like life or death. It was very wrong. It’s more important.
Jimmy Valvano

83.) Be a dreamer. If you don’t know how to dream, you’re dead.
Jimmy Valvano

84.) No matter what business you’re in, you can’t run in place or you’re going to be passed up by someone.
Jimmy Valvano

85.) You can’t concentrate on the misses. If you get good shots, you’ve got to take them. If you don’t, you hurt the team.
Diana Taurasi

86.) It’s strange not to be a part of an (NBA) organization or part of a team. I’m not joking with anybody on the bus like I usually do. But waking up with my back, knees, and ankles hurting – that’s not stuff I’m going to miss much.
Cheryl Miller

87.) We have unfinished business.
Sabrin Ionescu

Putting Basketball Quotes To Use

Ok, you’ve found some quotes that you really like, how do you use them? Well, here are some ideas:

A.) Include them as boilerplate text on each of your emails to your basketball team or hoops friends.
B.) Make a poster or sign with your favorite quote.
C.) Include them in a basketball team program.
D.) If you’re coaching, repeat a favorite quotation and ask players what it means to them at practice.
E.) Caption a team photo for Instagram or Facebook with one of the sayings.

Tom is a sportswriter living in St. Paul, Minnesota.

You’re on the Basketball Quotes for Girls page.