Soccer quotes for coaches, parents, players, and fans can be fun and inspiring to read. Maybe you’re a coach trying to find the right words to inspire your soccer team?

These quotes can serve as great motivation to fans, athletes and coaches of all ages. Even if the beautiful game isn’t your favorite sport, you’ll get a kick out of these sayings.

Up to five goals is journalism. After that, it becomes statistics.
Author Unknown

Whatever brings you down will eventually make you stronger.
Alex Morgan

Raise the bar a little higher each time you succeed.
Mia Hamm

I don’t believe skill was, or ever will be, the result of coaches. It is the result of a love affair between the child and the ball.
Roy Maurice Keane

Concerning football playing, I protest to you it may rather be called a friendly kind of fighting, rather than recreation.
Author Unknown

I get a kick out of this game.
Author Unknown

Why is there only one ball for 22 players? If you gave a ball to each of them, they’d stop fighting for it.
Author Unknown

Five days shalt thou labor, as the Bible says. The seventh day is the Lord thy God’s. The sixth day is for football.
Anthony Burgess

To watch people push themselves further than they think they can, it’s a beautiful thing.
Abby Wambach

Excuses are like losses. Everybody has them except the champions.
Alex Morgan 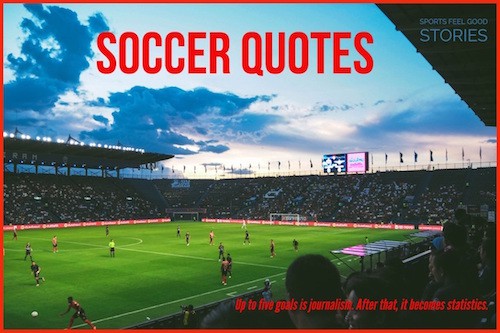 Some people tell me that professional players are soccer slaves. Well, if this is slavery, give me a life sentence.
Bobby Charlton

Ally MacLeod thinks that tactics are a new kind of mint.
Billy Connolly

I think foosball is a combination of soccer and shish kabobs.
Mitch Hedberg

Foosball screwed up my perception of soccer. I thought you had to kick the ball and then spin around and around. I can’t do a backflip, much less several simultaneously with two other guys.
Mitch Hedberg

That was in the past, we’re in the future now.
David Beckham

It’s impossible to make a bad pass when you don’t pass.
Unknown

Check out our 2018 World Cup Guide with Stars, Favorites and Fun Facts.

Soccer is not about justice. It’s a drama, and criminally wrong decisions against you are part and parcel of that.
Pete Davies

Most of us are in this more than just for playing soccer. We’re in it for the bigger goal — to move it along for the next generation.
Landon Donavon

The vision of a champion is someone who is bent over, drenched in sweat, at the point of exhaustion, when no one else is watching.
Anson Dorrance

Those who say it can’t be done, shouldn’t interfere with those who are doing it.
Billy Eberhart

To the aesthete, it is an art form, an athletic ballet. To the spiritually inclined it is a religion.
Paul Gardner

The goalkeeper is the jewel in the crown and getting at him should be almost impossible. It’s the biggest sin in football to make him do any work.
George Graham

Failure happens all the time. It happens every day in practice. What makes you better is how you react to it.
Mia Hamm

I am building a fire, and every day I train, I add more fuel. At just the right moment, I light the match.
Mia Hamm

I am a member of a team, and I rely on the team, I defer to it and sacrifice for it, because the team, not the individual, is the ultimate champion.
Mia Hamm

Many people say I’m the best women’s soccer player in the world. I don’t think so. And because of that, someday I just might be.
Mia Hamm

A goalkeeper can’t win a game, she can only save it.
Unknown 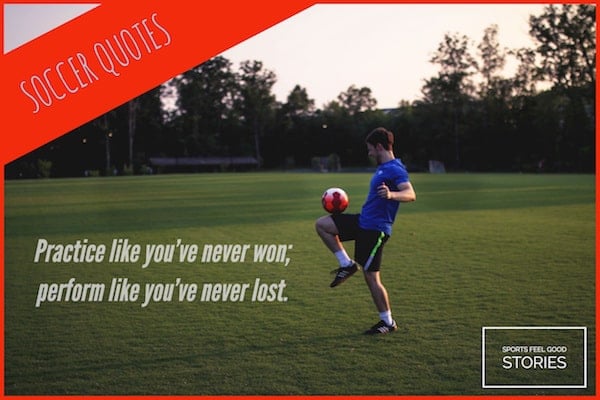 (and this isn’t American Football)


Football is the opera of the people.
Stafford Heginbotham

All good athletes make mistakes; the great ones learn to make that mistake only once.
Raul Lopez

I think football would become an even better game if someone could invent a ball that kicks back.
Eric Morecambe

If we score, we might win. If they never score, we can’t lose.
Christie Rampone

Soccer is a game in which everyone does a lot of running around. Twenty-one guys stand around and one guy does a tap dance with the ball.
Jim Murray

We all fail; the key is knowing how to rise.
Hope Solo

Success is no accident. It is hard work, perseverance, learning, studying, sacrifice and most of all, love of what you are doing or learning to do.
Pelé

To say that these men paid their shillings to watch twenty-two hirelings kick a ball is merely to say that a violin is wood and catgut, that Hamlet is so much paper and ink.
J.B. Priestley

Every time I went away I was deceiving my mum. I’d tell her I was going to school but I’d be out on the street playing football. I always had a ball on my feet.
Ronaldo

If you’re attacking, you don’t get as tired as when you’re chasing.
Kyle Rote, Jr.

If this can be termed the century of the common man, then soccer, of all sports, is surely his game. In a world haunted by the hydrogen and napalm bomb, a football field is a place where sanity and hope are still left unmolested.
Stanley Rous

In football, everything is complicated by the presence of the opposite team.
Jean-Paul Sartre

A champion is someone who does not settle for that day’s practice, that day’s competition, that day’s performance. They are always striving to be better. They don’t live in the past.
Briana Scurry

Some people believe football is a matter of life and death. I’m very disappointed with that attitude. I can assure you it is much, much more important than that.
Bill Shankly

In Latin America the border between soccer and politics is vague. There is a long list of governments that have fallen or been overthrown after the defeat of the national team.
Luis Suarez 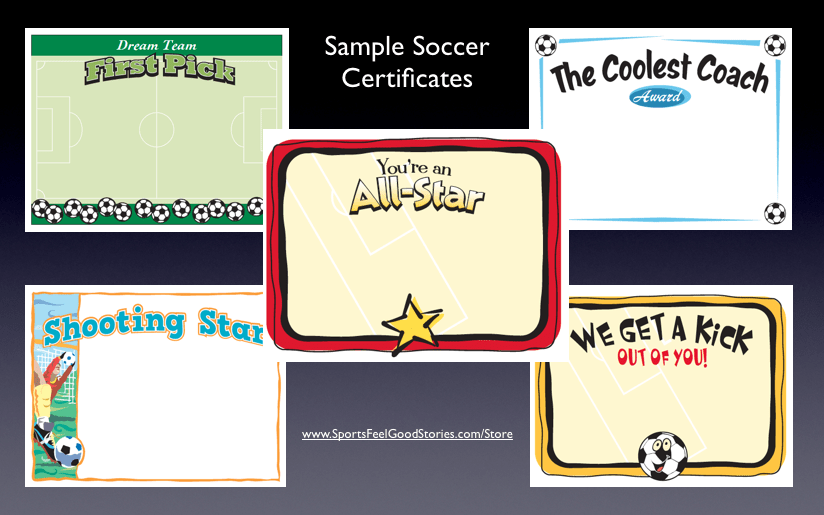 Other countries have their history. Uruguay has its football.
Ondino Viera

If I walked on water, my accusers would say it is because I can’t swim.
Berti Vogts

The rules of soccer are very simple, basically, it is this: if it moves, kick it. If it doesn’t move, kick it until it does.
Phil Woosnam

Do you have a suggestion for an inspirational soccer quote that would fit nicely into our collection? Let us know via the Contact page.