Fans will love these Jared Goff Fantasy Football Team Names, especially if you’re a Rams’ devotee. The rising NFL star threw for over 3,800 yards in 2017 with 28 TDs (with only 7 interceptions) and a passer rating of 100.5. Goff is among the new class of NFL superstar quarterbacks and already a fantasy football favorite.

Goff to See The Wizard.

Hey, You, Goff My Cloud. 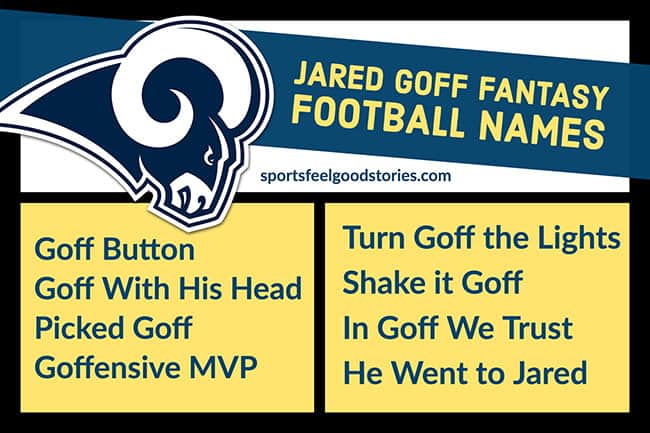 Jared Goff was the first overall pick of the 2016 NFL Draft by the Los Angeles Rams.

A native Californian, Goff was a San Francisco 49ers fan as a child. His favorite player to watch was Joe Montana. Goff wears Montana’s jersey number 16 as a tribute to the Hall of Fame QB.

Goff set 26 different offensive records in three seasons as the quarterback for the University of California football team. He finished second only to Aaron Rodgers in passing efficiency.

His rookie year got off to a slow start, serving as a backup to Case Keenum for the first half of the 2016 season. Goff eventually gained the starting role, losing the final seven games but learning on the job. The next season (2017) the league began to take notice of the strong-armed quarterback as the offense began to click. He led the Rams along with new coach Sean McVay to an impressive 11-5 record.

Turn Your Head and Goff.

Goff graduated from Marin Catholic High School (Kentfield, CA) in 2012. He threw for 7,687 yards in three seasons, completing over 62% of his passes and finishing with 93 touchdowns. His teams finished 39-4 overall and 21-0 in the Marin County Athletic League.

Goff With His Head (or Goff With Their Heads).

In Goff We Trust.

You Can Luck Goff.

He went to Jared.