LaMar Jackson fantasy football team names are trending big time. And, it should come as no surprise. Lamar is enjoying a season like few players ever have. The Baltimore Ravens QB has demonstrated a very high skill level at both running and throwing the ball.

In the process, he has led the Ravens to the highest-ranking team NFL team in 2019, just his second year in the NFL. And, in terms of style points, Jackson performances have been off the charts. 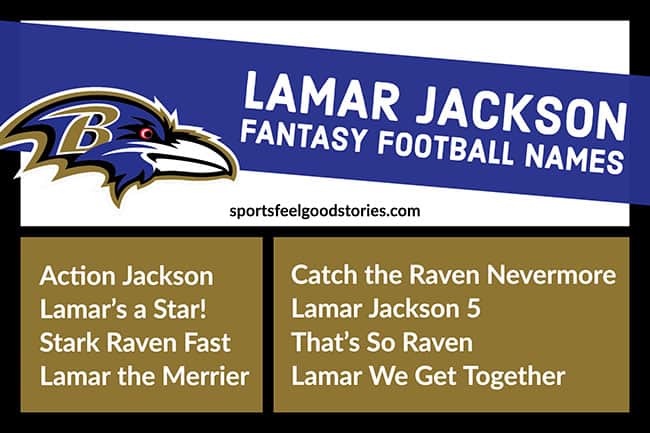 LaMar you kidding me?

The Need for Speed.

LaMar We Get Together.

Lamar Jackson grew up in Pompano Beach, Florida. His father died when he was just eight-years-old leaving his mother to raise Lamar and his siblings. In high school, Lamar could reportedly throw a football 100 yards.

Jackson played quarterback at the University of Louisville. As a sophomore in 2016, he was the Heisman Memorial Trophy, All-American Honors, and the Walter Camp Award. He was drafted by the Baltimore Ravens as the 32nd pick in the first round.

When Raven’s QB Joe Flacco was injured in 2018, Jackson took over the helm and led the Ravens to the playoffs. In his second season, Jackson has been selected as offensive player of the week on four occasions. His electrifying play, highlighted by spectacular runs and deft passing skills has earned him fans from around the country.

The Ravens showed they arrived in 2019 under Jackson’s leadership when they beat the previously unbeaten New England Patriots. In November, they are now the favorite to win the Super Bowl. Jackson is the primary reason for the Ravens’ resurgence.

4.) Heading into the draft, his mother Felicia Jones was his agent.

5.) He was the youngest player at age 21 to start an NFL playoff game.

6.) With a 95 speed rating, Jackson has become the fastest quarterback in Madden Football ever.

7.) At the tender age of 8 years old, Jackson could throw a football 20 yards.

8.) He played college football at Louisville and won the Heisman Trophy and was a unanimous selection for All- American in 2016.

Mike is the editor of Sports Feel Good Stories.