His career has just begun and yet the Saquon Barkley net worth number is already several times greater than most his age will earn in a lifetime. He has an impressive rookie contract to thank for that. In this article, we take a look at the financial condition of the young superstar and his sources of income.

The star running back is off to an impressive start to his NFL career with the New York Giants. Experts project his freakish talent and a great attitude should earn him a place among the greats of all time at his position by the time his career is over.

There’s a very good chance that someday his name will be remembered with the likes of the best in the game: Walter Payton, Jim Brown and Emmitt Smith.

Profession: Running back for the New York Giants

(Estimated based on a variety of sources including nfl.com and overthecap.com) 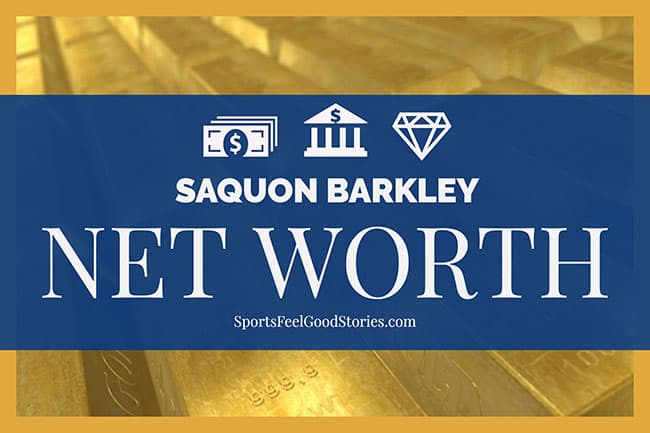 Sources of Saquon Barkley Net Worth

Barkley signed a four-year rookie contract in 2018 with the New York Giants. The Giants will pay him $31.2 million over four years, fully-guaranteed. The deal includes a $20.76 million signing bonus and a $7.96 million roster bonus. The Giants hold an option for the fifth year, but if the young star meets the Giants’ lofty expectations he should receive a new contract offer before then.

Barkley won awards for NFL AP Offensive Rookie of the Year and NFL All-Rookie Team in 2018. The Giants will want to lock in their young superstar for as long as possible.

It is not a stretch to say that Barkley can earn close to $100 million over the course of his career if his pay continues to increase with each new contract. The future is certainly bright for the young superstar. He is off to an impressive start to his career, giving notice to the league that the era of “SaQuads” has begun.

Financial savvy is not often associated with professional athletes. But Saquon Barkley is quite adept at making wise decisions with his money. He decided early on to tuck away his entire NFL salary and not spend it foolishly. He calls it the “Marshawn Lynch method”—using his salary for smart investments and only living off his endorsement income.

Before his rookie debut, Barkley penned a deal with Pepsi to promote the brand and their 2018 NFL Rookie of the Year campaign. As part of the campaign, he appeared in a short TV ad called the “Unreal Rookie Deal” for the company. After his explosive debut season ended, Barkley earned NFL AP Offensive Rookie of the Year honors.

Other major endorsement deals that are sure to keep Barkley from touching his NFL salary include Nike, Visa, Panini America, and Dunkin Donuts.

Barkley is extremely well-liked by fans, teammates and coaches. His number 26 jersey is the best-selling in the NFL, according to the nflshop.com.

New York Giants General Manager Dave Gettleman knows the team picked the right man in the 2018 NFL Draft. He calls Saquon “a special kid” and believes he is “touched by the hand of God.”

Barkley became the all-time rushing touchdown (43) and total touchdown (53) record holder at Penn State. He also finished his collegiate career with the team record for all-purpose yards (5,538). In his sophomore year, Barkley helped his team beat the Wisconsin Badgers 38-31 in the 2016 Big Ten Championship Game. The Nittany Lions played in the Rose Bowl that season, losing to USC 52-49.

The New York Giants selected Saquon Barkley in the 1st round of the 2018 NFL Draft. He was the #2 overall pick that year.

Barkley will be eligible for free agency in 2022 (if the Giants decline to take fifth-year option).

Barkley rushed for over 1300 yards in his rookie campaign. His explosive running style averaged an impressive 5.0 yards per carry with a total of 11 touchdowns for the season.

His freshman season in 2018 led to numerous honors, including being named NFL AP Offensive Rookie of the Year and NFL All-Rookie Team, as well as playing as a reserve running back in the 2019 Pro Bowl in Orlando, FL.

Barkley and his girlfriend Anna Congdon have a daughter named Jada. The couple met when the two attended Penn State University. Saquon’s mother is Tonya Johnson and his father is Alibay Barkley, a former amateur boxer.

His siblings include brothers Ali Barkley and Rashard Johnson, and sisters Shaquona and Aliyah Barkley.

1.) The NFL star running back is known for his impossibly large quadriceps muscles. He recently announced his “Quad Squad Challenge,” daring fans to match his intense workout regimen.

3.) Barkley told his parents from a very young age that he would someday buy them a new house. He made good on the promise before his rookie season began, purchasing a home for them in Whitehall, PA. He stated on his Instagram page “Finally being able to achieve that goal is the most amazing feeling.”

4.) During his early childhood in New York, Barkley’s liked the Jets. His favorite player was the team’s running back Curtis Martin.

“His quads are the size of my waist and whole upper body. I’ve never quite seen anything like it. I don’t often stare at another man’s legs, but in that case, you just can’t quite help it.”

“Barkley is a once in a lifetime talent, teams that pass on this young man will be sorry.”

“At the end of the day, a great player is a great player. He is a touchdown-maker. He is a threat to take it to the house every time he gets his hands on the ball. I think a lot of that stuff is nonsense. I think it is someone who had decided to get into the analytics of it and went through whatever…”

“In baseball, they call it a five-tool player, I don’t know if I’m going to be able to pick five tools, but I have not seen a guy like this in a long time, and I have been around a long time. I have been doing this for 30-plus years. The kid is so unique because of his size and his speed. He has the ability to string together multiple moves. Saquon has the ability to step on the gas. He can do what we call cross the formation.”

At the end of the day, I know I sound like a broken record, but you will hear this for as long as I am in the NFL, as long as I take care of my body, my body will take care of me. I will continue to have my team around me. Obviously, have a great strength staff here and a great training staff here. Have to be a pro outside the facility. Whether it is 350 touches, 400 touches or less touches next year. Whatever I have to do to have this team compete for a championship, I am going to do.

If a Rookie of the Year doesn’t sway that mindset, I don’t know what will.
On fans’ draft regrets.

Sometimes you just got to settle back and relax and be like, ‘All right, Saquon, chill. You know what you’re doing. Just do the little stuff.’ The little stuff will get you there.

We’ve even grown more as a team.
On life without Odell Beckham.

It starts with myself. I have to believe in myself and set expectations for myself, set goals for myself, and continue to work for those goals every day.

High school, going into my junior year, I kind of had the idea I was going to be the starting running back. I was a little smaller, so I decided to gain weight and try to get faster. I wasn’t a fan of the weight room. (And) I thought just the God-given talent would take you where you needed to go. Now I understand that you need hard work.

Whether the ball is on the 99-yard line or the 1-yard line, I’m going to find a way to get into the end zone.

When not trying to replicate Saquon’s workout in half the time, Greg and Mike can be found creating content for Sports Feel Good Stories. 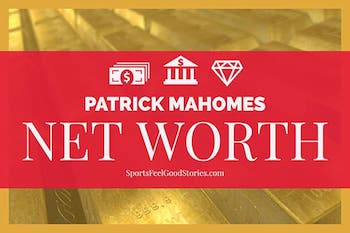