You are here: Home / Joel Embiid Quotes, Net Worth, Height

These Joel Embiid quotes and fast facts will help you learn more about one of the fastest rising stars in the NBA.

The outspoken center of the Philadelphia 76ers, Joel Embiid grew up in Cameroon and played college ball at KU. As the third overall pick in the 2014 NBA draft, Embiid has fought injuries to get on the court, but when he’s been healthy, he’s been a force to reckon with.

2.) I’m Joel. Joel Embiid. I don’t get disrespected. I do the disrespecting.

3.) Having your teammate’s backs – that’s what I feel being a leader is.

5.) I want to get in there and jump in the stands and dive for every loose ball. 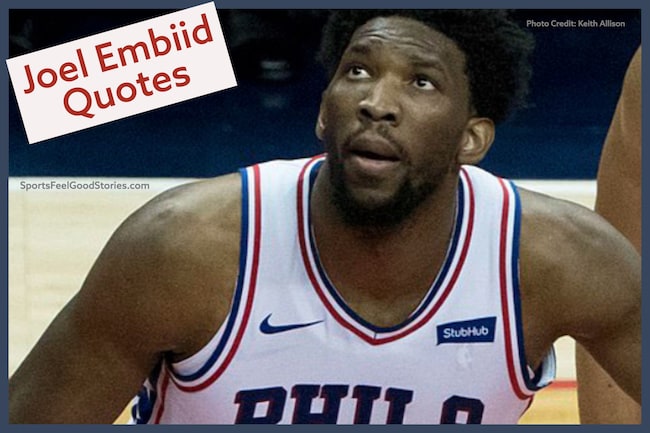 6.) Every time I get on the court, I want to push my teammates to be better as a leader and lead by example.

7.) What I hate the most is when the other team scores.

8.) One thing when I started playing in the league, I saw that a lot of guys are friendly. It’s okay to be friendly, especially off the court. But on the court, I want to dominate.

9.) My coaches sometimes say I’m a little bit too competitive. But I want to win, and I feel like we should win every game.

11.) I found social media was a way for me to open up and show the world who I was and also keep my name out there.

12.) I see a lot of athletes that don’t really use social media, or they’re saying the same stuff. I kind of wanted to change the game.

14.) I’m taking the credit: I have the best social media by far. I just do what I have to do and then I’m out. I’m the best because I’m a savage. I don’t care. I do whatever I want.

15.) The only thing that kept me going was the way that I was raised by my parents. They always told me to keep working, no matter what.

16.) When I play ‘2K’ I’ll play GM Mode. And I choose different teams. But I always trade for me because I’m unstoppable. Literally, there’s no way to stop me in ‘2K’.

17.) I look like I’m not listening, but I’m actually listening. I like listening to everything, observing everybody, just taking everything in, and then in my mind, figuring out what’s good for me and what’s bad for me.

18.) I had this DVD that my coach in Cameroon had mailed to me when I first came to America. It was an hour-long tape of Hakeem Olujawon and some other legendary big men. I probably watched that DVD every single day for three years. I would study the way Hakeem moved, and I would go out and try to imitate him.

19.) Somehow, I convinced myself I was Hakeem. And I started getting better and better. And then I sort of started killing it.

20.) I pretended my way to the NBA. I seriously got to the league by watching YouTube and living in the gym. There’s no other way to explain it.

21.) Hell of a season. Proud of my guys and I appreciate all the support you guys gave us all season long. Extremely disappointed and fell short of our goal but this is the motivation I needed and best believe I’ll be back even better and stronger. #TheProcess

22.) I own a lot of real estate in @andredrummondd head and I’m on my way to build more. #bum #TheProcess

23.) I think it would’ve been a little easier growing up in America; they’ve got better conditions for basketball players. At the same time, many people have said to me that having to start playing so late helped me not pick up bad habits.

25.) Being in this city, they’ve been looking for a team to win. I’m glad the Eagles have been doing so. I think it’s our turn.

26.) What a blessing! I started playing basketball in 2011 and it was here in South Africa. Here I am lucky enough to represent Cameroon and the whole continent of Africa.

NBA and its Fans

27.) Well well the NBA is nuts and also the best league LMAO.

28.) Man Sixers fans are the best… I really appreciate y’all… The love and the passion that y’all have is kinda insane but I love it!

29.) The Lakers are FOREVER gonna be Kobe’s and Magic’s teams… Process that.

30.) The Process is never going to end. It’s an ongoing thing. I don’t think it’s ever going to stop. As I have explained before, it’s a process for us making the Playoffs, it’s another one to make the conference finals, another one to actually go to the Finals and win the Championship.

31.) I like playing on the road and quieting the crowd. I love it.

32.) I’m not cocky, I’m humble, but I think I can be really special, one of the top players in the league.

33.) If somebody teaches me the point guard position, I feel like I’d be able to play it.

34.) I started playing basketball so late, it just means that anything is possible.

35.) Every time I’m on the court, every time a fan cheers for me, I just want to go out and make a play for them to cheer even more.

How old is Joel Embiid?

What languages does Joel Embiid speak?

Embiid speaks three languages: French, English, and Basaa, a Bantu dialect native to Cameroon. He is also in the process (see what I did there?) of learning Portuguese.

How much is Joel Embiid’s NBA contract worth?

What is Joel Embiid’s annual salary?

If you divide his $148 million dollar deal for 5 years equally, his annual salary is $29.6 million. That’s a lot of Shirley Temples.

His net worth is estimated to be $160 million.

Tom is a sportswriter based in the Twin Cities and has been blogging for some 10 years.