This collection of Benjamin Franklin quotes includes insights on health, wealth and wisdom. Many of the quotations attributed to him, and especially the aphorisms, are ones that Franklin “collected from many ages and nations.” They weren’t originally written by Franklin.

Franklin wrote in his autobiography, “Why then should I give my readers bad lines of my own, when good ones of other people’s are so plenty?” These Benjamin Franklin quotes are packed with knowledge. Learn from others, and sit down and have a read.

It is easier to prevent bad habits than to break them.
Speak ill of no man, but speak all the good you know of everybody.

Genius without education is like silver in the mine.

Diligence is the mother of good luck.

You may delay, but time will not.

To the generous mind, the heaviest debt is that of gratitude, when it is not in our power to repay it.

Do not fear mistakes. You will know failure. Continue to reach out.

A man wrapped up in himself makes a very small bundle.

You may delay, but time will not.


Beer is proof God loves us and wants us to be happy.

(Note: Franklin never really ever wrote this about beer. He wrote it about wine. Perhaps, further proof that beer lovers are quick to adapt good thinking.)

Guests, like fish, begin to smell after three days.

He that lieth down with dogs will rise up with fleas.

Love, a cough, and a smoke can’t well be hidden.

Anger is never without a reason, but seldom a good one.

God heals, and the doctor takes the fee.

Any fool can criticize, condemn and complain and most fools do.

When in doubt, don’t.

An investment in knowledge pays the best interest.

One today is worth two tomorrows.

Time is money. (Perhaps the most used of these Benjamin Franklin quotes) 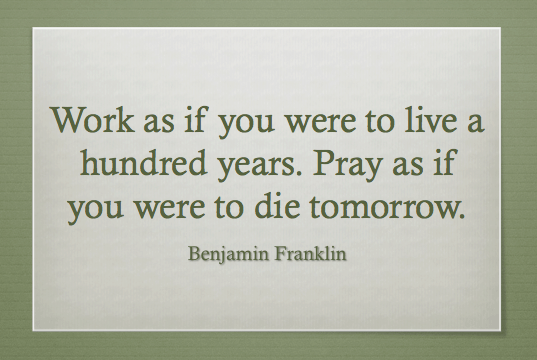 
The wolf sheds his coat once a year, his disposition never.

Men and melons are hard to know.

The cat in gloves catches no mice.

Look before, or you’ll find yourself behind.

The world is full of fools and faint hearts; and yet everyone has courage enough to bear the misfortunes, and wisdom enough to manage the affairs, of his neighbor.

Perhaps the history of the errors of mankind, all things considered, is more valuable and interesting than that of their discoveries.

Remember not only to say the right thing in the right place but far more difficult still, to leave unsaid the wrong thing at the tempting moment.

Three can keep a secret if two are dead.

Beware the hobby that eats. (These Benjamin Franklin quotes are reflective of the times when many folks were farmers and horse owners.)

Genius without education is like silver in the mine.

Those who surrender freedom for security will not have, nor do they deserve, either one.

Distrust and caution are the parents of security.

They who can give up essential liberty to obtain a little temporary safety deserve neither liberty nor safety.

He that is of the opinion that money will do everything may well be suspected of doing everything for money.

Money has never made man happy, nor will it, there is nothing in its nature to produce happiness. The more of it one has the more one wants.

Beware of little expenses. A small leak will sink a great ship.

Creditors have better memories than debtors.

He does not possess wealth; it possesses him.

Early to bed and early to rise makes a man healthy, wealthy, and wise.

Creditors are a superstitious sect, great observers of set days and times.

Who is wise? He that learns from everyone.
Who is powerful? He that governs his passions.
Who is rich? He that is content.
Who is that? Nobody.

There are three faithful friends,
An old wife, an old dog, and ready money.

Wealth is not his that has it, but his that enjoys it.

He that waits upon fortune, is never sure of a dinner.

Poverty wants some things, luxury many things, avarice all things.

Employ your time well, if you mean to get leisure.

Diligence is the Mother of Good Luck.

If you would know the value of money, go try to borrow some; for he that goes a-borrowing goes a-sorrowing.

Nothing but money is sweeter than honey.

If you would be wealthy, think of saving as well as getting.

(Note that Franklin’s writings cover a wide variety of topics of the day.)

In general, mankind, since the improvement of cookery, eats twice as much as nature requires.

Wine is constant proof that God loves us and loves to see us happy.

Don’t misinform your doctor nor your lawyer.

If passion drives you, let reason hold the reins.

Beauty and folly are old companions.

Your net worth to the world is usually determined by what remains after your bad habits are subtracted from your good ones.

We are all born ignorant, but one must work hard to remain stupid.

Eat to live, and not live to eat.

I wake up every morning at nine and grab for the morning paper. Then I look at the obituary page. If my name is not on it, I get up.

To lengthen thy life, lessen thy meals.

As a writer, scientist, inventor and more, Benjamin Franklin is a renowned polymath.

Who is wise? He that learns from everyone.

Love your neighbor, but don’t pull down your hedge.

Take it from Richard, poor and lame, what’s begun in anger ends in shame.

Observe all men, thyself most.

He’s a fool that cannot conceal his wisdom.

The doors of wisdom are never shut.

He who falls in love with himself will have no rivals.

If you would have a faithful servant, and one that you like, serve yourself.

Keep your eyes wide open before marriage, half shut afterward.

Tell me and I forget, teach me and I may remember, involve me and I learn.

Diligence is the mother of good luck.

Cut off all unnecessary actions.

A life of leisure and a life of laziness are two things. There will be sleeping enough in the grave.

Never leave that till tomorrow which you can do today.

Sloth makes all things difficult, but industry, all things easy. He that rises late must trot all day, and shall scarce overtake his business at night, while laziness travels so slowly that poverty soon overtakes him.

Energy and persistence conquer all things.

Our new Constitution is now established, everything seems to promise it will be durable; but, in this world, nothing is certain except death and taxes.

When the well’s dry, we know the worth of water.

He’s a fool that makes his doctor an heir.

An egg today is better than a hen tomorrow.

God works wonders now and then; Behold a lawyer, an honest man.

What maintains one vice would bring up two children.


Life’s tragedy is that we get old too soon and wise too late.

In this world, nothing can be said to be certain, except death and taxes.

A house is not a home unless it contains food and fire for the mind as well as the body.

Do you love life? Then do not squander time, for that’s the stuff life is made of.

A soft tongue may strike hard.

Eat to please thyself, but dress to please others.

Those who in quarrels interpose must often wipe a bloody nose.

To err is human, to repent divine, to persist devilish.

Necessity never made a good bargain.

A great empire, like a great cake, is most easily diminished at the edges.

Beware of the young doctor and the old barber.

Don’t throw stones at your neighbors if your own windows are glass.

It is as true folly for the poor to ape the rich, as for the frog to swell, in order to equal the ox. It is hard for an empty bag to stand upright.

He that lies down with dogs shall rise up with fleas.

Blessed is he that expects nothing, for he shall never be disappointed.

After 3 days men grow weary, of a wench, a guest and weather rainy.

Let thy child’s first lesson be obedience
And the second may be what thou wilt.

He that can have patience can have what he will.

He that would live in peace and at ease must not speak all he knows or all he sees. Author’s note: Words of wisdom are featured in these Benjamin Franklin Quotes. You can learn a lot.

If you will not hear reason, she will surely rap your knuckles.

Teach your child to hold his tongue,
He’ll learn fast enough to speak.

There never was a good war or a bad peace.

The absent are never without fault, nor the present without excuse.

We must hang together, gentlemen…else, we shall most assuredly hang separately.

Speak ill of no man, but speak all the good you know of everybody.

Mike is an author and editor of Sports Feel Good Stories.

Any suggestions for Benjamin Franklin Quotes? Let us know on the Contact page. Thanks.