Our Mark Twain quotes feature the noted author at his finest. The writer of Huck Finn and Tom Sawyer had a way with words. Samuel Clemens – Twain’s real name – was born in 1835 and died in 1910. And in between, he seemed to be either writing or saying something important frequently. Enjoy the wit and wisdom that shine in these Mark Twain quotes.

Go to Heaven for the climate, Hell for the company.

It usually takes me more than three weeks to prepare a good impromptu speech.

If we would learn what the human race really is at the bottom, we need only observe it in election times.

Action speaks louder than words but not nearly as often.

Repartee is something we think of twenty-four hours too late.

Always do right; this will gratify some people and astonish the rest.

In the first place, God made idiots. That was for practice. Then he made school boards.

All generalizations are false, including this one.

When angry, count to four; when very angry, swear.

Get your facts first, then you can distort them as you please.

Man is the only animal that blushes. Or needs to.

Be good and you will be lonesome.

Work is a necessary evil to be avoided.

I didn’t attend the funeral, but I sent a nice letter saying I approved of it.

A lie can run around the world six times while the truth is still trying to put on its pants.

There are lies, damned lies, and statistics. 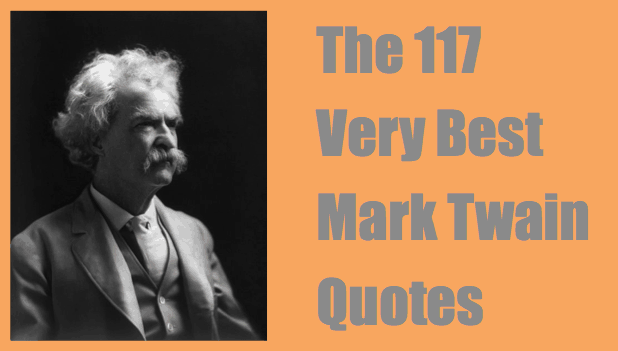 It is by the goodness of God that in our country we have those three unspeakably precious things: freedom of speech, freedom of conscience, and the prudence never to practice either of them.

Good friends, good books and a sleepy conscience: this is the ideal life.

Let us be thankful for the fools. But for them, the rest of us could not succeed.

The man with a new idea is a crank until the idea succeeds.

A human being has a natural desire to have more of a good thing than he needs.

Let us so live that when we come to die even the undertaker will be sorry.

Don’t part with your illusions. When they are gone you may still exist, but you have ceased to live.

To believe yourself brave is to be brave; it is the only essential thing.

Against the assault of laughter, nothing can stand.

The trouble ain’t that there are too many fools, but that the lightning ain’t distributed right.

Hunger is the handmaid of genius.

The only reason why God created man is because he was disappointed with the monkey.

Be virtuous and you will be eccentric.

Necessity is the mother of taking chances.

Nothing so needs reforming as other people’s habits.

To succeed in life, you need two things: ignorance and confidence.

Prosperity is the best protector of principle.

Courage is resistance to fear, mastery of fear, not absence of fear.

No sinner is ever saved after the first twenty minutes of a sermon.

Never put off ‘til tomorrow what you can do the day after tomorrow.

Be careless in your dress if you must, but keep a tidy soul.

Wrinkles should merely indicate where smiles have been.

There are several good protections against temptation, but the surest is cowardice.

If the world comes to an end, I want to be in Cincinnati. Everything comes there ten years later.

Patriotism is supporting your country all the time, and your government when it deserves it.

When we remember we are all mad, the mysteries of life disappear and life stands explained.

There are no grades of vanity, there are only grades of ability in concealing it.

Modesty died when clothes were born.

Good friends, good books, and a sleepy conscience: this is the ideal life.

Name the greatest of all inventors. Accidents.

Giving up smoking is the easiest thing in the world. I know because I’ve done it thousands of times.

The lottery is a government institution and the poor its best patrons.

Everyone is a moon and has a dark side which he never shows to anybody.

Truth is stranger than fiction, but it is because Fiction is obliged to stick to possibilities; Truth isn’t.

Never put off until tomorrow what you can do the day after tomorrow.

Praise is well, a compliment is well, but affection – that is the last and final and most precious reward that any man can win, whether by character or achievement.

A man who carries a cat by the tail learns something he can learn in no other way.

Man was made at the end of the week’s work when God was tired.

A habit cannot be tossed out the window; it must be coaxed down the stairs a step at a time.

The best way to cheer yourself up is to try to cheer somebody else up.

All good things arrive unto them that wait – and don’t die in the meantime.

How empty is a theory in the presence of fact!

Few things are harder to put up with than the annoyance of a good example.

Clothes make the man. Naked people have little or no influence on society.

The rule is perfect: in all matters of opinion, our adversaries are insane.

Plain questions and plain answers make the shortest road out of most perplexities.

One of the most striking differences between a cat and a lie is that a cat has only nine lives.

Nothing is made in vain, but the fly came near it.

When you fish for love, bait with your heart, not your brain.

One is apt to overestimate beauty when it is rare.

There is a charm about the forbidden that makes it unspeakably desirable.

Love is a madness; if thwarted it develops fast.

Let us make a special effort to stop communicating with each other, so we can have some conversation.

Virtue has never been as respectable as money.

Honesty is the best policy – when there is money in it.

What is the difference between a taxidermist and a tax collector? The taxidermist takes only your skin.

There are two times in a man’s life when he should not speculate: when he can’t afford it, and when he can.

The lack of money is the root of all evil.

A successful book is not made of what is in it, but of what is left out of it.

My books are water; those of the great geniuses are wine — everybody drinks water.

Substitute ‘damn’ every time you’re inclined to write ‘very’; your editor will delete it and the writing will be just as it should be.

I have never let my schooling interfere with my education.

Classic: A book which people praise and don’t read.

Whenever you find yourself on the side of the majority, it is time to pause and reflect.

Frankness is a jewel; only the young can afford it.

Why is it that we rejoice at a birth and grieve at a funeral? It is because we are not the person involved.

When I was younger I could remember anything, whether it happened or not.

Good breeding consists in concealing how much we think of ourselves and how little we think of the other person.

Part of the secret of a success in life is to eat what you like and let the food fight it out inside.

It’s better to keep your mouth shut and appear stupid than open it and remove all doubt.

Only kings, presidents, editors, and people with tapeworms have the right to use the editorial ‘we.’

Why is it that we rejoice at a birth and grieve at a funeral? It is because we are not the person involved.

The human race is a race of cowards, and I am not only marching in that procession but carrying a banner.

The public is merely a multiplied ‘me.’

Sanity and happiness are an impossible combination.

It is easier to stay out than get out.

The heart is the real fountain of youth.

Only one thing is impossible for God: To find any sense in any copyright law on the planet.

There are people who can do all fine and heroic things but one: keep from telling their happiness to the unhappy.

It is better to remain silent and be thought a fool than to open one’s mouth and remove all doubt.

Kindness is the language which the deaf can hear and the blind can see.

Anger is an acid that can do more harm to the vessel in which it is stored than to anything on which it is poured.

Life would be infinitely happier if we could only be born at the age of eighty and gradually approach eighteen.

A man’s character may be learned from the adjectives which he habitually uses in conversation.

Keep away from people who try to belittle your ambitions. Small people always do that, but the really great make you feel that you, too, can become great.

Action speaks louder than words but not nearly as often.

Cauliflower is nothing but cabbage with a college education.

George Washington, as a boy, was ignorant of the commonest accomplishments of youth. He could not even lie.

I was gratified to be able to answer promptly, and I did. I said I didn’t know.

It is better to deserve honors and not have them than to have them and not deserve them.

Patriot: the person who can holler the loudest without knowing what he is hollering about.

Do not tell fish stories where the people know you; but particularly, don’t tell them where they know the fish.

The most interesting information comes from children, for they tell all they know and then stop.

The reports of my death have been greatly exaggerated.

When I was younger I could remember anything, whether it happened or not.

It is good to obey all the rules when you’re young, so you’ll have the strength to break them when you’re old.

There is no sadder sight than a young pessimist, except an old optimist.

The fear of death follows the fear of life. A man who lives fully is prepared to die at any time.

Better to remain silent and be thought a fool than to speak and to remove all doubt.

The people who are really great are not those who try to belittle your ambitions but those who make you feel that you too can become great.

Mike is an author and founder of Sports Feel Good Stories.